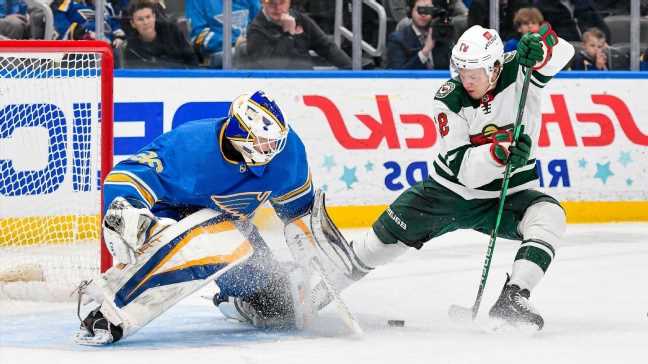 Hockey betting 101: How to bet the 2022 Stanley Cup playoffs

The 2022 Stanley Cup Playoffs begin on Monday night. Thanks to the legalization of single-game sports betting across North America, this could be the most heavily wagered-on postseason in NHL history.

Betting on hockey isn’t nearly as prevalent as the wagering on other major sports in the U.S. As of Oct. 2021, the average MLB game draws five times as much betting handle as the average NHL game at the SuperBook at Westgate Las Vegas. Some of that barrier to entry is simply not knowing about all the various ways one can wager on an NHL game.

Here’s a guide to wagering on the NHL, with some specific advice on betting the Stanley Cup Playoffs that will help the newbies and the puckheads.

Odds as of Monday from Caesars Sportsbook.

What are the primary bets on hockey?

The most popular wager on the NHL is the moneyline bet. That’s essentially betting on a team’s odds to win the game outright. Let’s say you like the Minnesota Wild to defeat the St. Louis Blues in Game 1 of their series, and the Wild are a -140 favorite to win that game. Bet $20 and the payout is just over $34. But on the other hand, let’s say you like the underdog Blues here and they’re +115 to win the game. Your $20 will net you $43 if they win.

The next most popular bet is the “puck line.” (Some people call it the “goal line,” but that’s a little confusing given there’s an actual “goal line” on the ice in hockey.) This is essentially “betting the spread” for hockey, where you get odds based on a team winning or losing by a certain number of goals. Given the number of one-goal games there are in a typical NHL season, the puck line is usually plus or minus 1.5 goals. This can change if there’s a lopsided matchup or if money is flooding in on one result.

It can also change via your wager, as “alternate puck lines” are available with longer or shorter odds. Let’s say you’re really confident that the Wild will blow out the Blues by three or more goals. You can take an “alternate puck line” of minus 2.5 goals for +300 – a $20 bet would net you $80. But let’s say you’re not buying the hype and you think the Blues will win the game by two or more goals. That “reverse puck line” of Blues minus 1.5 goals gets you +290 odds, so a $20 bet would net you $78.00.

The other popular hockey bet is the total, commonly known as the “over/under” for a game. The total number of goals in an NHL game is usually set between 5 goals and 6.5 goals. However this season, in which the NHL saw its highest average total goals per game (6.3) since the 1995-96 season, bettors saw those totals jump to 7.5 total goals depending on the matchup.

This is another wager where alternative totals can get bettors friendlier odds if, say, one result is more heavily favored than another. Going back to our Central Division friends, the Blues and Wild. Their total was six goals in Game 1, and a $20 bet at -130 on the over would win around $35. But let’s say you think this is going to be a classic playoff defensive struggle. You can adjust the total down to five goals, bet the under at +240 and a $20 bet wins around $68.

The 2022 Stanley Cup playoffs begin Monday night on the networks of ESPN, and you can catch all the action from now until Lord Stanley’s Cup is raised right here.

What are some of the other ways to bet on NHL games?

One of the NHL’s challenges in attracting more sports fans to wager on hockey? Convincing them that there’s more to bet that who wins, by how many and how many goals will be scored in the game.

There’s been a prop betting boom in the NHL over the last few seasons, such as:

Player props: Most of the familiar names in an NHL game will have stat props attached to them, where you can wager an over/under bet on their total number of goals, assists and points for a game.

One of our favorite wagers is betting on shot totals. Goals contain a lot of variables, from the play of teammates to the actions of the opposing goaltender. While shots can go wide or get blocked, it’s a more controllable outcome and a more predictable one based on a player’s typical shot generation.

Same goes for goalies and betting save totals. You can base it on the defense in front of them or the expected game situation, e.g., if his team is leading in the third period, there’s a good chance he’ll still be facing multitudes of shots. There are also wagers on when a player scores and player vs. player props.

Much more will be available through the NHL’s puck and player tracking technology, like the distance a player traveled in a game. Sportsbooks have already licensed that data.

Team props: Arguably the most popular team prop get is total goals, as in not for the game, but for an individual team. This is a good wager if you think you know how one team will perform in the game but you’re not sure how the opponent will hold up their end of the scoring bargain on your game total bet. For example, you might not be convinced that the Blues and Wild will combine for over six goals, but you’re certain the Wild won’t score four or more. So you can get -140 odds that Minnesota will score under 3.5 goals, which is typically the number of goals set for a home favorite.

There are also prop bets for when a team scores.

Game props: From 2019-21, 22.8% of games went to either overtime or a shootout. There’s a prop bet for that, too: betting on whether a game will end in regulation or go to extra time. You can also wager on whether a team will win the game in regulation, which offers better odds than a moneyline wager that covers regulation and overtime. The Colorado Avalanche are a massive favorite (-320) to win Game 1 against the Nashville Predators, but betting they’ll win in the first 60 minutes of play lowers those odds to -215.

Period Props: One bet growing in popularity is making traditional game wagers – money line, puck line and total goals – in an individual period. With a season’s worth of data, you can find out that some teams start well and some teams finish well. A period puck line is usually just minus 0.5 goals, meaning that a one-goal advantage in period scoring will win the bet at a good price. You can also bet that the period will be a draw.

Game props also feature more “coin flip” type bets, like whether the final total will be even or odd. (Bet as you’d like, but we’d rather separate our hockey-style bets from our roulette-style bets.)

What are some of the future bets on the Stanley Cup Playoffs?

There are dozens of ways to stay engaged as the games fly by in the playoffs. They range from traditional bets like which team will win the series to different alternatives wagers on the series.

You can bet on how many games a series will go or what the exactly final score of a series will end up being. Some sportsbooks allow for bettors to wager on a team winning a specific game as well as the series.

Looking even further, there are bets on who will win each conference and who will ultimately win the Stanley Cup, plus who will win the Conn Smythe Trophy as playoff MVP. There are also tantalizing odds for picking the two teams that make the Final and the winner. Like the Toronto Maple Leafs to beat the Blues for the Cup? A $20 wager will win you over $2,000.

Who are the favorites to win the Stanley Cup and playoff MVP?

The favorites to win the Conn Smythe as playoff MVP are Nathan MacKinnon of the Avalanche, Jonathan Huberdeau and Aleksander Barkov of the Panthers (+1200).

Made it this far down and think you can pick the playoff winners? Test your NHL picking skills against the hosts and fans of The Point, Daily Wager, First Take and more right here when you play our free Playoff Hockey Pick’em game.

Better Call Saul season 6 episode 4 release time: When is the next episode out?