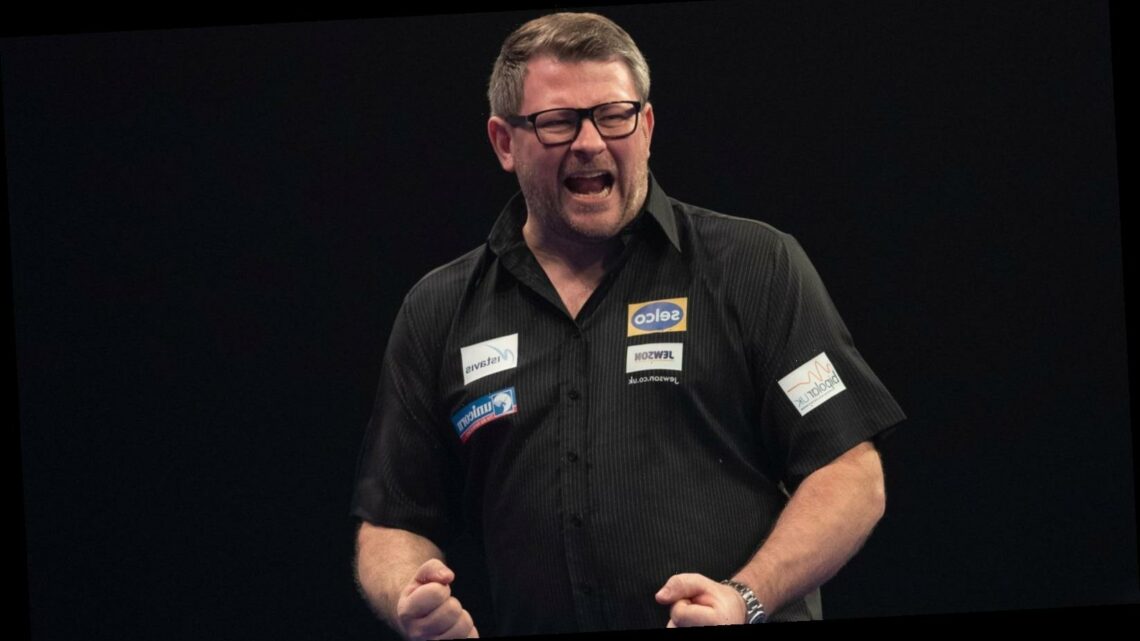 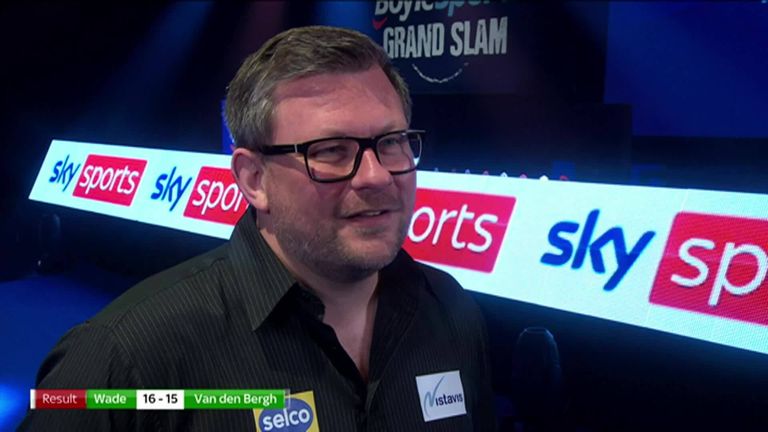 James Wade produced a stirring fightback to reach a third Grand Slam of Darts final with victory over Dimitri Van den Bergh and waiting for him will be debutant Jose De Sousa whose fairy tale run in Coventry continues.

A thrilling eight days in Coventry have delivered darting drama, and semi-final Monday was no different as The Machine fought back from 9-5 and 14-12 down to win a last leg shoot-out against Van den Bergh to book his final place.

Wade, runner-up to Scott Waites 10 years ago and again to Michael van Gerwen in 2016, never led in his contest with the World Matchplay champion but a brilliant 12-dart leg moments after Van den Bergh had missed a dart for the match sealed the deal.

Standing in his way is De Sousa, the first Portuguese player to reach a major PDC final and who two years ago was a carpenter. But victory over Simon Whitlock capped a whirlwind ascent that has seen him claim three PDC ranking titles in the last 18 months and now reach a major televised title alongside the biggest pay-day of his career. 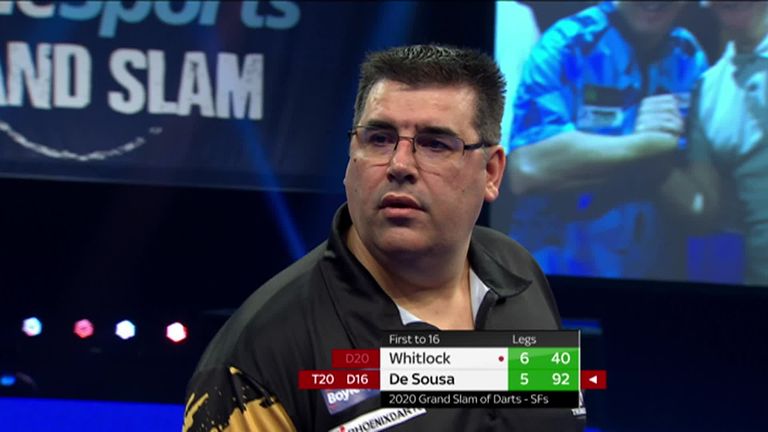 James Wade remains on course for a 10th major televised title after typically efficient performance saw him weather an early barrage from Dimitri Van den Bergh to edge out the Belgian in the final leg of a gripping encounter. Van den Bergh, who claimed his first major title behind closed doors at the World Matchplay in July, had looked on course to add another big final to his ever-growing CV when he seized an early advantage that he did not relinquish until the closing stages.

The Dreammaker had been rock solid on his throw to open up a significant early lead, and then hold off Wade’s first attempt at a comeback, but he faltered down the stretch as Wade finally reeled him in and only grabbed the lead when he crossed the finish line.

An opening 160 served notice of Van den Bergh’s intent and his greater success on the doubles ensured he had a 4-1 lead at the first break. The Belgian pinned five of eight darts to double, while Wade was successful once from nine attempts.

Van den Bergh broke for a second time on his way to a 7-3 lead and a brilliant 101 finish saw him open up a 9-5 lead in the race to 16. But Wade refused to cower and started to chip away at the younger man’s advantage, winning the 18th leg for a 14-dart break of throw. 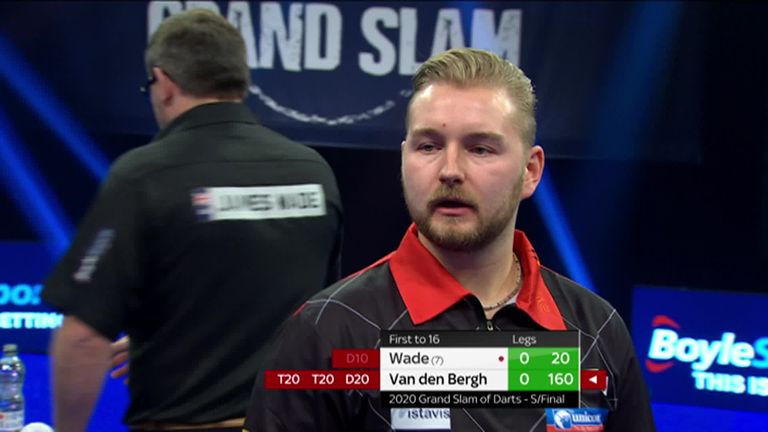 The Machine backed it up to close within one before missing a dart to level at 13-13. That looked costly when Van den Bergh mopped up to move within two of the final before missing three for a 15-13 lead and allowing Wade to level for the first time since the match got underway,

Fittingly, the pair shared the next two and the game went the distance after Wade pinned double six to force the decider when Van den Bergh’s dart at bullseye for the match fell short. Wade returned to pin double four for a nerveless hold of throw that saw him over the finish line.

Jose De Sousa continued his astonishing rise through to the PDC ranks, marking his first major semi-final on his debut in the tournament with a magnificent 16-12 victory over Simon Whitlock.

It means for the third tournament in the last five months, Whitlock has ended Michael van Gerwen’s title hopes only to fall short in the very next game.

Fresh from hitting a tournament-record 20 maximums 180s in his win over Van Gerwen, Whitlock fired four in the opening exchanges on his way to a 3-2 lead. In a high-class start, both men averaged more than 100 but Whitlock was relentless as 14 and 12-dart legs took him into a 5-2 lead.

However, the Portuguese sensation has shown himself to be calm in a crisis and his response was an 11-dart break of throw followed by back-to-back legs for the first time in the match. Whitlock kept his nose in front with a nervy 17-dart leg, the first time any leg had gone more than 15 darts in a high-quality affair, but that was as good as it got for the Wizard

De Sousa took the next four on his way to leading for the first time, turning a 5-2 deficit into an 8-6 advantage with a spectacular double-double finish on 18s giving him the initiative as Whitlock wobbled.

Mistakes began to creep in as Whitlock levelled the match at 8-8, with both men halfway to the required 16.

De Sousa’s rise has been accompanied by the occasional counting problem and they returned as he bust 126 to hand Whitlock a chance. It was a chance he could not take and De Sousa maintained a two-leg lead with a crucial break of throw thanks to a stunning 121 finish.

De Sousa pulled a dart for a three-leg lead but when Whitlock could not take out 81, The Special One had his biggest lead of the contest and was within four legs away from the final.

Another showpiece double-double finish, this time on tops moved De Sousa into a 13-10 lead, forced Whitlock to dig deep. A 140 finish from the Wizard threatened to stir him into the life, but De Sousa was unfazed, taking out 121 for the second time to stand within two of the final.

Whitlock was 15-13 down against Van Gerwen and saw the Dutchman miss a host of darts for the match, and when De Sousa missed five at 15-11, the Aussie may have sniffed a chance. But a brilliant 171 teed up the chance to win the biggest match of his career and he pinned double 16 to seal a memorable win, at least £65,000 in prize money and a place in the world’s top 20.

Don’t miss a dart from the Grand Slam of Darts on Sky Sports as the action reaches its conclusion on Tuesday – join us from 6pm for the final on Sky Sports Arena and follow us @SkySportsDarts for updates and clips throughout the tournament.

Trump Frees Up Government Agency for Biden Transition, but Not Conceding
World News