Let the record show that Jacob deGrom was the first pitcher subjected to a mandatory search by umpires under Major League Baseball’s new police state. The league decided to start with the best on Monday and work its way down.

DeGrom, the Mets’ fragile but incomparable ace, needed no Jedi mind tricks to pass through his inspection point after the top of the first inning. These weren’t the substances M.L.B. was looking for.

“What all do you guys need?” deGrom said he asked the plate umpire, Ben May, and the crew chief, Ron Kulpa, on his way back to the dugout.

“Glove, hat and belt,” they replied, and deGrom did as told.

“I handed them that stuff and went along my way,” he said.

For deGrom, that meant dominating to the point of absurdity again. He worked five shutout innings of a 4-2 victory over the Atlanta Braves, allowing two walks and one hit — a double that fell on the warning track between two outfielders. He extended his streak of scoreless innings to 30. He has 50 strikeouts in that stretch, and has allowed eight hits and three walks. His season earned run average: 0.50.

DeGrom is almost too powerful for his own good. He was the only batter in the Mets’ lineup on Monday — in either game of a doubleheader they split against Atlanta — with an average above .250. But hitting .407, alas, takes a toll on a guy; deGrom showed bunt in his one at-bat, then swung carefully on a soft fly out with two men on.

(Forgive the tangent, but that comment only underscores how astounding Shohei Ohtani has been for the Los Angeles Angels, as both an elite starter and the majors’ pre-eminent slugger. Then again, it took three injury-marred seasons for the full Ohtani to blossom. Baseball is a hard game.)

The Mets pulled deGrom for a pinch-hitter after 70 pitches on Monday — a smart move, he said, after the shoulder discomfort that forced him from his last start after three perfect innings. This isn’t a run like those of Bob Gibson in 1968, Steve Carlton in 1972, Fernando Valenzuela in 1981 or Orel Hershiser in 1988. Complete games, even in a seven-inning format, are decidedly rare in this max-effort era.

But when deGrom is on the mound, however long he lasts — well, that is how greatness looks. The doses are smaller than they were in the past, but the effect is no less powerful. To witness an athlete performing on such an elevated plane is part of the joy of sports. 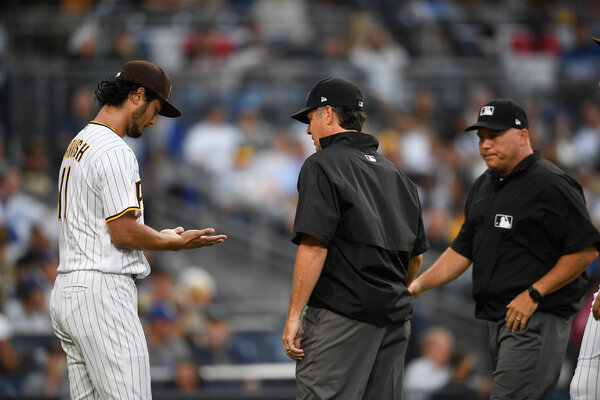 The problem, in baseball’s view, is that too many other pitchers have figured out how to overpower hitters. DeGrom would stand out no matter what, but when almost every team has an army of fungible power arms, it dulls the wow factor.

Through the weekend, teams were averaging 8.92 strikeouts per game this season, the highest rate ever. Hits were down to 7.91 per game, matching 1968 for the lowest rate in more than a century. In an effort to balance things out, M.L.B. has targeted spin rates and the gripping agents that have helped them rise — all foreign substances (besides rosin), not simply the notorious Spider Tack.

Monday was the first day of enhanced enforcement, with umpires inspecting each pitcher for sticky splotches. Violators will get a 10-game suspension with pay, and their teams will be a player short in their absence.

“The biggest thing we wanted to reiterate is if you get popped, we can’t replace you,” Braves Manager Brian Snitker said. “That’s a big deal. I think everybody’s aware of what’s going on and how serious it is to not mess around and get suspended, because that’s a definite blow to your club.”

Pitchers are dismayed, and not just the fringe guys whose unnatural spin got them to the majors. Many veterans have grown deeply suspicious of the league — from last summer’s tedious negotiations on returning to play to the inconsistencies with the ball to the refusal by some teams to invest in veteran talent.

Policing all sticky stuff in the middle of a season, without a viable alternative, is only the latest battleground. Luis Rojas, the Mets’ manager, said he wondered what would happen if a pitcher’s sunscreen accidentally dripped onto the ball. The veteran reliever Trevor May said the long-accepted — if technically illegal — combination of sunscreen and rosin was a harmless and timeless aid.

“It feels a little bit like the backside of a sticker, maybe not even that adhesive,” May said. “It’s very light and it goes away, like you touch it once, you throw a ball and it’s gone. It doesn’t do much. If anything, it’s for consistency. Basically, every time they go out there, pitchers just want to limit the number of variables. That’s why that’s been around forever, because it’s two legal substances that aren’t foreign substances on a baseball field.”

May said substances that produce extreme spin rates should clearly be banned. But he added that most pitchers were simply trying to make up for the inconsistent feel to the baseballs, which are rubbed with mud before each series.

“They put them in those cloth bags, and if the balls are caked, they dry and the dust falls to the bottom — so the farther you get to the bottom of the bag, the more dusty they are,” May said. “Sometimes you get dusty ones and you’re like, ‘Man, today’s a dusty ball day,’ because you’re in the bottom half of a bag on the last day of a series, and it’s a day game and you’re sweating. That’s just a recipe for disaster.”

Players will learn to adjust, as they always do, and the biggest impact may not be felt until the off-season. That is when the increasingly aggravated players must negotiate a new collective bargaining agreement with a league they mistrust.

We will be wishing then for warm summer days like Monday, when the greatest pitcher on the planet spun his magic, with nothing to hide.

Who will England play in Euro 2020 last 16? Likely opponents if they win, lose or draw vs Czech Republic
World News