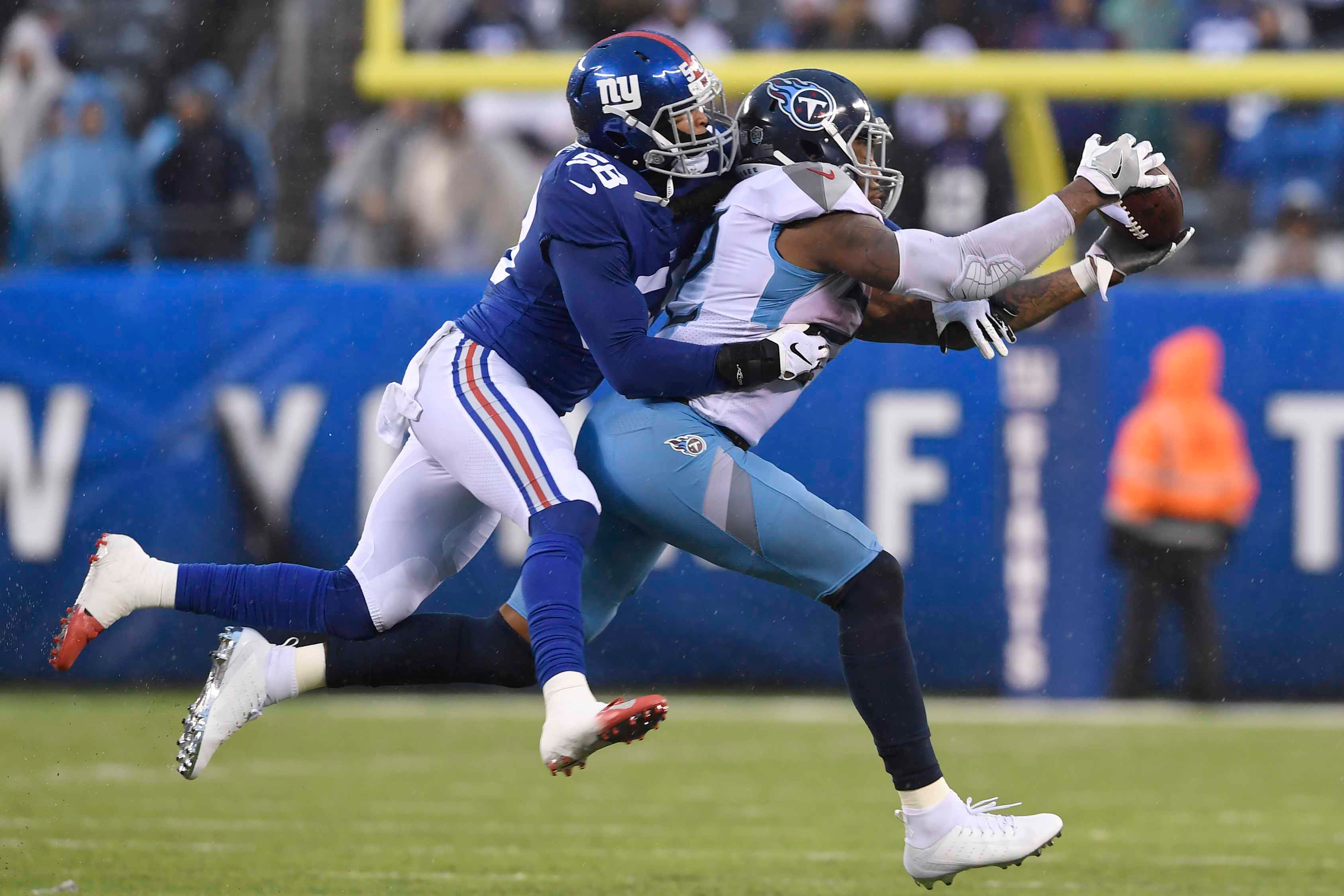 When Tae Davis was moved from safety to linebacker before his senior season at Tennessee-Chattanooga, he wasn’t sure it was a good idea.

“Even my freshman year, the coaches would tell me when it was all said and done I’d wind up as a linebacker,” Davis told The Post on Thursday. “I thought they were just messing with me. Then we had a coaching change, and those coaches said the same thing about how the game was changing and that me moving to linebacker would give me an opportunity to make it to the next level, so I did it.”

Davis is glad he did. The rookie could make his third start of the season Sunday when the Giants play the Colts at Lucas Oil Stadium. At the very least, he figures to see plenty of action if starting inside linebacker Alec Ogletree can’t play after suffering a concussion during last week’s game against the Titans.

“These games are important,” Davis said, “not just for me, but the whole team. We’re all out here competing. That’s why we play the game is to compete, no matter the circumstances.”

There has been plenty of disappointment and frustration during this long 5-9 season, but Davis is among the feel-good stories of 2018. After leading the Mocs in tackles his senior year, Davis was not selected during the 2018 NFL Draft but eventually signed a free-agent deal with the Giants. He came to camp a long shot to make the team, but at 6-foot-3, 215 pounds, he impressed the coaches with his physicality and agility and earned a spot on the 53-man roster. He continues to impress, having made 21 tackles in 12 games.

“One of the things that stuck out to me was he was a guy who could run around a little bit and hit,” Giants defensive coordinator James Bettcher said. “Such an important part of this league right now is to be able to tackle in space and be able to match and cover in space. Each week he’s learning to play as fast as his foot speed.”

Davis, a native of Oxford, Ala., received good advice from hometown friend Kwon Alexander, who was a fourth-round draft choice of the Buccaneers in 2015.

“I know he went through a similar thing back in high school being an undersized linebacker with a background as a safety,” Davis said. “I called him to pick his brain.”

Alexander, who made the Pro Bowl last season, didn’t talk X’s and O’s. He told Davis what really mattered.

“He told me that it was all about heart,” Davis said. “That if you have that dog mentality that no matter what position you play, you’re going to be successful. After we talked about that, I didn’t have too much more to ask him. I knew what I had to do.”

Davis was inactive the first two weeks of the season before making his NFL debut on special teams in the Giants’ first win at Houston. He saw his first action at linebacker in Atlanta, where he had a host of friends and family attendance.

“I was nervous at first,” he said, “but after the first play I settled in and started playing ball because at the end of the day, it’s just football.”

He made a season-high six tackles the following week against Washington and later enjoyed his first career start against the Bucs and old friend Alexander. Davis recorded five tackles in that game. In retrospect, his experience as a safety has served him well, giving him the kind of coverage skills many linebackers lack.

“The game has changed,” he said, verifying what his college coaches had predicted. “It’s turned into more of a matchup-type of league, so you not only have to play the run, but you have to be able to cover also. Having that safety background has helped me out a lot.”

When Davis signed with the Giants he tweeted: “Thankful for the opportunity @Giants. I promise you won’t regret it!!!”