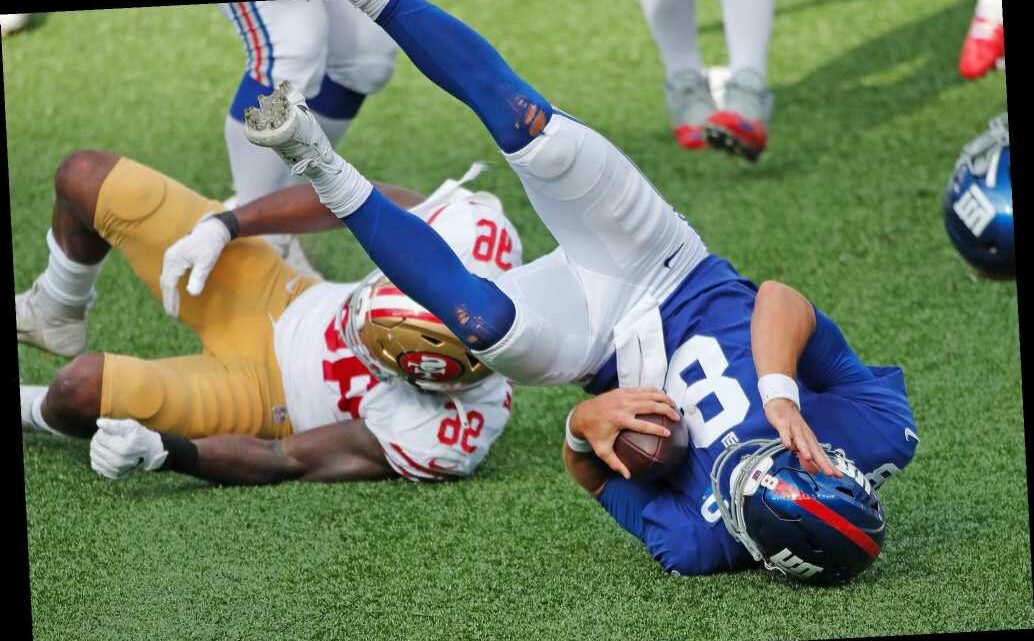 Grading the Giants after a 36-9 loss to the 49ers on Sunday:

Another dreadful start and never got any better. Two more turnovers for Daniel Jones (17 of 32, 179 yards) and more inaccuracy than we are accustomed to seeing. At least he ran well (5-49). Sloppy pitch by Jones couldn’t be handled by Evan Engram for an early turnover. Giants debut for Devonta Freeman (5-10) was a dud, but cannot pin any of this on him. Wayne Gallman (4-7) started at running back, for what it’s worth. Not one snap taken in the red zone by this group. That is big-time inept. The run-blocking is remarkably bad.

When these guys are on the field for a 16 seconds shy of 40 minutes it is not going to be attractive. Question: How do you make Nick Mullens (343 passing yards, 108.9 quarterback rating) look like a million bucks? Answer: Start him vs. the Giants. Niners were 8 of 12 on third-down conversions. Some gritty work early gave way to some play that rhymes with gritty after halftime. WR Brandon Aiyuk looked like a rookie of the year candidate. Rookie CB Darnay Holmes was targeted early and often and beaten early and often. Holmes’ illegal contact penalty on third-and-22 was a killer, keeping a touchdown drive alive. CB James Bradberry, playing at a Pro Bowl level, traveled with WR Kendrick Bourne (4-63).

Let’s hear it for Graham Gano, who hit field goals of 52, 42 and 47 yards for all the scoring for his team. Tentative first kickoff return by Corey Ballentine (who should have stayed in the end zone) was stopped at the 11-yard line. Time to find a different return man. Face-mask penalty by Lorenzo Carter on botched snap gave the 49ers another try for PAT and added another point to Giants deficit. Like tossing that deck chair off the Titanic. Riley Dixon had to wait until the fourth quarter for his first punt, and it was a 54-yard beauty down to the Niners 8-yard line.

Cannot argue with Joe Judge going for it on fourth-and-1 from his own 30 late in the third quarter, down by 14 points. What did he have to lose? QB sneak with Jones was a disaster, though. Good move by Judge to go for it on fourth down near midfield on first drive of third quarter. It is on Judge to get his team out of the gate faster than this and find a way to keep players believing. Defensive coordinator Patrick Graham made two lineup changes and additions of Logan Ryan (for Julian Love) and Isaac Yiadom (for Ballentine) were upgrades. Judge believes in using front-line players on special teams. The risk of this surfaced when starting strong safety Jabrill Peppers injured his ankle on the field-goal block unit in first quarter.