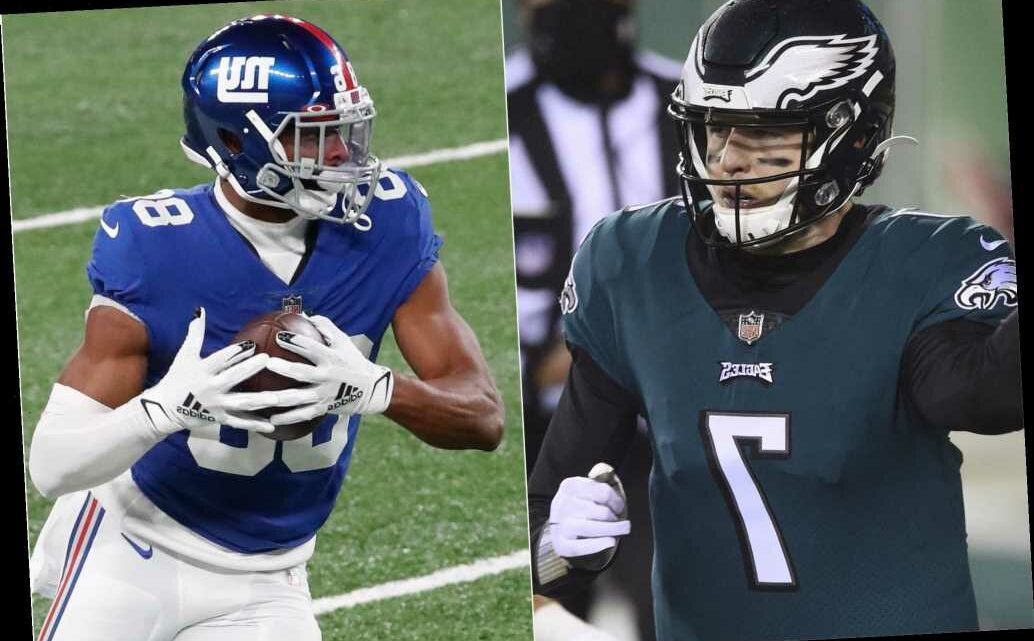 Giants get apology for play that nearly cost them

Eagles doing everything they can to endanger Giants’ playoff hopes

Philadelphia failed to deliver the knockout of the Washington Football Team the Giants needed to steal the NFC East title at 6-10, with coach Doug Pederson pulling rookie quarterback Jalen Hurts in the fourth quarter for little-used third stringer Nate Sudfeld in a season-ending 20-14 loss Sunday night at Lincoln Financial Field.

“Why on gods green earth is Jalen Hurts not in the game,” Giants receiver Darius Slayton tweeted after Hurts was pulled, before adding a few minutes later, “This is sickening.

“You play the game to win point blank period. JJ Watt said it best the other day outside of how it [affects] us. This [is] just disrespectful to the game.”

Other past and present Giants players complained on Twitter, as well, including Victor Cruz and Justin Tuck.

Carl Banks noted Pederson “owes the Giants nothing,” but wondered if the Eagles coach was “trying to get fired.”

“Can someone make it make sense to me what’s going on….?” injured running back Saquon Barkley wrote.

“This is why we don’t like the Eagles,” Eli Manning replied.

Washington’s tumultuous year — which continues next week with a home playoff game against Tom Brady and the Buccaneers — began with the removal of its longtime team nickname. The controversy continued last week when the organization released its 2019 first-round draft pick, quarterback Dwayne Haskins.

Carson Wentz, who was benched last month in favor of Hurts, also was inactive Sunday night after ESPN reported earlier in the day that he plans to ask for a trade this offseason because his relationship Pederson is “fractured beyond repair.”

Wentz was tied with Denver’s Drew Lock for the most interceptions in the league this season with 15. His four-year, $128 million contract extension (with a $34.7 million salary-cap hit) kicks in next season.

Hurts, the Eagles’ second-round pick out of Oklahoma, made his fourth consecutive start since replacing Wentz during a Dec. 6 loss to Green Bay.

Hurts scored two rushing touchdowns in the first half, although his first-quarter interception led to a Washington field goal. Smith also tossed two touchdown passes before halftime, including a 13-yarder to Thomas with 20 seconds remaining for a 17-14 lead.

Eagles safety Marcus Epps’ interception of Smith deep in Washington territory late in the third quarter appeared to set up at least a game-tying field goal try. Pederson decided to go for it on fourth-and-goal at the 4-yard line, however, and Hurts’ hurried pass into the end zone intended for Quez Watkins fell incomplete.

Sudfeld, a former Washington draft pick (2017), was intercepted on third down on his first offensive series to open the fourth quarter.

Smith was picked off by TJ Edwards on the ensuing series, but Sudfeld fumbled a shotgun snap two plays later and the ball was recovered by Chase Young to set up a Dustin Hopkins field goal. Sudfeld finished the quarter 5-for-12 for 31 yards with the two turnovers.

“I think the Eagles just hate us more than Washington,” Giants receiver Golden Tate tweeted after Hurts was removed from the game. “That’s [the] only thing that could make sense, right?”