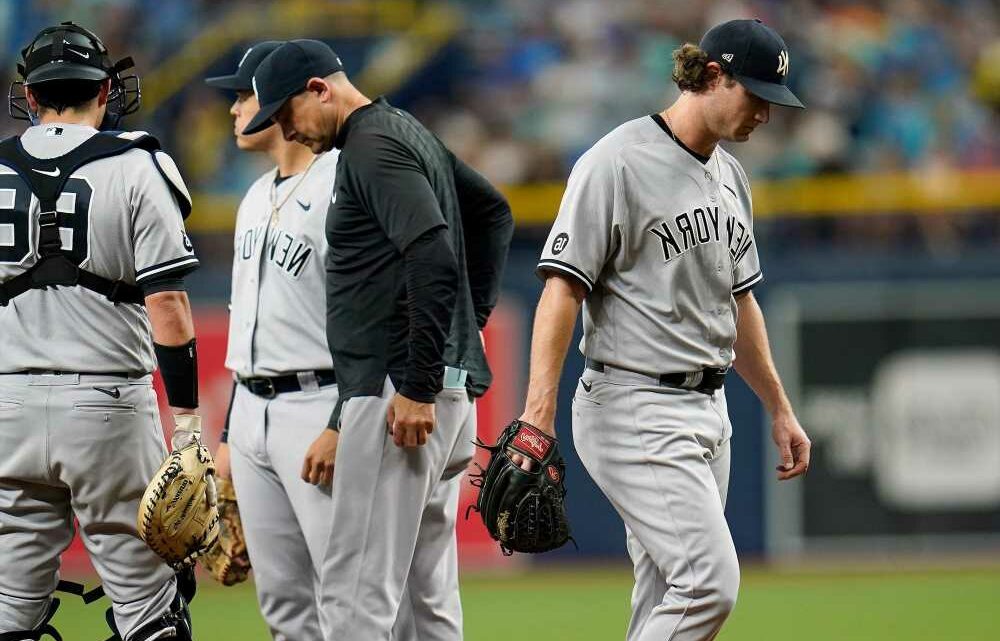 Yankees’ big trade was supposed to include another player

ST. PETERSBURG, Fla. — As the Yankees look to remake their roster prior to Friday’s trade deadline, their current team on Thursday played its worst game of the year — and their ace stunk.

Looking to complete a series sweep of the Rays on the same day they completed a trade for slugger Joey Gallo, the Yankees saw Gerrit Cole get pounded in a 14-0 loss at Tropicana Field.

In a sign of things to come, Brandon Lowe hit Cole’s pitch of the day into the stands in right. Initially called a home run, the umpires reversed themselves and ruled it foul and ended up reviewing the play, which confirmed it was a foul ball.

Lowe reached on an infield hit and Ji-Man Choi followed with a walk. A Yandy Diaz single to center drove in Lowe for the Rays’ first run.

Austin Meadows then drilled a three-run shot to right-center to make it 4-0.

After giving up four runs without recording an out, Cole got the next three batters to end the 26-pitch inning.

Cole settled down and allowed just one hit over the next four innings, but unravelled again in the sixth.

The Rays loaded the bases with one out with singles by Meadows and Randy Arozarena and a walk to Wander Franco.

Following a visit from pitching coach Matt Blake, Kevin Kiermaier hit a fly ball to deep left. Brett Gardner caught up to it, but dropped the ball.

Two runs scored on the play, which was ruled a sacrifice fly and an error by Gardner.

Cole was replaced by Albert Abreu and Abreu promptly walked Mike Zunino before Brett Phillips put the game away with a grand slam in the 10-run inning.

The Yankees’ offense, meanwhile, was shut down by right-hander Luis Patino, who allowed just hits in six scoreless innings.

The bigger worry remains Cole, who has a 5.35 ERA in his last six starts (20 earned runs and six homers in 33 ⅔ innings). He followed up a subpar outing in Boston (three runs in five innings) with an even worse performance against the Yankees’ other AL East rivals.

And it’s the second consecutive appearance Cole’s pitched poorly versus Tampa Bay. In his previous game against the Rays, he allowed five runs in five innings. He’s also 1-3 with a 5.11 ERA facing the Rays this season.