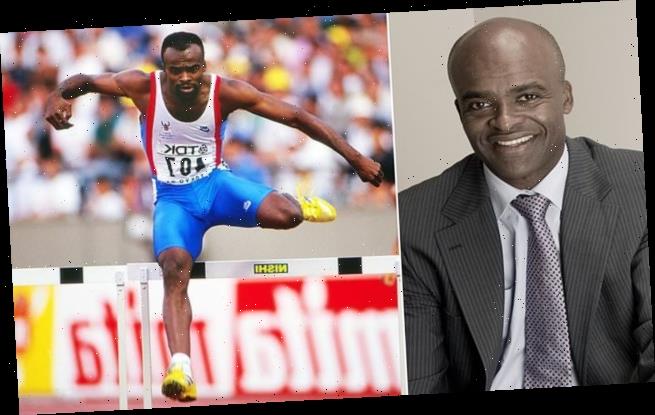 ‘I realised I might kick the bucket’: GB track legend Kriss Akabusi reveals the uncomfortable details of his colon cancer scare

Kriss Akabusi has never been accused of lacking an appetite for life, yet it was only through grim recent experience that he truly appreciated what he might be losing.

That was the natural conclusion of the discovery late in 2018 that he had growths in his bowel and the fear he then held of dying from cancer.

As he put it to Sportsmail: ‘I realised I might actually kick the bucket…’ 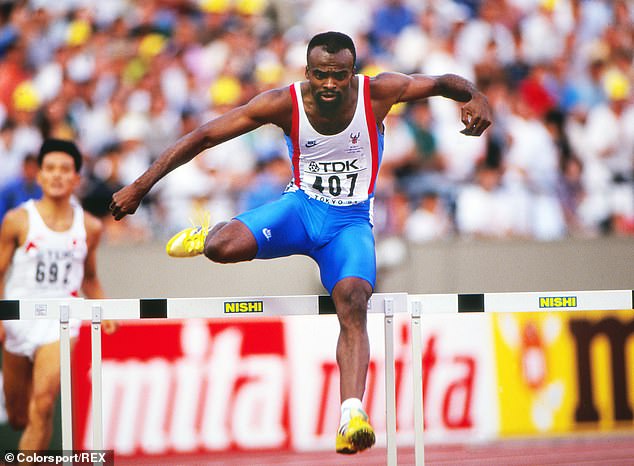 The 61-year-old’s decision to reveal the private and uncomfortable details of that scare are part of a wish for others to stop ignoring symptoms of bowel cancer, the fourth most common in the UK and the second biggest killer.

‘It isn’t pretty and it isn’t something people want to talk about,’ he says, having had the all-clear after surgery in the winter of 2018. ‘People knowing about it can save them. I say that as someone who wanted to ignore it.

‘I am a man of my generation and we tend to keep things to ourselves. So when I started bleeding from my backside when I went to the toilet, I thought it would just sort itself out. But it went on a while.’

That meant ignoring the issue through the majority of 2017 and finally telling a friend in the autumn of 2018. 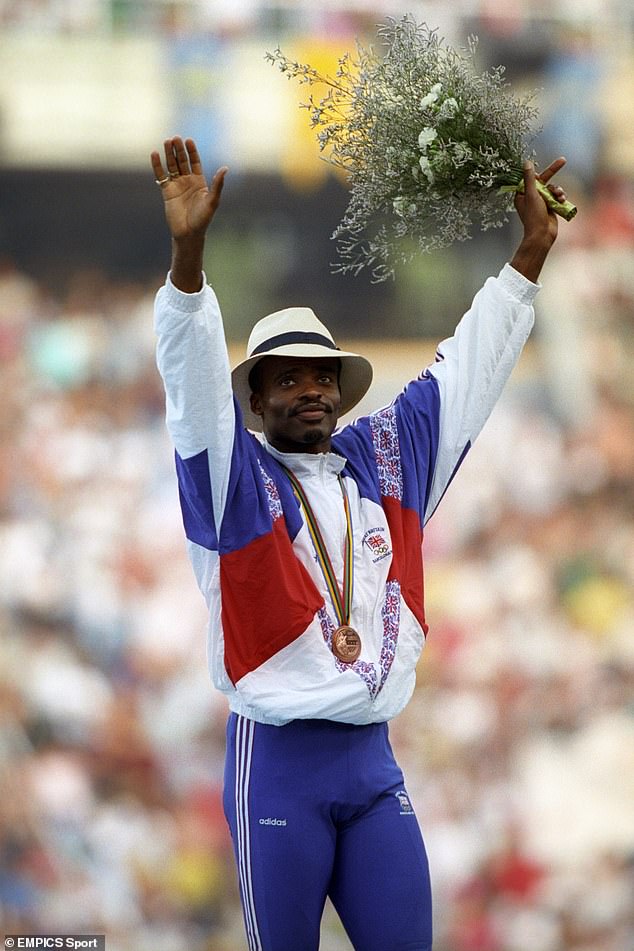 ‘The doctor did the test and sent me for the colonoscopy and saw a couple of polyps (pre-cancerous growths).

‘They were quite easy to remove but there was one that had degraded and he wasn’t happy about it. I went to a specialist and there was a high risk of cancer, so I was booked in for an operation. I went in, had a third of my colon cut out, and had three weeks to wait on the result.

‘The wait was horrible. You think about your mortality, kicking the bucket and what would have happened if my friend hadn’t got me to go to the doctor.

‘People in their 50s and 60s ignore these symptoms, the blood, and they mustn’t. Apparently, only a third of men who know it is a symptom would go to their doctor. 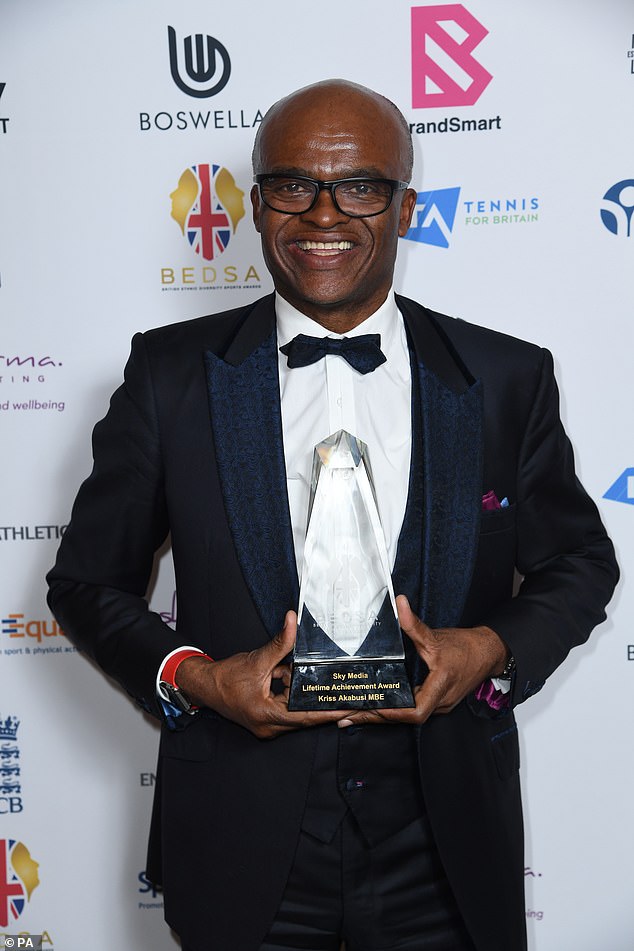 ‘But you need to get past that. I could have another 20 years if I take care of myself or five if I don’t. I don’t want to be seen as hard and tough if it costs me 15 years of my life. Thankfully, I was one of the fortunate ones — it was all inside the bowel, it hadn’t spread elsewhere, and the results showed it wasn’t yet cancerous.

‘I got away with it. But I am now far more diligent about this.’

Akabusi is using his experience to front the Stay on Track campaign, which has launched on Wednesday to raise awareness of bowel cancer.

It is a shift in tone from the image of the laughing star of British athletics in the 1980s and 1990s, and countless television shows since.

He won three Olympic medals back in the day, and was among the most famous sportsmen in the country when he overtook world champion Antonio Pettigrew on the last leg of the 4x400m relay at the World Championships in Tokyo in 1991.

‘It’s funny, people still talk about it, especially when I am out running,’ he says. 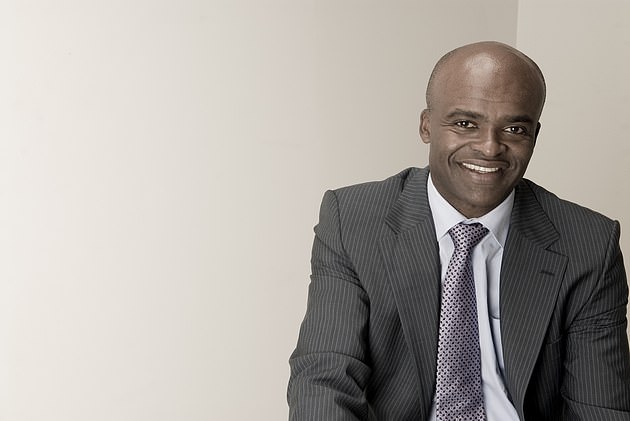 ‘I run three to six miles every day, but not a sprint — more like an Ali shuffle. People overtake me and say, ‘Hey, you’re Kriss Akabusi’, and I’m like, ‘I used to be’, and carry on at my slower pace.’

Akabusi has no great links to athletics these days. ‘I never wanted to be one of those old guys at the track saying what it was like in my day,’ he says. ‘Besides, no one asked me to stick around and be a mentor or anything.’

He does retain an interest in the sport and holds the contrary view that the International Olympic Committee should not give in to pressure to allow political demonstrations at the Games.

While debate surrounds the right of athletes to take a knee, Akabusi is mindful of other protests that might follow if the IOC’s rule 50 is altered.

He says: ‘It would be obvious to say get rid of it but I am not sure. We have had, in the last 100 years, some very ugly political slogans people could have made.’

Stay on Track, a new campaign in partnership with Norgine and Bowel Cancer UK, aims to raise awareness of bowel cancer. Visit: bowelcanceruk.org.uk

Neil Patrick Harris Reveals He and His Family Had Coronavirus Earlier This Year: 'I Thought I Had the Flu'