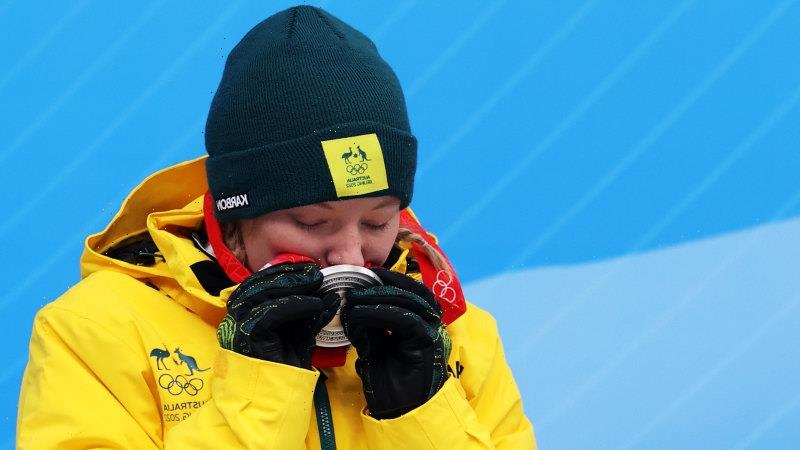 From devastating concussion to Olympic glory: Narracott’s journey to silver

Beijing: When Jackie Narracott was a kid, she always went down the waterslide head first. Ambitious, bold and competitive, Narracott had wanted to be an Olympian since she could run.

It was in the family. Her uncle, Paul Narracott, had gone to two Games, Los Angeles in 1984 and Albertville in 1992. When Jackie Narracott realised she was not quite fast enough on an athletics track, she switched to one on ice. 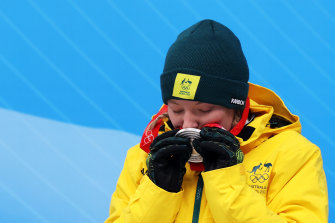 Now she flies down an ice slide head first, faster than all but one person in the world. On Sunday, just after 1am AEDT, the girl from Brackenridge, Queensland, became an Olympic skeleton silver medallist.

The 31-year-old is a one-woman phenomenon in a sport that has no facilities in Australia. On Sunday, after 10 years of persevering through isolation and concussion, Narracott broke Europe and North America’s stranglehold on an event that sends athletes down a two-kilometre ice plunge at almost 130 kilometres an hour.

Never before has there been an Olympic women’s skeleton medallist outside Europe or North America. In winning, she delivered the Australian team its best overall Winter Games result ever – four medals, with a week still to go in Beijing, one of the most restrictive and challenging Games in recent memory. Her compatriot Bree Walker has the chance to topple sliding stereotypes again on Monday after she qualified seventh for the final two heats of the bobsled. 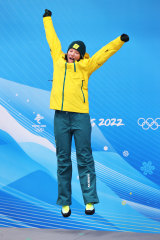 Narracott jumps for joy on the podium.Credit:Getty Images

Narracott did it through perseverance and consistency over four runs across two days on the “snow dragon” track in Yanqing, 100 kilometres outside Beijing. Heading into the final two runs she was on track to win gold. In the end she was beaten by just 0.61 of a second combined across four runs by Germany’s Hannah Neise.

“I knew that I didn’t have to do anything special. The whole aim would last two days to stay consistent,” said Narracott. “I was just staying calm and doing what I’ve done in the previous three runs. We knew that it was going to probably add up and that pretty much proved to be the case.”

Asked on Sunday if he could have ever imagined sitting next to an Australian Olympic sliding medallist, Australian chef de mission Geoff Lipshut was blunt. “Probably not,” he said. “We tried to get the results in 2006 and it didn’t happen.”

Lipshut is the first to acknowledge that Narracott’s medal is not because of some massive investment, team infrastructure or an army of coaches watching Narracott’s every move. No, part of Narracott’s medal actually belongs to a love story, between her and her husband Dom Parsons – a bronze medallist in skeleton for Britain in 2018 – who became Narracott’s coach and helped her go one better than him four years later.

“To be honest, I think I’ve been more of a coach than a husband for the last couple of weeks and I’ve been looking forward to getting back to being a husband again,” said Parsons. 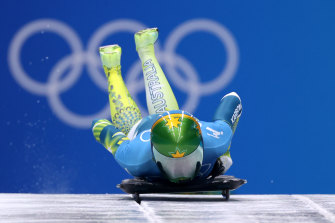 “I’m so proud of how she’s carried herself. Her determination and motivation has just been so impressive. She’s been dreaming of this since she was a kid, it is so great to see her finally achieve it.”

Narracott’s journey has not been an easy one. A lack of funding and COVID-19 restrictions have all taken their toll. Skeleton, named after the thin slide that riders go down on, is so fierce and the g-forces so great on the athletes that they can only do two or three runs a day down a track that is mentally and physically exhausting.

Some skeleton riders visualise every detail of a track before they hurl themselves down it. The turns, the bends, the lines they have to run to give themselves every advantage in a sport that the difference between first and 10th comes down to fractions of a second.

Narracott is different; she relies on feel – how the grain of the ice moves underneath and around her – to make decisions about how to twitch her shoulder, legs and head ever so slightly to take her down a track harder and faster than her competitors.

So in 2019, a concussion so bad that it took her six months to recover was devastating for her Olympic dreams.

“I finally realised that after Christmas that year that I was really slow to respond to questions. I was super emotional and then St Moritz, which is the best track in the world, was making me dizzy and that shouldn’t happen to you,” she said.

After half a year of rehabilitation she was back on the ice. Moving between training centres in Britain and Korea, COVID-19 restricted the number of competitions she could compete in.

When she landed back at St Moritz in January she stunned the field by taking out Australia’s first gold at a world cup.

Narracott also made an important mental change during that time. After years of heaping pressure on herself to achieve beyond what the financial, emotional and infrastructure hurdles would allow, she learned to let go.

“I finally let go of the Olympic medal. I realised my career would be a lot better If I did,” she said. “I tried not to think too far ahead and just to stay content doing what I was trying to do.”

A week after letting go, she won silver. Narracott, the Brisbane sprinter who took her dreams across the world, had arrived at her final destination

“My gosh, this is what it is supposed to be like,” she said.