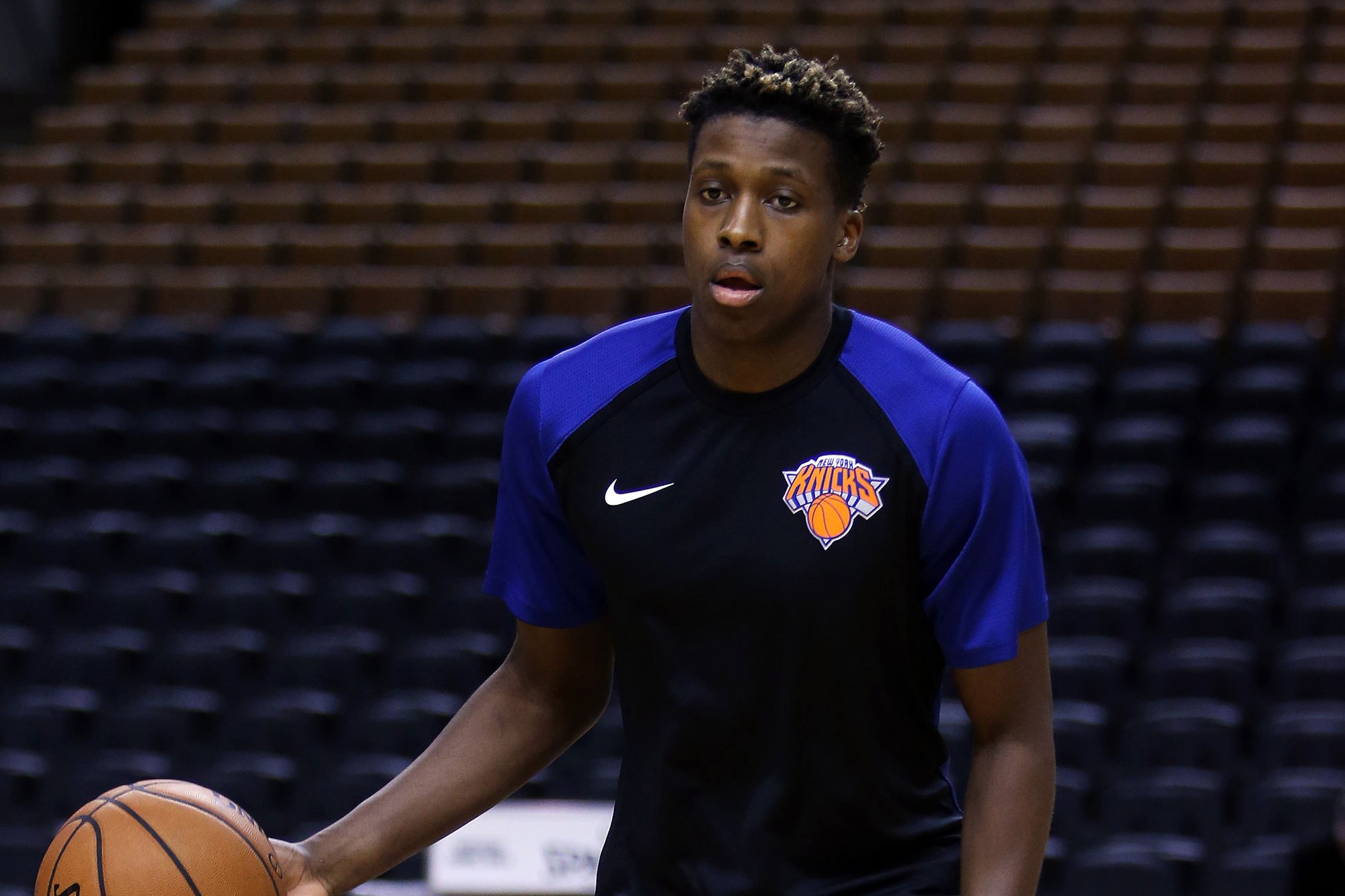 BOSTON — Frank Ntilikina was the last one off the court at Knicks practice Wednesday in Tarrytown, NY, but wasn’t in his usual chill mood. When asked how he was holding up during these uncertain times, Ntilikina went back at the questioner.

“Of course, I got to do what I got to do,” he said. “Put in the work and stay positive and cheer my teammates.”

It wasn’t the first time during a brief but bristling interview that he threw the question back. When asked if he knew whether he’ll play versus Boston on Thursday, Ntilikina said, “What did coach say?”

“Then possibly,” the 20-year-old Frenchman responded.

During an up-and-down rookie year, Ntilikina, the Knicks’ eighth pick in 2017, had never experienced this — two consecutive games in which he did not play. His stunning demotion followed two straight scoreless games to cap a stretch of 11 straight in which he didn’t reach double figures. Suddenly, his defensive prowess wasn’t enough to overcome being a zero on the offensive end.

No, coach David Fizdale would not guarantee Ntilikina, 20, will be back in the rotation when the Knicks face the Celtics (13-10), who boast two point guards Knicks general manager Scott Perry might love to have — free-agent-to-be Kyrie Irving and potential trade candidate Terry Rozier. (TNT analyst Grant Hill, who will call the game, told The Post he expects the Celtics to make changes next month if their season doesn’t improve.)

Then came this ominous line from Fizdale, making it seem the former lottery pick Ntilikina, in the second year of a four-year rookie contract, is not assured of anything for the long-term future.

“I got a front office that supports me in that,” Fizdale said regarding his tough lineup decisions in reference to Ntilikina. “We have to know who’s moving forward out of this group. And it won’t be every single player on this roster, unfortunately. That’s the nature of the business. We have to come out of this year knowing who those guys it’s going to be moving forward with us.”

The shocking part of Ntilikina’s failure to get on the court against Milwaukee and Washington was that backup point guard Trey Burke sprained his knee against the Bucks and was out against the Wizards. Fizdale used Allonzo Trier as backup point guard. Instead of floating Ntilikina in at the wing, Fizdale has gone with the hot hand of Damyean Dotson and gave veteran Courtney Lee his first minutes of the season.

Fizdale said he wants to continue spotting in Lee, who played 15 minutes against Washington.

“I don’t know if it’s a learning lesson,” Fizdale said of Ntilikina’s demotion. “I want him to keep working hard and working on the things we talk about so when his time comes again, he’s ready to go.”

Asked what those things are, Fizdale said, “Basic fundamentals. Shooting, our defense, spacing on the floor, execution. He’s working his tail off at that. Right now Dot’s playing out of his mind, and it’s the fair thing to do right now.

“But I won’t hesitate to put in Frank. He’s an NBA player who can help us. You don’t know game to game. I just want him to be ready when he gets that chance again.”

ESPN reported the Suns reached out to the Knicks at the beginning of the season about Ntilikina, but the Knicks were uninterested. But it’s known Perry — who did not draft Ntilikina — added current starter Emmanuel Mudiay and Burke to the roster last season out of concern for Ntilikina’s creative offensive potential at point guard.

Wednesday, Ntilikina stayed on the court after practice to hoist — and sink — dozens of 3-point shots from all areas. He’s shooting 31.8 percent from 3-point land (36 percent overall). The last time he played — Nov. 28 in Philly — he wasn’t coming close.

“Just keep on working, keep on trusting what I do every day,” Ntilikina said. “Keep on trusting my work will pay [off]. Coach’s decision not to put me on the court but we’re working at this together. I’ll be ready for the moment when he calls me back.”

Fizdale has repeatedly pointed to Dotson and Burke falling out of the rotation before reemerging without missing a beat as an example for Ntilikina to follow.

“I see that they responded well when they got back on the court with the right mindset,” Ntilikina said. “The mindset is to be ready when the coach gets back to me.”

Fizdale said he won’t “hesitate” to use Ntilikina on Thursday — which is different than saying he’s part of the rotation.

“He’s like right there,” Fizdale said. “I’ve always got him right there ready to use him. He’s ain’t out of the loop yet.”

Jennifer Garner Is All Smiles on a Shopping Trip in Brentwood