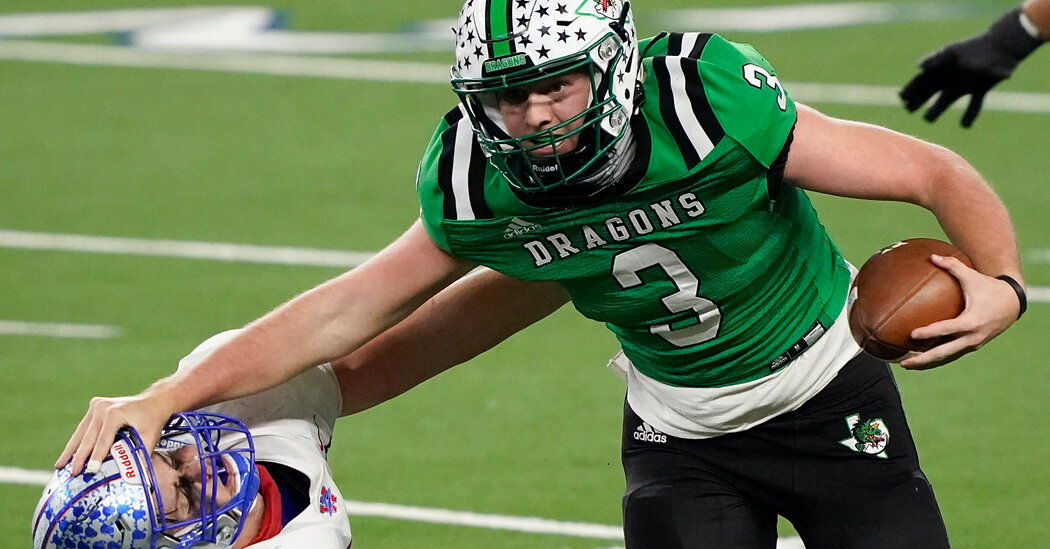 Quarterback Quinn Ewers of Southlake, Texas, was expected to lead his city’s storied high school team this fall in its quest for another state championship as the nation’s top football prospect.

Instead, on Aug. 2, Ewers announced that he would graduate early, skip his senior season at Carroll High School and enroll at Ohio State to pursue the starting quarterback job there and potentially hundreds of thousands of dollars in endorsement deals that N.C.A.A. athletes are now free to negotiate.

Ewers, 18, said on Twitter that he was motivated, in part, by frustration over a new Texas law that prevents high school athletes from signing similar agreements.

Another high school athlete, Mikey Williams, a 17-year-old basketball star in North Carolina with more than three million followers on Instagram, signed in July with a management and marketing company to secure endorsement deals. He plans to play this season for an independent team that is not bound by rules governing high school sports in North Carolina. Excel Sports Management, which represents Williams, told ESPN that it expects the business arrangement will earn millions of dollars for the teenager, who is not eligible for the N.B.A. draft until 2024.

Just as colleges have begun wrestling with these issues in recent weeks, so have high schools, where some top players have social media numbers as impressive as their athletic statistics.

Some worry that high school sports, and the unique pride and identity they provide to places like Southlake, will not be the same as big money influences top athletes.

“There’s almost a romance about traditional high school sports,” said Karissa Niehoff, the executive director of the National Federation of State High School Associations. She fears that endorsement deals for prep athletes means “the last bastion of amateurism will be gone.”

But, in truth, many have been questioning the strictures of amateurism for decades. And the hoary notion of what high school sports should be — homegrown stars playing before bright lights, cheerleaders and marching bands for nothing more than a love of school and community — is evolving further as teenage athletes are also being recruited as pitchmen.

In general, high school athletes are not permitted to sign endorsement deals connected to their high school teams. But there appears to be leeway in some states for athletes to be paid for signing autographs or holding camps in private. And rules can vary by school, depending on whether they are affiliated with a state high school athletic association.

In Texas, one of three states that specifically prohibit high school athletes from signing endorsement deals, state lawmakers have already signaled a willingness to revisit a ban that went into effect on July 1, given the unintended consequence of a star athlete like Ewers skipping his senior year.

All states will likely reassess their rules, experts say, in light of what Robert Zayas, the executive director of the New York State Public High School Athletic Association, describes as increasing difficulty of differentiating “between a student capitalizing on their athletic fame and being a social media influencer.”

A proposed revision by the New York state association, similar to a California rule, would allow high school athletes to profit off their name, image and likeness as long as it was not done in association with a school, team, uniform or logo.

The customary notions of amateurism have become dated. The Olympics dropped their ban on professionals in the late 1980s. The gold medalist in women’s street skateboarding at the recently concluded Tokyo Games, 13-year-old Momiji Nishiya of Japan, lists more than a half dozen corporate sponsors on her Instagram account.

Ewers and Williams are not the first high-school athletes to grow impatient with the restrictions of amateurism in America.

Olivia Moultrie, a teenage soccer phenom from Portland, Ore., received a scholarship offer from North Carolina at age 11 but instead turned pro, signing an endorsement contract with Nike at 13. In July, at 15, she became the youngest player ever in the National Women’s Soccer League after a successful antitrust challenge to the league’s minimum age requirement of 18.

“I have no problem with this impatience,” said Anson Dorrance, who has coached North Carolina to 22 N.C.A.A. women’s soccer titles. “I support these kids who want to use their name, image and likeness to generate income. Who are we to prevent them from doing it? They are monetizing their passion.”

The United States is one of the few countries where youth athletics are mostly organized by schools instead of sports clubs. Some administrators, coaches and officials have expressed concerns that star athletes like Ewers and Williams could be riding the crest of a wave that might swamp the customs and norms of school-sponsored sports.

Joe Martin, the executive director of the Texas High School Coaches Association, said that several problems could develop if some players had endorsement contracts: Tension and jealousy in the locker room that undermine team spirit and cohesiveness. Escalated abuse of transfer rules as powerhouse high schools recruit players on the promise that they can better build their brands with enhanced visibility. Awkward situations where some high school players make more money than their coaches.

“The Ewers kid at Southlake is making more than the whole coaching staff, period; think about that,” Martin said. “That’s something we’ve never had to address before as coaches.”

Still, high school football and basketball at the top levels have long become big business. Even the idea of a school team has undergone a radical metamorphosis in some cases. Williams plans to play basketball this season for newly-formed Vertical Academy, based in Charlotte, N.C., and founded by his father. It will play a national schedule and plans to be sponsored by a shoe company. Vertical Academy is an independent team, not a school; Williams will take classes online or in person at a Christian school he previously attended, Mahlon Williams, his father, told The Charlotte Observer.

Recruiting is commonplace, legally and furtively, in high school football and basketball. IMG Academy in Florida draws athletes from around the country and internationally. Games are regularly shown on national television and camps and tournaments for elite players are sponsored by shoe companies. Top players receive college scholarship offers as early as eighth grade.

Carroll High School in Southlake, outside Dallas, plays football in a $15 million stadium. (Another Dallas-area power, Allen High School, plays in a $60 million stadium.) Ewers’s star power, now unavailable to his high school team, helped Carroll get booked to play its season opener on Aug. 26 on ESPNU at AT&T Stadium, home of the Dallas Cowboys.

Ewers would have preferred to remain at Carroll High if he had been able to benefit from economic opportunities there, he and his parents told Pete Thamel of Yahoo Sports, who first reported the quarterback’s intention to leave for Ohio State.

“We don’t need the money,” Curtis Ewers, Quinn’s father and an oil and gas executive, told Yahoo Sports. “It’s just the principle of it.”

Quinn Ewers and his family did not respond to requests from The Times for comment. On Monday, before leaving for Ohio State, he announced his first endorsement deal, with a Dallas-based beverage company called Holy Kombucha. It is aligned with a school-based suicide prevention program called Hope Squad.

A 45-second video of Ewers showed him spinning a football on his finger and mimicking a snap from center with a can of fermented tea. By Thursday, the video had more than 600,000 views. The company declined to give details about the endorsement, except to say that it was for at least a year. A person familiar with the deal said it would pay Ewers six figures, a number sure to draw as much attention as his high school stats of 73 touchdown passes, 6,445 yards and only eight interceptions in two varsity seasons.

“We could have chosen any other athlete, with a bigger name,” Theresa Pham, a co-founder and the chief operating officer of Holy Kombucha, said. But given Ewers’s youth, visibility and influence on social media — he has more than 123,000 combined followers on Instagram and Twitter — his ability to bring awareness to suicide prevention and to the company’s drinks made his endorsement “a perfect partnership.”

In July, Williams, a 6-foot-2 guard rated as the No. 7 prospect among ESPN’s top 100 players for the Class of 2023, became the first high school basketball player to sign a deal to monetize his name, image and likeness.

A native of San Diego, Williams scored 77 points in a game as a freshman at San Ysidro High School. He is a deft shooter and a thunderous dunker. But perhaps most impressive is the carefully cultivated brand he has developed on social media. Reportedly, Williams is so popular that he needed a police escort at a recent A.A.U. tournament.

“He’s an anomaly in the situation of someone that’s a high school phenom,” said Matt Davis, the vice president of Excel Sports Management, which plans to roll out global brand partnerships in the next several months. “He’s a content creator. He’s an exceptional basketball player. He’s had a large following for over a few years.”

For most high school athletes, though, monetizing their name, image and likeness will amount to a “couple hundred bucks a month” by using their digital media skills, said Blake Lawrence, the co-founder and chief executive of Opendorse, a technology company that helps athletes generate endorsement opportunities.

“These aren’t your granddaddy’s endorsements” of appearing on billboards or making public appearances, Lawrence said. “This is a sophomore in high school who is streaming on Twitch and getting tens of thousands of viewers to tune in live. What’s to stop him from giving a shout out to Subway or a local hospital?”

A sense of amateurism can be maintained as long as high schools themselves are not paying athletes to play, Lawrence said. For fans who attend football and basketball games on Friday nights, he said, “To know that a kid is making a dollar or two on YouTube or got paid for an autograph, that’s not going to change the way they cheer.”

In fact, Lawrence said, “If a school does it right, they’re going to celebrate their athletes being marketable and they might see more fans in the stands.”

Jamie Spears is 'willing to step down' as Britney's conservator, but not yet. So what happens next?
World News