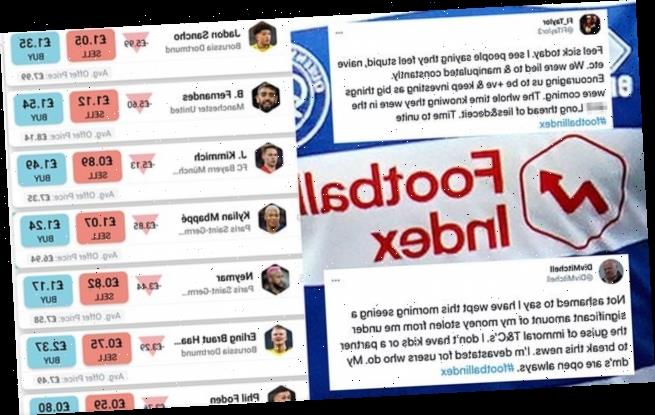 Thousands of fans left furious after share prices on virtual gambling platform Football Index CRASHED, leaving footballers worth just pennies with many claiming they’ve lost ‘life-altering’ amounts of money after being ‘lied to and manipulated constantly’

A number of users on Football Index, a virtual gambling platform, have lost ‘life-altering’ amounts of money, ranging in the thousands, after jaw-dropping share price crashes on the site, Sportsmail has been told.

The self-styled ‘real money virtual stock market’ announced that users would be given 28 days’ notice of a large reduction in dividend payments – with the majority of shares available in the world’s top players rapidly plummeting this weekend.

Sportsmail has heard accounts from several customers, who claim they have been ‘robbed’ of as much as £60,000, and said that the experience has ‘destroyed’ their lives, leaving them worrying for their family’s future.

Virtual gambling platform Football Index, a shirt sponsor for two Championship clubs – including QPR, has been met with a furious backlash after jaw-dropping share price crashes

Football Index insisted the decision to drastically slash payouts was made after consultations with legal and financial advisors, ‘in order to ensure the long-term sustainability of the platform’.

It was reported in January that the site had again suffered from a series of price crashes – although the latest, believed to be the most significant so far, has left a large number of users disgusted and insisting their money is ‘trapped’ in the system.

Essentially, investors are able to buy and sell ‘shares’ in footballers across the globe, and they will receive ‘dividends’ depending on their performances over the course of a three-year contract. 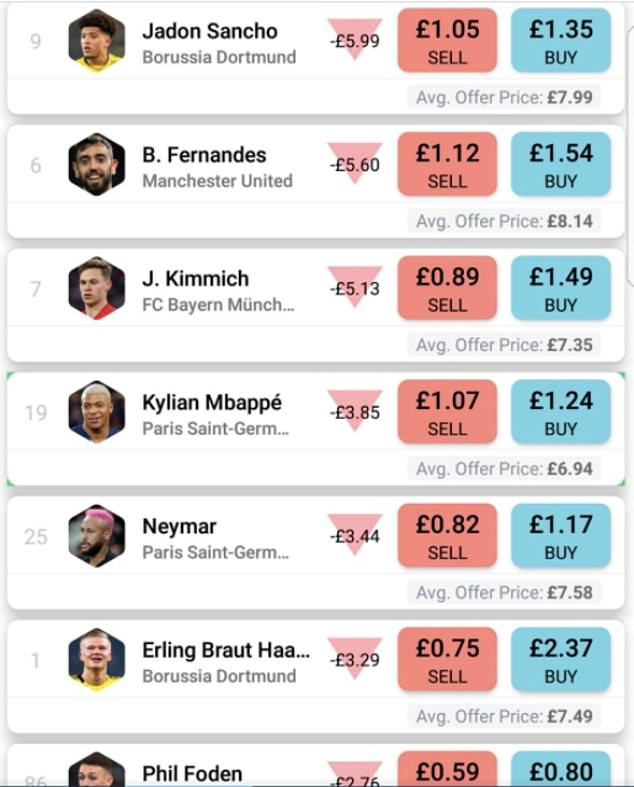 The maximum dividend a user could win on a single day was 33p, with the maximum under the new structure now just 6p in comparison.

The concept of placing bets on the showings of players, labelled as ‘buying shares’, has, unsurprisingly, proven immensely popular.

A matchday chart will rank the players, and the best performers will earn their owners a dividend. Football Index said that it paid out £11million last season.

The ability to trade in shares was temporarily suspended before the company’s announcement, with the market then re-opening on Saturday morning.

It has been reported that the price at which the majority of shares in the top 200 players on the platform can be sold nosedived to 1p or 2p. For many others, there wasn’t a sell price available at all. 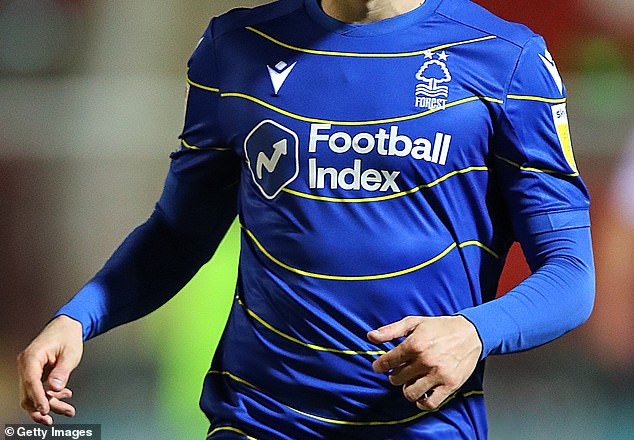 The gap between the buy and sell price of shares was notably large, making it effectively impossible for investors to make any money from the platform.

This morning, the share prices of footballers remained incredibly low.

The platform recognised the ‘frustration and disappointment’ from its customers in a statement released this weekend.

‘Over recent months, Football Index has sustained substantial losses,’ they said. ‘The Board agreed a recovery plan aimed at stemming these losses whilst retaining the dividend payments at current levels.’

The company went on to explain, however, that it became apparent the ‘ongoing payment of dividends at those levels’ was not able to be sustained.

An email sent to shareholders last Thursday from Adam Cole, founder of Football Index, and seen by Sportsmail, confirmed that the company has suffered ‘significant losses’ this year.

Mr Cole also revealed that work was underway to ‘stimulate liquidity and restart the market’. He added this was ‘sorely needed’.

Despite the apparent trouble, Football Index users were recently told in a statement that the company had, in its five-year history, ‘never been in a stronger financial position than today’.

After the crash, Sportsmail was contacted by a large number of customers, many of whom share similar experiences of losing large sums of money on the platform.

One person, who chose to remain anonymous, said that their first year on Football Index resulted in a £30,000 profit – before they then invested ‘pretty much everything’ they had.

On Friday, before the announcement, they were £3,000 down on their deposits – but are now estimating to be around £60,000 down instead. They have deleted the app.

‘I’ve always saved money since a very early age,’ they added. ‘Now I’m 27, and everything I’ve saved is now pretty much gone.’

‘My money is still in there, but it’s at zero basically.’

Sportsmail was told by one user that their portfolio last September was worth £16,000. After the share prices fell, it is now lying at a benchmark value of -£900.

The announcement of an impromptu Q&A session from CEO Mike Bohan has come under particular criticism.

A fortnight ago, Mr Bohan revealed that several key queries facing Football Index would be addressed the following week.

Another customer has told of how ‘excitement grew’ among traders, particularly on Twitter, with some ‘depositing significantly’.

The company have been accused of deliberately delaying holding the Q&A, having seen the market continue to grow.

‘The Q&A wasn’t a Q&A at all,’ the customer claimed. ‘It was an announcement that dividends were being reduced.’

In a statement to the Guardian, Football Index have refuted the accusation.

A spokesperson said: ‘When the Q&A was announced, the senior management team hoped we were in a position to continue with dividends at the current level until the end of the season. When it became apparent that this may not be the case, we postponed the full Q&A with the express purpose of not misleading customers while an appropriate route forward could be agreed with our external advisors.

‘As soon as the board had agreed a revised plan, on Friday 5 March, we published an extensive written statement addressing the most pressing concerns raised by our customers’.

There is particular anger that the betting firm continued to ‘mint’ and issue new shares in top footballers in the days leading up to the announcement that dividends would be reduced, Sportsmail has discovered.

On social media, a countless number of other users have also expressed their disgust at the situation.

‘I’m not afraid to say it, I feel absolutely drained… the lowest I’ve felt in a long time,’ one person said. ‘To think that I, and many others, have invested hard eared money into this platform to be cheated by these scumbags is just unthinkable.’ 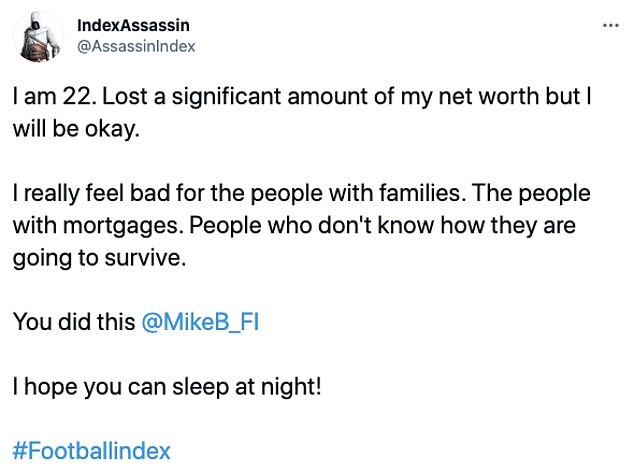 ‘Not ashamed to say I have wept this morning seeing a significant amount of my money stolen from me under the guise of immoral T&C’s,’ another wrote. ‘I don’t have kids or a partner to break this news. I’m devastated for users who do.’

A third said: ‘I am 22. Lost a significant amount of my net worth but I will be okay. I really feel bad for the people with families. The people with mortgages. People who don’t know how they are going to survive.’

They then sarcastically added that they hope Mr Bohan can ‘sleep at night’.

Football Index claimed it had 100,000 users two years ago – and is the main jersey sponsor for Championship clubs Queens Park Rangers and Nottingham Forest.

The platform was told in 2019 to stop advertising its services as an opportunity to invest rather than a form of gambling by the UK’s advertising watchdog.

It was also revealed in July of the same year that NASDAQ agreed to provide Football Index with an in-depth, cloud-optimised trading engine. This has now been placed on pause, though, after the revelations from Friday’s statement.

A Football Index spokesperson told Sportsmail: ‘We are aware that the Dividend Announcement on Friday has caused frustration and disappointment for many of our customers. 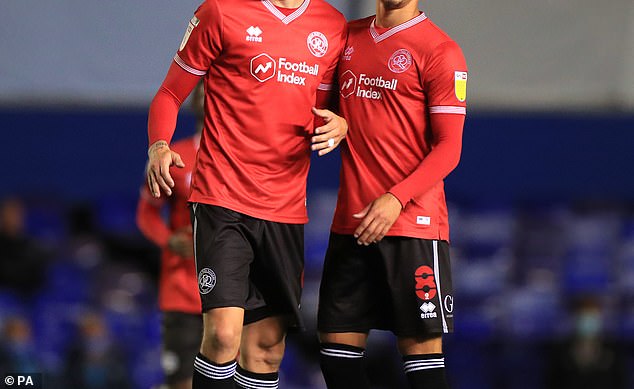 ‘While we take the concerns of our customers very seriously, we want to stress that our decisions have been guided by a desire to help customers achieve the best outcomes and receive the best possible returns, while also having the long-term sustainability of the business front-of-mind. Every decision that we make with regards to introducing new features to the platform is made with the express goal of providing a sustainable level of growth in terms of customers and the value of bets made in that period.

‘We see our business plan as a sustainable one for growth and, eventually, for improved returns to customers, as soon as this becomes viable once more. As we have previously outlined to our customers, yields had become unsustainably high compared to the level of activity on the platform, which has made this decision an unfortunate but necessary one.

‘We would urge anybody concerned about the bets that they have made to get in touch with our Customer Service team.’

There is no guarantee offered by Football Index that investors will get their money back. The platform said that a cash balance held by any account would have ‘no guarantee that all funds will be repaid.’

An online petition has been started by irate customers demanding answers and for their net deposits to be refunded.