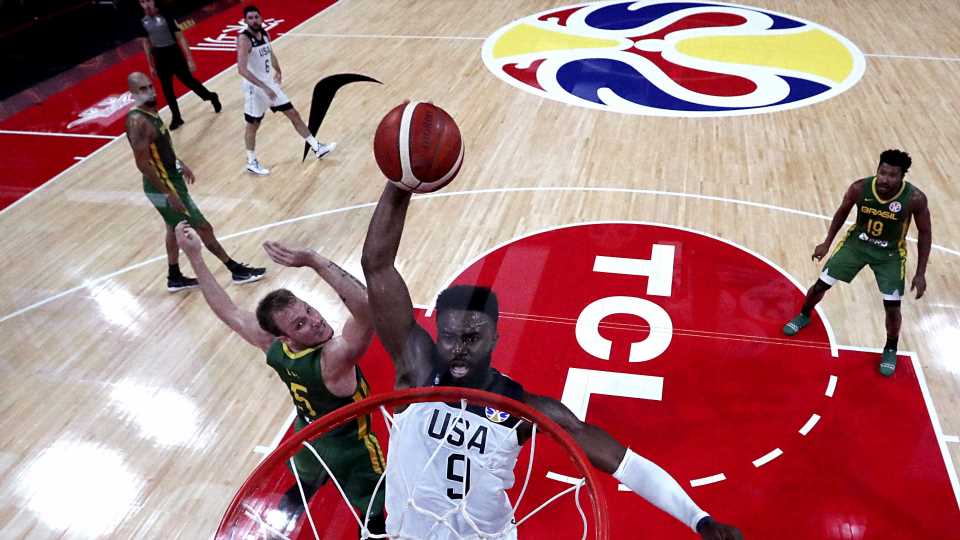 FIBA World Cup 2019: U.S. victory over Brazil wasn’t required — but it was non-negotiable

The United States won a game at the FIBA World Cup it didn’t have to win, except it is the U.S. and therefore must win every time.

The Americans’ passage into the Word Cup quarterfinals was assured as they prepared for their final second-round game against Brazil on Monday in Shenzhen. The Czech Republic’s victory over Greece eliminated Giannis Antetokounmpo and his crew in the earlier game of the doubleheader, clinching the Americans’ advancement.

So their 89-73 victory was mostly for pride, and to increase USA Basketball’s run of consecutive victories in senior men’s competition to 58. There hasn’t been a defeat in the World Cup or Olympics since a loss to Greece in the semifinals of what was then known as the FIBA World Championships.

The U.S. next will play France in the quarters on Wednesday at 7 a.m. ET, and there will be real consequence to that one. With a win, the Americans will head into the tournament’s medal round. If they lose, they will fall short of becoming the first team to win three World Cups in a row.

France features such NBA players as Rudy Gobert, Nicolas Batum, Frank Ntilikina and Evan Fournier, but lost Monday to Australia 100-98 in their final second-round game. That put the Aussies in the opposite bracket from the Americans and the French, in a win-or-go-home matchup with them.

Asked in the postgame news conference whether the U.S. needed to be better offensively to beat France, coach Gregg Popovich responded, “I guess when we play the game, we’ll find out if we can.”

“This is a lot different game than NBA basketball,” 7-footer Myles Turner said.

The U.S. was playing what amounted to Brazilian basketball’s hall of fame. About the only aging Brazilian superstar missing was Oscar Schmidt. But he’s 61 now, so he’s a few years removed from the oldest players in this group. But only a few. Anderson Varejao is 36. So is Leandro Barbosa. And Marcelinho Huertas. Marquinhos is 35. And Alex Garcia is 39.

Their coach, Aleksandar Petrovic, was ejected midway through the second quarter for arguing a non-call when Varejao drove the middle and was met by Turner, who stopped him from attempting a clean layup. So it was impressive they were able to hang even with a less-motivated U.S. team for most of three quarters.

“I thought Brazil really gave us a tough fight in that first half. They really wanted that game. They played with a lot of heart,” Turner said afterward. “But I think that second half we really turned it on.”

U.S. forward Jaylen Brown picked off a steal from Vitor Benite and passed to Derrick White for a layup that made it 56-48 with 4:18 left in the third. Then the lead went to double digits for the first time on a 3-pointer by Khris Middleton.

The Brazilians’ switch to a zone stalled the onslaught and allowed them to close to 64-56 on a Varejao bucket with 7 seconds remaining, but the U.S. inbounded to guard Marcus Smart, who pushed it up the right side, fired a fall-away 3-pointer at the buzzer — and somehow connected. That made it 67-56, and it was a rout from there.

“We picked it up defensively in the second half,” Popovich said. “That changed it for us.”

Smart was outstanding, joining with Brown in bringing a sense of ferocity to this game. The rest, understandably, simply went about the business of winning. Center Myles Turner was exceptional, scoring 16 points, grabbing eight rebounds and two steals and showing off a touch for bank shots that will serve him well as he continues his career. Point guard Kemba Walker scored 16 and passed for five assists and finished plus-22.

The victory did earn the U.S. a spot in the 2020 Olympics without having to go through the qualifying tournament. Somehow, winning three consecutive gold medals wasn’t enough. Instead, the Americans earned the right to head to Japan next summer as one of the top two finishers in this tournament from the Western hemisphere. That’s just weird, right?

“We’re thrilled that we’re qualified for the Olympics,” Popovich said. “With this new situation in qualifying, you don’t want to have to do that every year.”