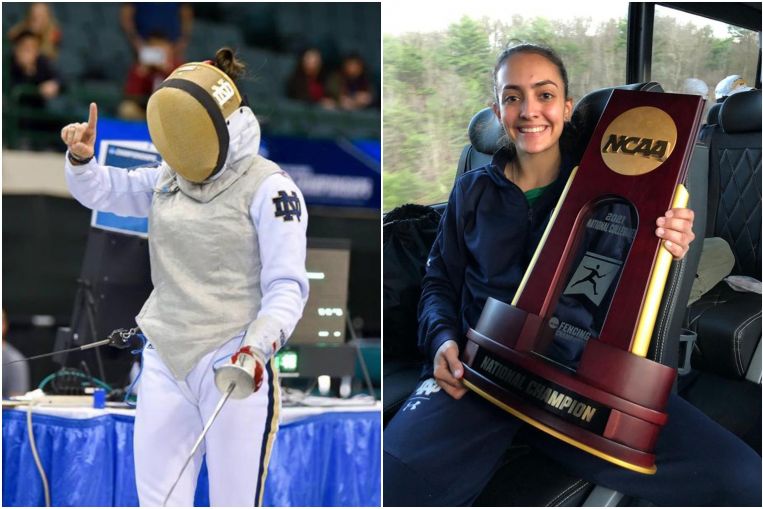 SINGAPORE – A year fraught with upheaval and uncertainty ended in an uplifting manner for Amita Berthier as the Singapore fencer and her University of Notre Dame team-mates clinched the National Collegiate Athletic Association (NCAA) fencing championships in the United States on March 28.

It was the school’s 11th national title, with Berthier also claiming a bronze in the women’s individual foil competition.

The past 12 months has proven tumultuous for the undergraduate, with the world going into lockdown because of the coronavirus pandemic and the sporting calendar, particularly the 2020 Tokyo Olympics, put on ice.

And even when training and competition resumed, she had to do so wearing both fencing and face masks, while undergoing Covid-19 tests every week.

The 20-year-old, the first Singaporean to win an NCAA fencing title, told The Straits Times: “Being part of the team and winning the championship as one of the key members is an amazing experience. The sense of camaraderie and team support is quite unimaginable. It just spurs you on.

“The victory is sweeter as these are not normal times – we have had to overcome tough training sessions, monitor our health regularly and learn to breathe behind layers of masks during intensive bouts… these require mental fortitude and good levels of physical conditioning.”

Placing third in the women’s foil event after losing 15-9 to team-mate Stefani Deschner in the semi-final, Berthier played a significant role in Notre Dame’s record victory as they finished with 201 points, the highest by any team in the current championship format.

She had also won a bronze medal in her first NCAA outing in 2019, before taking a gap year to focus on Olympic qualifying.

The world No. 60 added: “I fee1 I could have performed better in my event but I am happy with the way I fenced throughout. It is never easy fencing your team-mate, there were lots of mixed emotions, but the better fencer won.”

This latest feather in the former junior world No. 1’s cap will give her that extra boost when she attempts to secure a historic Olympic qualification at the April 25-26 Asian Olympic Qualifying Tournament in Uzbekistan.

Berthier said: “This NCAA experience has given me the opportunity to look at areas I need to finetune further and work with the coaches accordingly.

“I am excited about heading to the Olympic qualifiers and will give of my best. I will need to stay healthy, be mentally sharp and remain positive. This is a rare opportunity given to try and qualify for the Olympics and I endeavour to seize the chance to perform my best.”

Singapore Fencing congratulated both Berthier and Notre Dame for their respective milestones, and backed their athlete to keep breaking barriers at the upcoming Olympic qualifiers. Berthier will join Simon Lee (men’s epee), Kiria Tikanah (women’s epee), Kevin Chan (men’s foil), Jolie Lee (women’s sabre) and Choy Yu Yong (men’s sabre) in Uzbekistan as they attempt to be the first Singaporean fencer to qualify for the Olympics.

James Wong and Ronald Tan were the only Singaporeans to compete in the foil and epee events at the 1992 Barcelona Olympics by virtue of being Singapore’s top fencers.

Singapore Fencing vice-president David Chan said: “We recognise Amita’s success at the NCAAs as a huge achievement for her, not simply due to the high level of competition, but because we know the past year has been emotionally and mentally draining for her, being away from her family.

“Athletes should also be recognised for their journey instead of solely the end result, and we are already proud of her professionalism and tenacity in preparing herself for the Olympic qualifiers in these turbulent times.

“This is the last event through which we can qualify for the Olympics, and only the winners of each event gets the Olympic spot. These events are extremely tense and competitive affairs, and it is often hard to predict the winners. However, we believe our athletes are prepared and ready to make history at the qualifiers.”