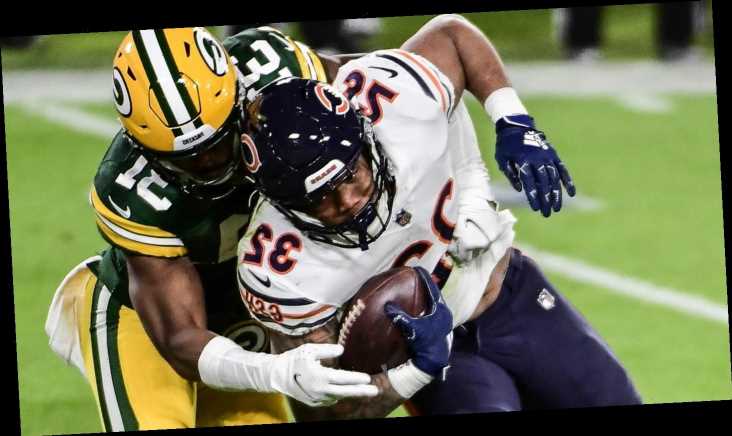 These players saw their fantasy values increase or decrease most based on their performances in Week 12:

QB Kirk Cousins, Minnesota Vikings: Cousins has quietly been putting up solid fantasy performances lately. Even without top wideout Adam Thielen, his 307-yard, three-touchdown gem against Carolina was his best game of the season. With Jacksonville up next, an even higher level could be in store.

RB Antonio Gibson, Washington Football Team: Gibson stuffed the stat sheet on Thanksgiving Day, rushing for 115 yards and three touchdowns. He also was targeted a season-high seven times in the passing game. The rookie has now scored in eight of his 11 games as a pro.

RB David Montgomery, Chicago Bears: With a string of good matchups still to come (Detroit, Houston, Minnesota, Jacksonville) Montgomery kicked off what should be a solid month of fantasy production with 143 total yards and a receiving touchdown against a Green Bay defense that will be the highest rated defense he will see again this year (until the Packers in Week 17).

Bears running back David Montgomery had his first 100-yard rushing game of the season in Week 12 against the Packers. (Photo: Benny Sieu, USA TODAY Sports)

WR Will Fuller, Houston Texans: Fuller was open early and often against a Detroit Lions defense that continues to struggle. He scored a pair of touchdowns with 171 yards receiving in a game that quickly turned into a blowout.

WR Jarvis Landry, Cleveland Browns: The Browns finally played a game in decent weather and they actually played well. Landry had the blow-up game fantasy managers had been waiting for, catching eight passes for 143 yards and a touchdown.

QB Cam Newton, New England Patriots: For as much as Newton deserves a bit of a pass, considering his receiving options, nine completions for 84 yards, no touchdowns and a pair of interceptions should take him out of consideration as a fantasy starter.

RB Alvin Kamara, New Orleans Saints: Taysom Hill taking over as quarterback has coincided with Kamara's two least-productive games of the season. His rushing lanes have been clogged and he's only been targeted three times in two games (for minus-2 receiving yards).

WR Antonio Brown, Tampa Bay Buccaneers: The problem with Tampa Bay receivers in fantasy is while they're all extremely talented, there's always a chance one of them gets overlooked in any given week. In Week 12, Brown drew the short straw with two catches for 11 yards.

WR Tyler Boyd, Cincinnati Bengals: It may be time to wave the white flag in Cincinnati. The loss of promising rookie quarterback Joe Burrow for the rest of the season has declawed the Bengals the offense. Boyd did see six targets against the  Giants but was only able to catch three of them for 15 yards.

TE Jonnu Smith, Tennessee Titans: Just when things seemingly couldn't get any worse, Smith goes an entire game without even seeing one target. The last time he posted a respectable score was in Week 5.