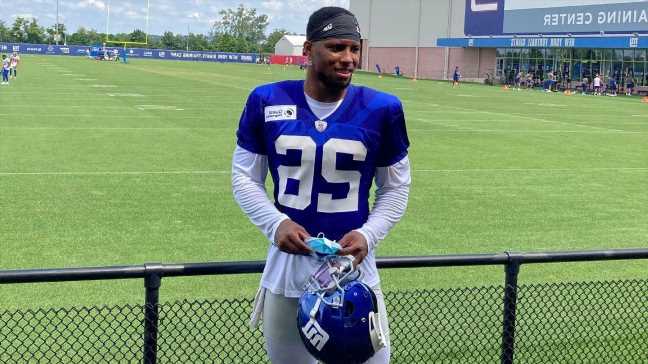 Week 1 of the NFL and fantasy football season is still a month away, but word of New York Giants running back Saquon Barkley being activated from the PUP list and returning to practice sure was an exciting way to begin the week.

While our consensus fantasy RB rankings provide an idea where each of our analysts currently value Barkley for the upcoming season, a simple number doesn’t tell the whole story.

Eric Karabell provided his thoughts on the Giants’ star in his ‘Do Not Draft’ List column, to give you an idea of where he stands on Barkley this season. But what about some of our NFL reporters and other fantasy analysts?

We kept the question quite simple in our latest roundtable:

What is your level of confidence in Saquon Barkley for the 2021 season?

Stephania Bell, Sr. writer and injury analyst
Moderate, trending up. Monday’s news was positive, but it bears repeating: Barkley’s was not an isolated ACL injury and, as such, it is more complex. His rate of progression — in both volume and intensity — may continue to be altered daily, based on how he responds to workloads. I have always maintained his status is fluid as a result; deficits he exhibited in June can be overcome … but when? He still needs to show he can play without limitations against real defenders, break tackles and be explosive to regain pre-injury form. Possible? Yes! Possible by Week 1? Shrug. Pre-injury volume out of the gate? Dalvin Cook would like a word.

Mike Clay, fantasy analyst and NFL writer
Very high. I never moved Barkley below third in my RB rankings and have been gladly snagging him near the Round 1/2 turn for weeks. Yes, a slow start (which could’ve included a missed game or two) was possible, but that’s OK when you’re talking about a rare, top-end talent with a path to 25-plus touches per game. Remember, Barkley is only 24 years old, led all RBs in fantasy points in 2018, was fourth in fantasy during 12 full games in 2019 and handled 88% of the snaps in his lone game in 2020. I’m willing to take on some risk considering his ridiculous upside.

Tristan H. Cockcroft, fantasy analyst
Reasonably high, let’s say a seven on a scale of 10. These days, I’m anti-injury risks in fantasy, but in Barkley’s case, what works in his favor is that he’ll be 317 days removed from ACL surgery at the time of the Giants’ first regular-season game, and he hasn’t suffered any notable setbacks so far in his recovery. It’s the progression/setback/progression/setback types that scare me, but Barkley’s rehab seems to follow a typical path for that particular surgery. Jamaal Charles, Deuce McAllister and Adrian Peterson are recent examples of top-shelf running backs who excelled in their first seasons upon returning, so it’s not like Barkley can’t do it. In fact, my primary fear isn’t the injury itself. It’s that the Giants could rein in his workload in the season’s waning weeks, should they fall out of contention.

Fairly high. Everything I’ve been told all offseason about his rehab was that it was going great and they were just being super-careful. Being off PUP and back in practice this early strikes me as a good sign. There’s always going to be an injury caveat with Saquon, it seems, until he can string together a couple of healthy seasons. But I think a lot of what he and the Giants were doing this offseason was an effort to keep outside expectations in check, and that he’s got a good chance to be ready to go — at least in some capacity — in Week 1. I wouldn’t take him over Christian McCaffrey, Dalvin Cook, Derrick Henry, Alvin Kamara, Ezekiel Elliott, Nick Chubb or maybe Jonathan Taylor, but I could see having him at the top of the next group.

Jordan Raanan, NFL Nation Giants reporter
High. Having seen Barkley run and cut out on the practice field (albeit in limited flashes), it’s hard not to think he will get back close to what he once was this season. We’ve seen players come back from torn ACLs before. Barkley is just 24 years old and 11 months removed from the injury. Sure, the Giants will limit his workload early in the season and be extra-cautious, but I expect him to be back at full capacity by Week 4 at the latest. At that point, he will be in the top-five running back conversation for the remainder of the season. I’m not betting against that talent.

Field Yates, NFL insider and fantasy analyst
Strong. While Saquon is still working his way back from a significant injury, there’s plenty of precedent for players returning to form following an ACL reconstruction. The fact that his injury occurred early in the 2020 regular season provides additional assurance that it won’t be long before he’s looking like himself again. And while Saquon started slow last season behind an uneven offensive line, we’ve seen the very best from him before — arguably the best back in football. With unlimited upside at full strength, I’m very confident in his outlook this year.