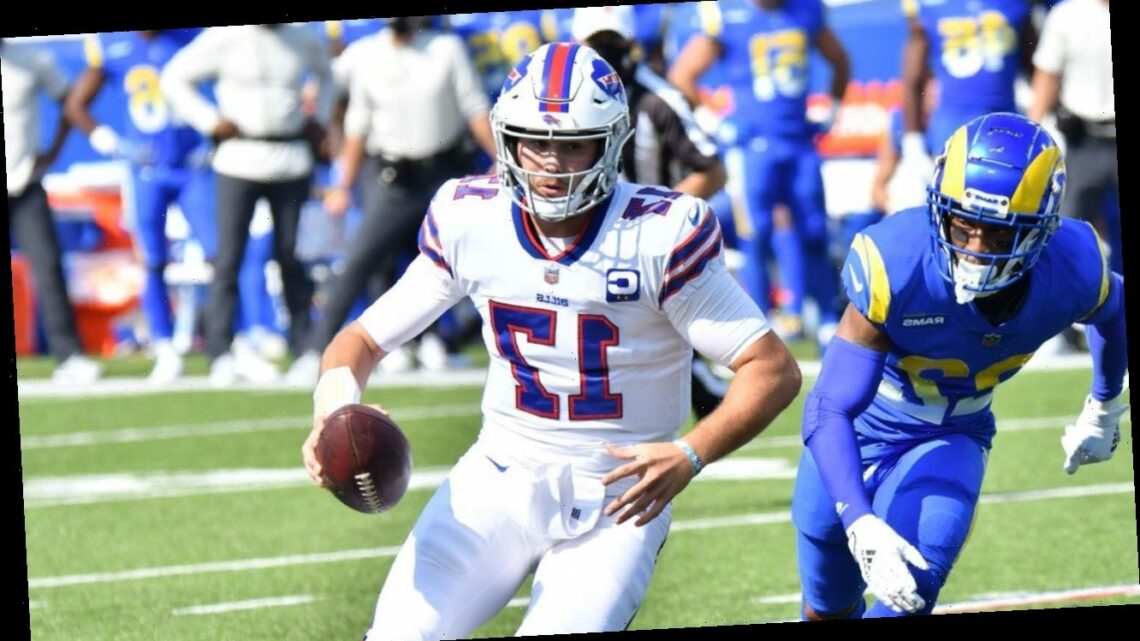 Week 3 of the fantasy football season featured plenty of notable performances around the NFL on Sunday. What should we make of them? Matt Bowen and Tristan H. Cockcroft are here with analysis on the biggest performers — and duds — of the week.

His performance thus far has been one of the most promising developments of 2020, and let’s get right to the history first. With his 31.2 fantasy points on Sunday, Allen has 93.9 for the season, and that is the third-most by any quarterback through his team’s first three games of any season since at least 1950, trailing Russell Wilson’s 102.0 this season (see below) and Ryan Fitzpatrick’s 97.4 as the Tampa Bay Buccaneers’ starter to begin 2018. But don’t let “Fitzmagic’s” tale from the remainder of that season down your optimism for Allen in this, which has all the markers of a huge breakthrough campaign. Allen has made monstrous strides with his accuracy, completing 71.1% of his overall pass attempts (58.8% in 2019), especially on deep throws, as he is 8-of-13 (61.5%) on passes that traveled at least 20 yards downfield and 30-of-45 (66.7%) on throws of 10-plus yards, after he completed just 22.2% and 44.5% respectively in 2019. Best yet: He did it against a Los Angeles Rams defense that presented his toughest 2020 matchup to date, a sure sign that Allen, rather than his matchups, deserves the full credit. You’re looking at a locked-in, weekly top-five QB: Lamar Jackson, Patrick Mahomes, Dak Prescott, Russell Wilson and Allen are probably going to capture those five slots in the rankings each and every week, barring any of them facing a super-stingy D. — Cockcroft

Tristan, I’ll add this on Allen: Look at the QB designed runs inside the tight red zone (10-yard line to goal line). On Sunday, Allen only rushed for 8 yards, but he did produce a touchdown on a speed option play. So, in addition to what Allen can do on schemed throws and second-reaction plays, his ability as a runner — which is definitely a part of the Bills game plan in scoring position — boosts his rapidly ascending fantasy value even more. — Bowen

Quarterbacks, they just keep raising the bar. If you thought Allen’s start to 2020 was impressive, take a look at Wilson’s: He’s the first quarterback, and fourth player at any position, since at least 1950 to score at least 30 fantasy points in each of his team’s first three games of a season. He has now scored 102.0 points total in those contests, which is the most by any quarterback and tied for the fifth-most by a player of any position through three team games during that same time span. Wilson’s play has just been on another level this season, and he has two brilliant matchups upcoming in the Miami Dolphins and Minnesota Vikings. — Cockcroft

Dalvin Cook has the look

The scoring production was there for Cook in the first two weeks of the season (three touchdowns), but this is what managers expected when they drafted him as a top-5 play at the position. Cook looked really explosive on Sunday — versus a quality Tennessee defense — finishing with 199 total yards and a score on 24 touches. But this is also what you get from Cook when the Vikings can play within the flow of their offense. Remember, Minnesota is a run-heavy team that builds out to set up the play-action pass game. And when Cook gets his 20-25 touches, he will be in position to produce upper-tier RB1 numbers. — Bowen

I’m plenty impressed by his play through three weeks, including the prime-time Week 2 contest during which he had his best individual weekly score (24.5), and it’s time to declare Burrow a locked-in weekly QB2. He has shown plenty of poise in the pocket, good accuracy (64.5% completion) and, despite not showing it on Sunday, the mobility you want in a fantasy quarterback. Remember, Burrow’s Weeks 1 and 3 matchups weren’t exactly the easiest matchups, especially for a rookie passer, and despite that schedule he has totaled 61.2 fantasy points, becoming only the 18th quarterback since at least 1950 to score at least 60 points in his first three career starts. There are some tough matchups in Burrow’s future, including the Weeks 5-6 road assignments at Baltimore and Indianapolis, but he’s a definite “go” for Week 4 against the Jacksonville Jaguars. — Cockcroft

Tristan, I think you can start Burrow in Week 4 as a QB1 in deeper leagues versus that Jags defense. We are seeing all of the traits here that made Burrow the No.1 pick. He’s a decisive thrower, the processing speed jumps, and his movement ability creates more production opportunities. Now, toss in the scheme fit with formation, alignment and route design. There’s a reason Burrow — in a heavy volume pass offense — has thrown for over 300 yards (with 5 touchdowns) in his last two games. — Bowen

His 30.5 PPR fantasy points Sunday were the most by any wide receiver, and he enjoyed a 36% (9-of-25) target share in doing it! Rookies reaching the 30-point plateau aren’t that uncommon, but he shares the future-superstar skills of many of the other names on the list from the past decade, including Odell Beckham Jr. (5 times), Amari Cooper, Michael Thomas (2 times), JuJu Smith-Schuster (2 times), Calvin Ridley and A.J. Brown. — Cockcroft

After Jefferson’s breakout game versus Tennessee (7-of-9 targets, 175 yards receiving, one touchdown), the rookie wide receiver will be a prime pick-up on waivers this week. Rostered in just 33.8% of ESPN leagues, we saw how the Vikings can scheme up the rookie — especially off play-action. And with a matchup versus Houston in Week 4, Jefferson has WR3 upside in deeper league formats. — Bowen

The recipient of a boost in playing time following Christian McCaffrey’s (ankle) injury, Davis put forth a 23.1 PPR fantasy point total, but also the kind of workload you should come to expect during this next month (or more). He hauled in 8-of-9 targets; it’s that receiving contribution that should buoy his fantasy value, on a young Panthers team that should play a fair share of the time from behind. It only helps that he has a quarterback who loves to lean on his running backs in the passing game, as in Teddy Bridgewater’s nine starts since the beginning of 2018, he has targeted the position 26.1% of the time (76-of-291), sixth most-often among quarterbacks with at least that many starts during that time span. Added in 76.2% of ESPN leagues between Weeks 2 and 3, Davis should have a flex spot in your lineup as he and the Panthers next face the Arizona Cardinals. — Cockcroft

Carson Wentz, QB, Philadelphia Eagles: After another multiple-interception game — his third straight to start the season — is it time to sit Wentz down and look for a replacement quarterback in your lineup? Sure, Wentz battled today. We can see that. But he’s looked tentative as a thrower this year, and his ball location has been inconsistent. Now, add in more injuries for the Eagles pass-catchers, plus a three game stretch coming up for Wentz against the 49ers, Steelers and Ravens defenses. Brutal stuff. I wouldn’t drop Wentz from your roster at this point, but I do recommend going to your QB2 or picking up a new starter off waivers. — Bowen

Brandon Aiyuk, WR, San Francisco 49ers: A hamstring injury might’ve cost him Week 1, but Aiyuk returned to play 42 of 59 (71%) snaps in Week 2, then burst forth with a 21.1 PPR fantasy point performance on Sunday. He capitalized upon injuries to George Kittle (knee) and Deebo Samuel (foot), and while their eventual return — Week 4? — will probably prevent a repeat of his 23% (8-of-35) target share, Aiyuk might’ve done enough to earn himself a good amount of run as a slot and/or outside receiver, especially in three-receiver sets. Coach Kyle Shanahan kept getting creative with the rookie in Week 3, including a 19-yard rushing touchdown, and that versatility could prove useful in the future. Certainly Aiyuk warrants a pickup as you build your depth. — Cockcroft

Darrell Henderson, RB, Los Angeles Rams: Henderson (120 total yards, one score) was the lead back on Sunday, totaling 21 touches to Malcom Brown’s seven. And the Rams are getting much better play from the interior of the offensive line, plus the amount of misdirection in Sean McVay’s offense creates leverage in the run game. Now, we have to wait on the injury status of rookie Cam Akers heading into Week 4. However, if Akers is down again, then Henderson is a solid RB2 play versus a sub-par Giants defense. — Bowen

Jerick McKinnon, RB, San Francisco 49ers: Can anyone stay healthy in that San Francisco 49ers backfield? With Tevin Coleman (knee) on injured reserve and Raheem Mostert (knee) also sidelined, McKinnon put together a third consecutive productive fantasy point total despite limited touches — although his 17 in this one were easily his season high. Unfortunately, he reportedly suffered a rib injury in the process, which bears watching during the next several days. Jeff Wilson Jr., who had 15 touches and a backfield-leading 21.9 PPR fantasy points, would be the next man up, but keep an eye on JaMycal Hasty, promoted from the practice squad over the weekend, who warrants a just-in-case stash. — Cockcroft

Darren Waller, TE, Las Vegas Raiders: Waller will be back in the TE1 mix next week, but today’s line – 2-of-4 targets, nine yards receiving – was a classic example of Patriots’ head coach Bill Belichick erasing an opposing team’s top target with bracket techniques, robber coverage, more. With wide receiver Henry Ruggs out with an injury, limiting the Raiders ability to press the top of the secondary, New England could roll safeties down to “double” Waller. — Bowen

Keenan Allen, WR, Los Angeles Chargers: With Justin Herbert at quarterback for the Chargers, Allen is seeing top-tier volume again. On Sunday, Allen caught 13-of-19 targets for 132 yards – including a touchdown reception on a laser throw from Herbert in the red zone versus Cover 2. And after two weeks with Herbert as the starter in L.A., Allen has now hauled in 20-of-29 targets for 228 yards. Isolation throws, Hi-Lo reads, quicks. That’s where Herbert wants to go with the ball. And it should put Allen in the mid-tier WR2 mix next week versus the Bucs. — Bowen

Let’s talk a little about D/ST, shall we? The Indianapolis Colts scored a whopping 27 fantasy points on Sunday, which was more than all but 11 individual players scored, and it was 10 more than any other team defense/special teams scored in either Weeks 1 or 2. It was the second consecutive week-topping score for the up-and-coming unit, which has quickly developed into one of the best in fantasy. Also important was the fact it came against a miserable New York Jets offense, and one that has now seen opposing D/STs total a league-leading 47 fantasy points through three games. The Jets’ offense has been riddled with injuries, has a weak offensive line and its quarterback, Sam Darnold, made miserable throws in this game, things that make this the No. 1 offense to target when seeking D/ST streaming matchups. There are a few coming up, in fact: The Denver Broncos, the Jets’ Week 4 opponent, are available in 58% of ESPN leagues; the Arizona Cardinals (Week 5) are available in 62%; and the Los Angeles Chargers (Week 6) are available in 43%. — Cockcroft