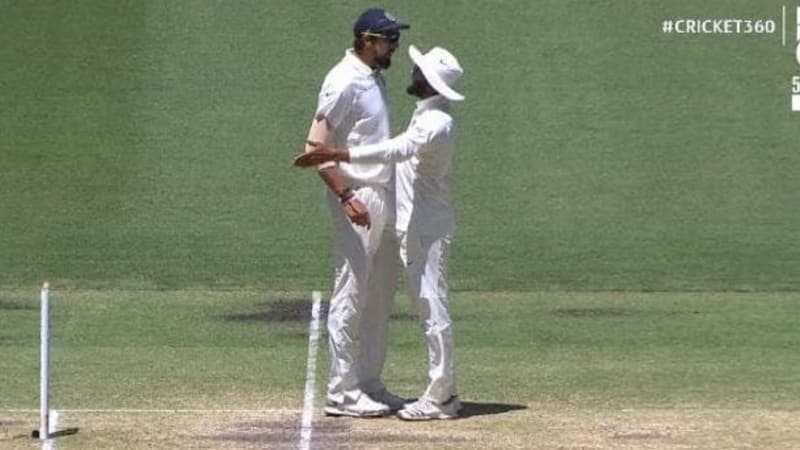 Indian fast bowler Ishant Sharma directed a vulgar sledge at his own teammate as the tourists self-destructed in a hostile second Test against Australia.

On a bruising afternoon of the fourth day when Australia laid the platform for what on Tuesday culminated in a pressure-releasing 146-run win, Sharma and teammate Ravindra Jadeja went at each other. 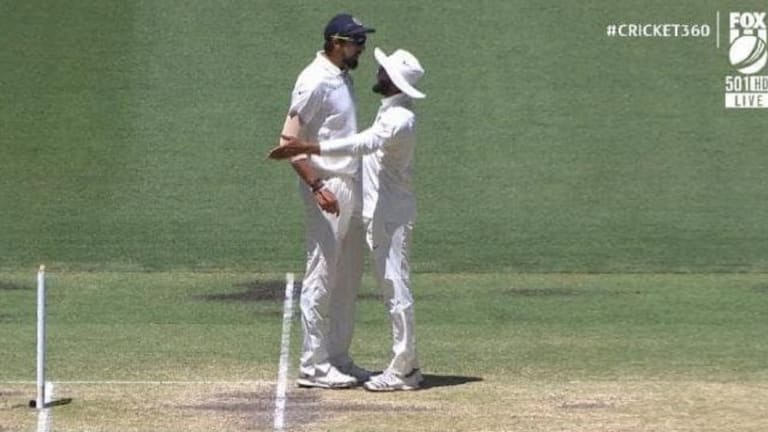 The two men raged in their native Hindi but this was later translated into English. The footage was captured by host free-to-air broadcaster Channel Seven, but it did not broadcast the audio.

The incident unfolded when Sharma said to Jadeja: "Don't wave your hand at me. If you want something, come to me and say it."

Jadeja responded: "Why are you saying so much?

Jadeja's next comment was not picked up by stump microphones but Sharma replied: "Don't tell me also. Don't talk bullshit."

The incident, involving finger pointing and lasting for about 90 seconds, highlighted the pressure the tourists were under, squandering the advantage they had enjoyed when taking a 1-0 series lead in Adelaide last week.

It unfolded when Nathan Lyon was hit in the helmet while batting and play had stopped.

Fast bowler Mohammed Shami – who later took aim at selectors for not picking a specialist spinner – and another teammate had to intervene.

Kohli was not asked specifically about the incident after play but said the increasing use of stump microphones was not an issue. Under previous ICC rules, stump microphones had to be turned down between deliveries, meaning a lot of the players' chatter wasn't broadcast, but they now remain on at all times.

"With the stump mics and cameras and all these things, honestly, when the bowler is bowling, you aren’t thinking whether the stump mic is on or the camera is on or not," he said.

"And when you are facing that ball, literally, there is no one in the stadium apart from you and that ball. So, these things are totally irrelevant, and you are actually not aware of them when you are on the field. It’s never bothered me, it’s never been something that’s of importance to me to be honest. For me it’s irrelevant."

Former Indian batsman Aakash Chopra said "in fighting" may be too strong a word but admitted the spat had been "animated".

"When you have people in a group, there will be times when you have a difference of opinions," he said.

"Who knows what they are talking about but it does seem pretty animated. There was lots of finger pointing. They were separated on a couple of occasions," he said.

"They came back together again late and then Shami gets involved. He was just waiting at the top of his mark waiting to bowl. Things have, obviously, got a little bit heated between these two.

"Remember, Jadeja is just the substitute fieldsman. Ishant, probably in the middle of a bowling spell, might have wanted him at mid off or mid on – who knows what it was.

"Not just between Australia and India, but also looks like a little bit on in-fighting between the Indians."

Jadeja's role in the Test had also raised eyebrows, for he spent a significant amount of time on the field as a substitute despite the tourists having no injuries.

The tourists will be keen to start afresh in Melbourne ahead of next week's Boxing Day Test, for their week in Perth was forgettable.

Shami also turned the heat on Kohli, in his case publicly disagreeing with India's decision not to play a frontline spinner.

Master spinner Ravi Ashwin was ruled out of the Test because of an abdominal strain, prompting the tourists to field four specialist quicks without a frontline spinner for only the third time in their Test history. Jadeja, an accomplished left-arm spinner with 185 wickets in 39 Tests, could have been drafted in.

"The team management makes these decisions. We can’t do anything about it. We had one spinner who didn’t bowl badly," Shami said.

"If you ask me, I feel there should have been a spinner, but these things depend on your management."

Kohli, however, said the tourists had not wanted to include a specialist spinner.

"Yes, we could have considered that. If you see, the rough (on the pitch) didn’t have much assistance. It was just the pace on the ball that (Nathan) Lyon bowled that he got the wickets that he got," he said.

"We as a team didn’t want to think that we definitely wanted to consider a spinning option on this pitch, especially having a look at the pitch on day one and how we thought it would play on the first three days, and exactly played out that way. We thought a fast bowler is going to be more productive and more helpful for us as a team."

‘On The Basis Of Sex’ Star Felicity Jones Urges We Must Protect Women’s Rights: ‘Our Fight Continues’