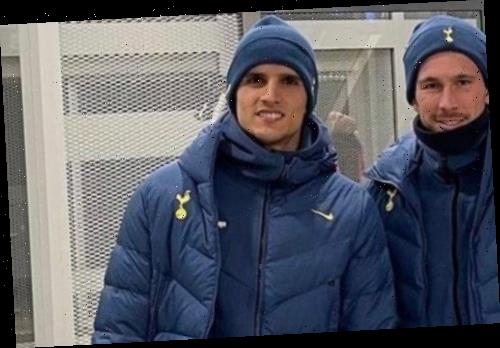 TOTTENHAM ace Erik Lamela has denied he was guilty of a fashion faux pas after Spurs' Europa League first leg against Wolfsberg.

Lamela was snapped alongside team-mate Pierre-Emile Hojbjerg after Spurs' 4-1 win over the Austrian side on Thursday – which was played in Hungary due to coronavirus restrictions.

A fan on Twitter spotted that the Argentine seemed to have zipped his puffer jacket to another jacket he was wearing underneath.

Fortunately Lamela saw the funny side, responding: "It just seems [like it].

Lamela's followers were less than convinced by his rebuttal, although he may have started a new trend if some of the responses are anything to go by.

One fan replied: "Actually pretty smart. Warmth of two coats, only one zip to undo."

Another tweeted: "Ngl that half puffer jacket and half training jacket doesn't even look bad."

Lamela notched a first assist of the season after coming off the bench against Wolfsberg, setting up Carlos Vinicius for Spurs' fourth goal.

Goals from Son Heung-Min, Gareth Bale and Lucas Moura had given Jose Mourinho's side a comfortable first half lead.

Wolfsberg's Michael Lindl made it 3-1 from the penalty spot and Spurs were given a fright when Christopher Wernitzig's effort thumped against the bar and bounced off the line.

But Spurs managed to restore their three-goal advantage in the 87th minute, as Lamela nodded on Hojbjerg's cross to present Vinicius with a tap-in inside the six-yard box.

The return leg will be played in London next week but before that Spurs face a trip to fifth-placed West Ham on Sunday.

Lamela and co will be hoping to close the six-point gap on their London rivals and get their top-four tilt back on track after just one win in their last five Premier League matches.

TikTokers pushing conspiracy theory that snow in Texas is ‘fake’