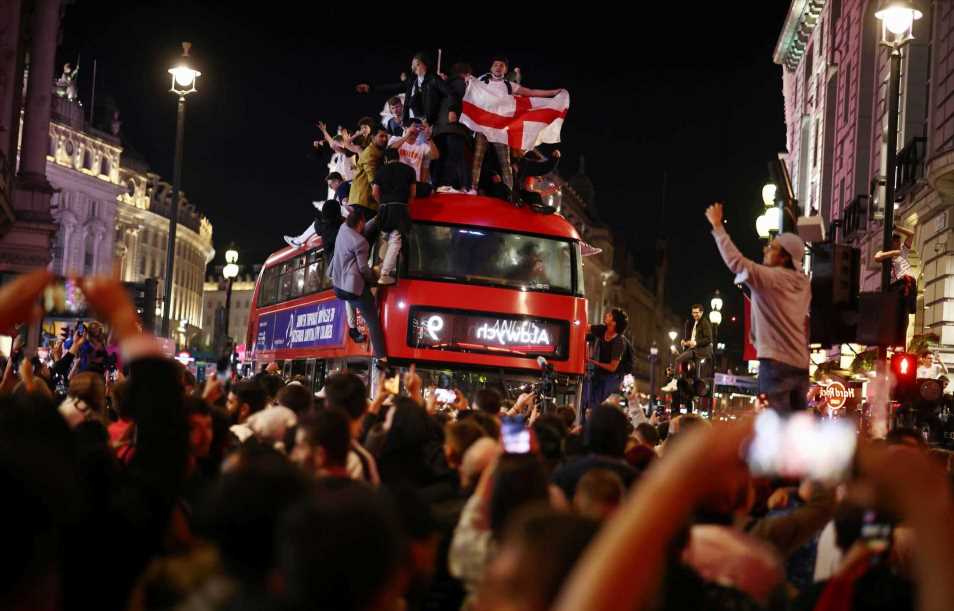 THE ROAR of success can be heard across London as buzzing Three Lions fans party in the streets – with some even scaling a double decker bus after England's sensational win scored them a place in the final.

Chaotic scenes have erupted throughout the city as jubilant supporters clambered on top of a red bus after the squad crushed Denmark to make it to the country's first major tournament final in 55 years. 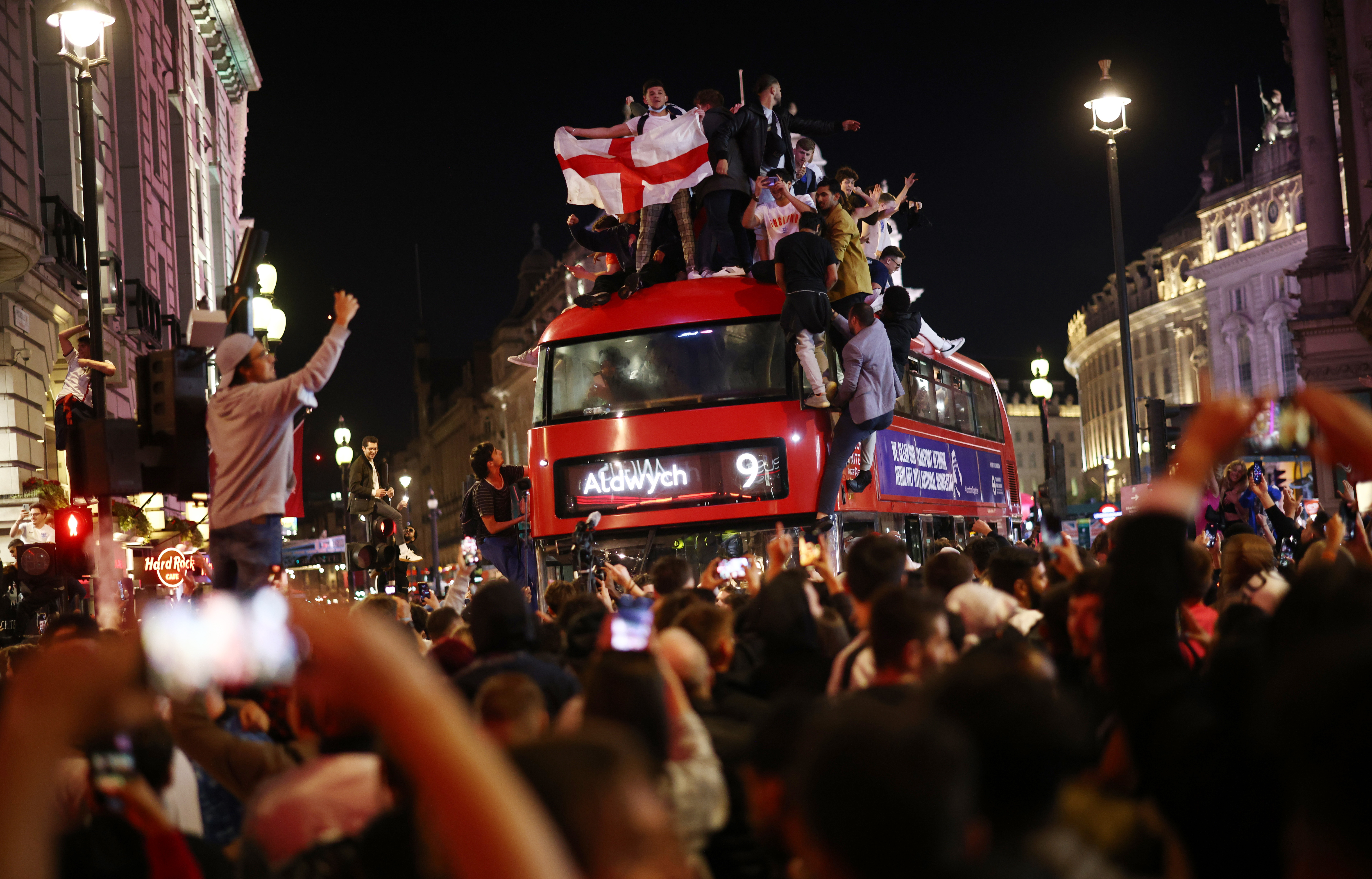 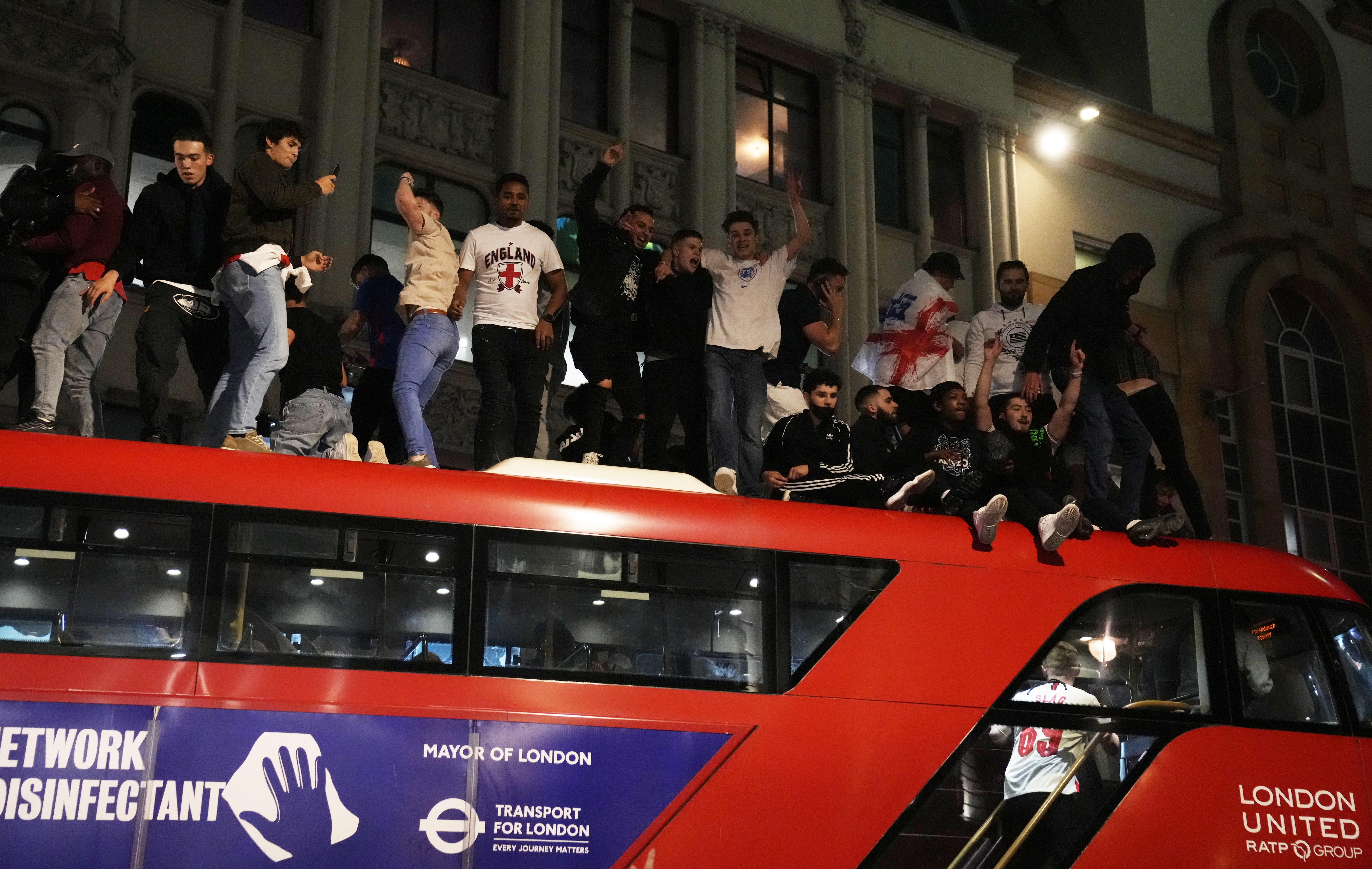 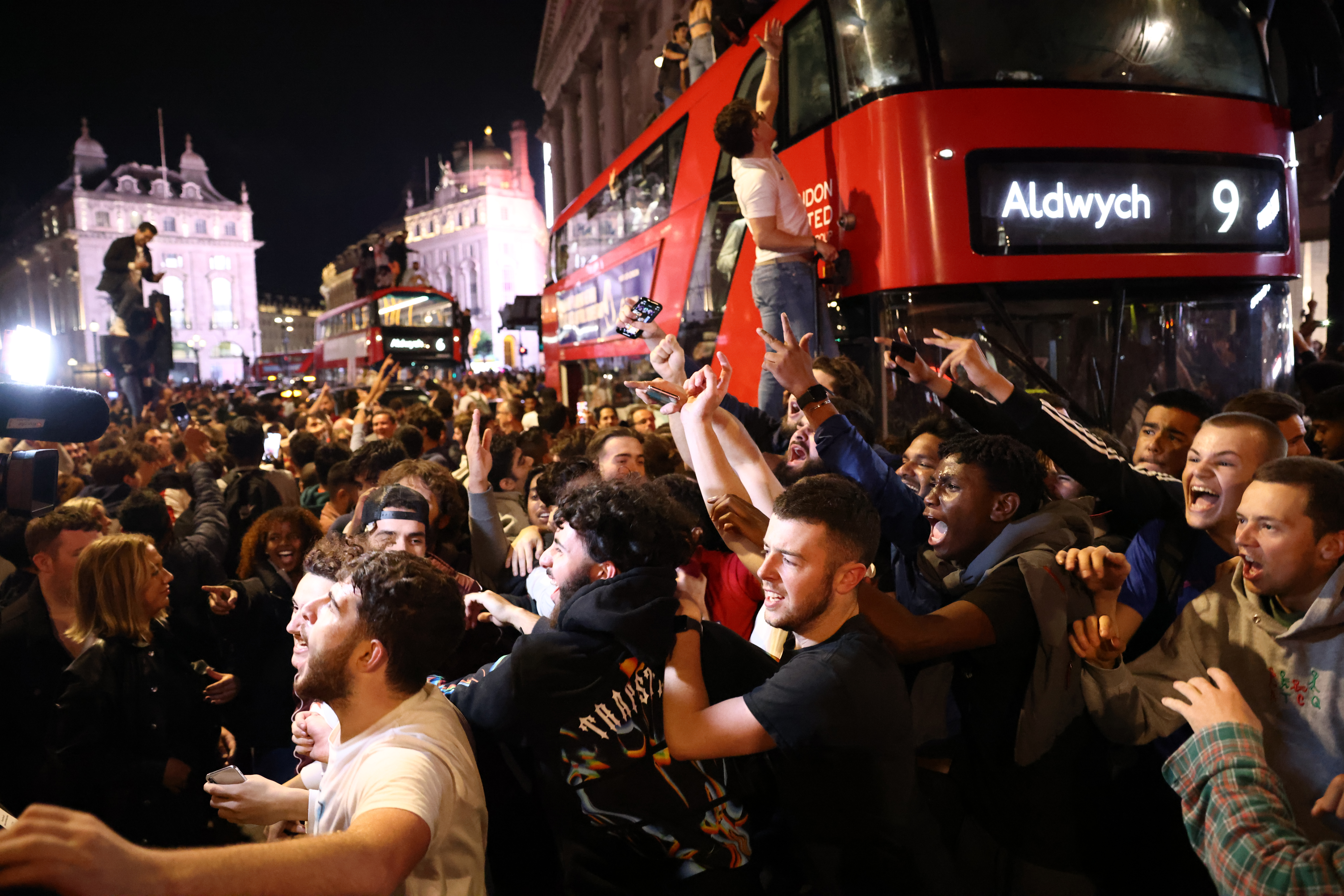 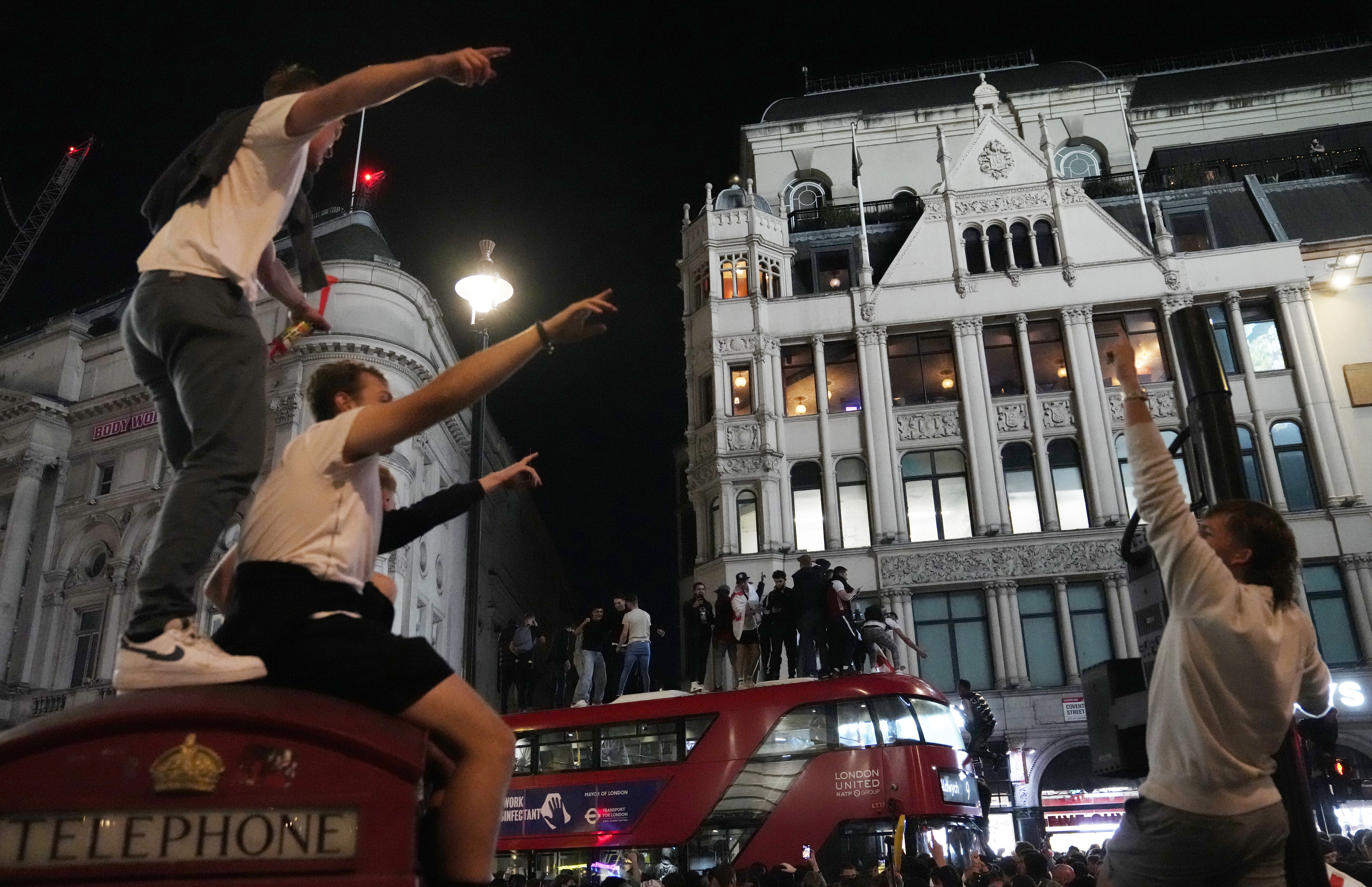 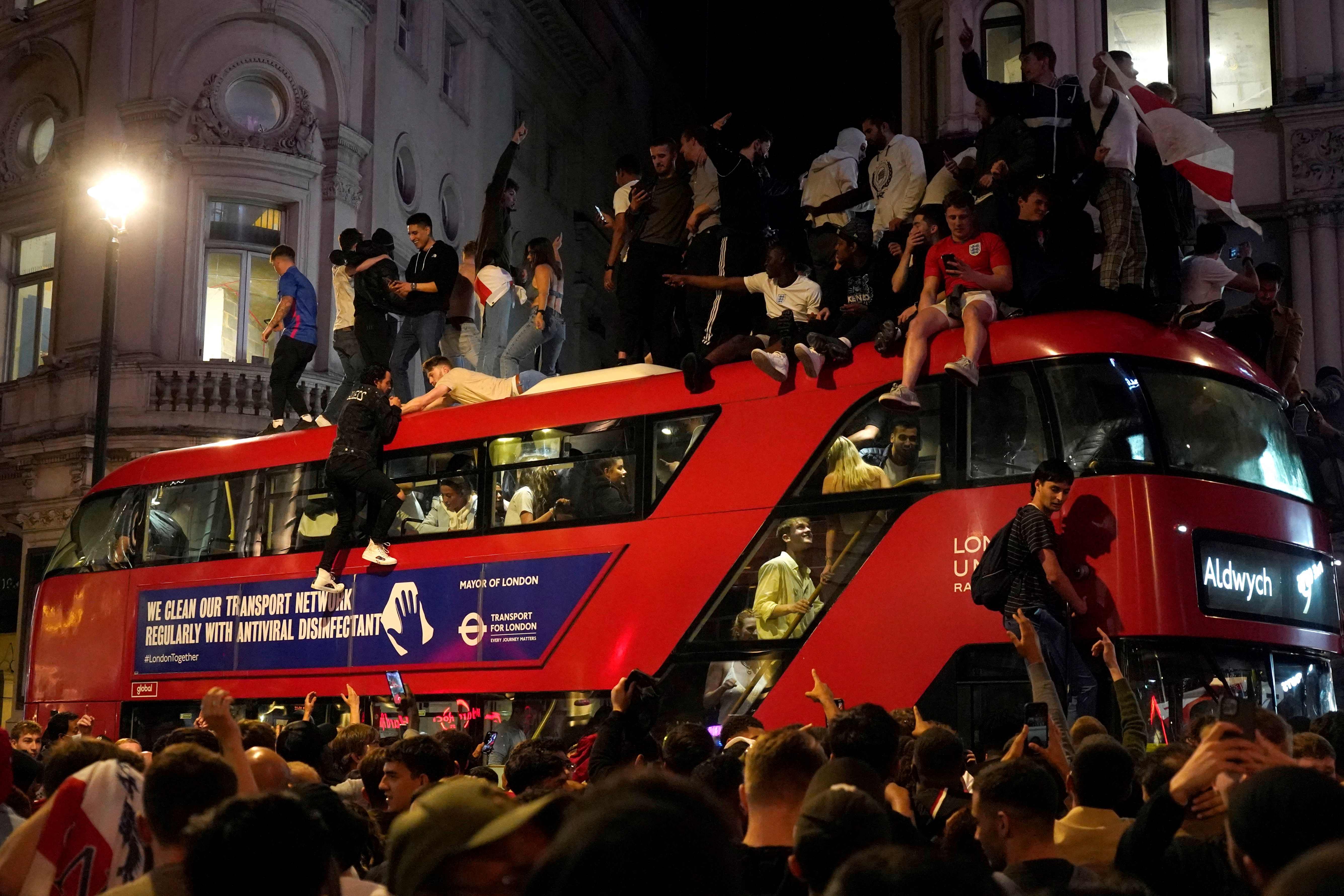 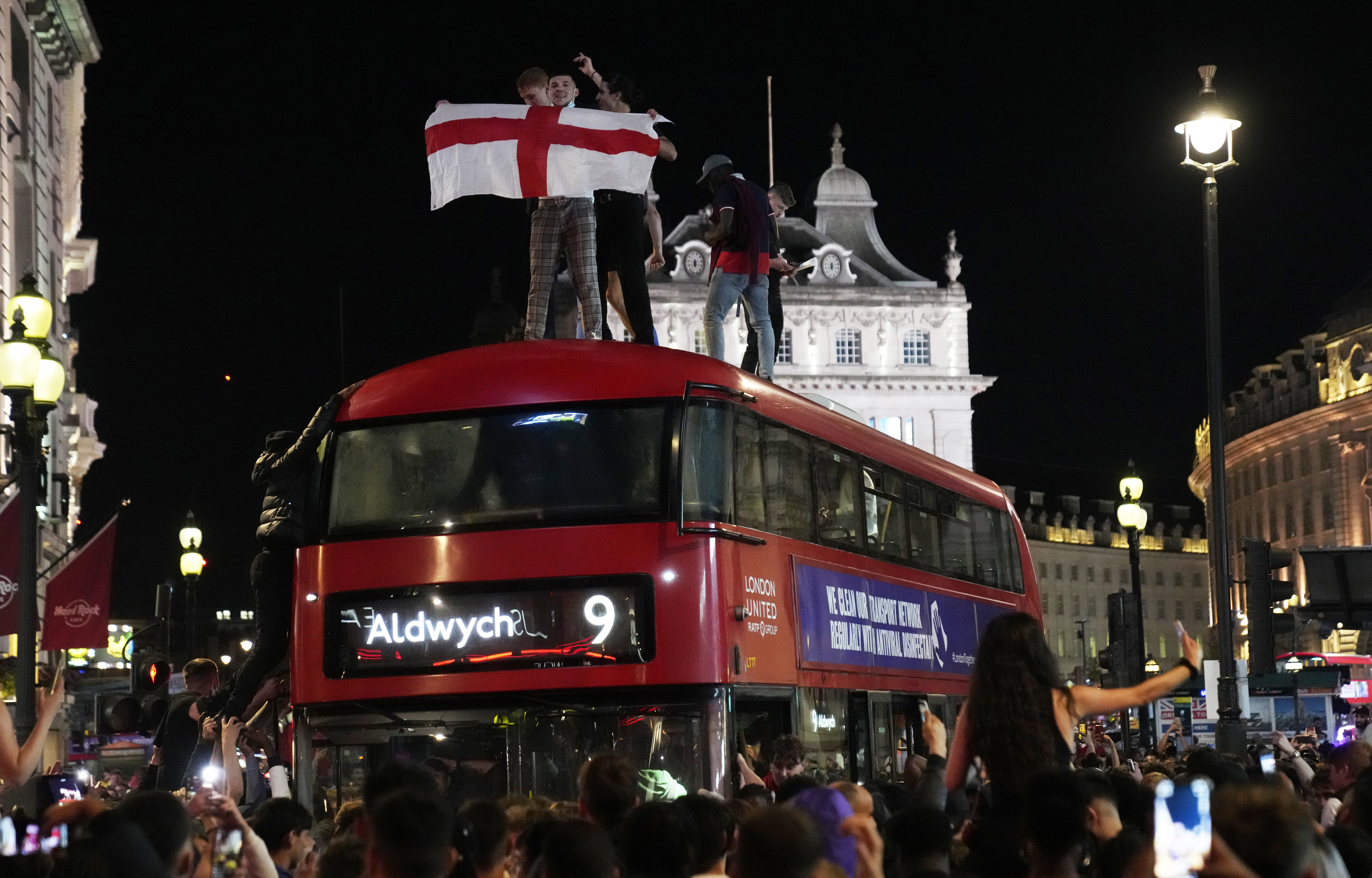 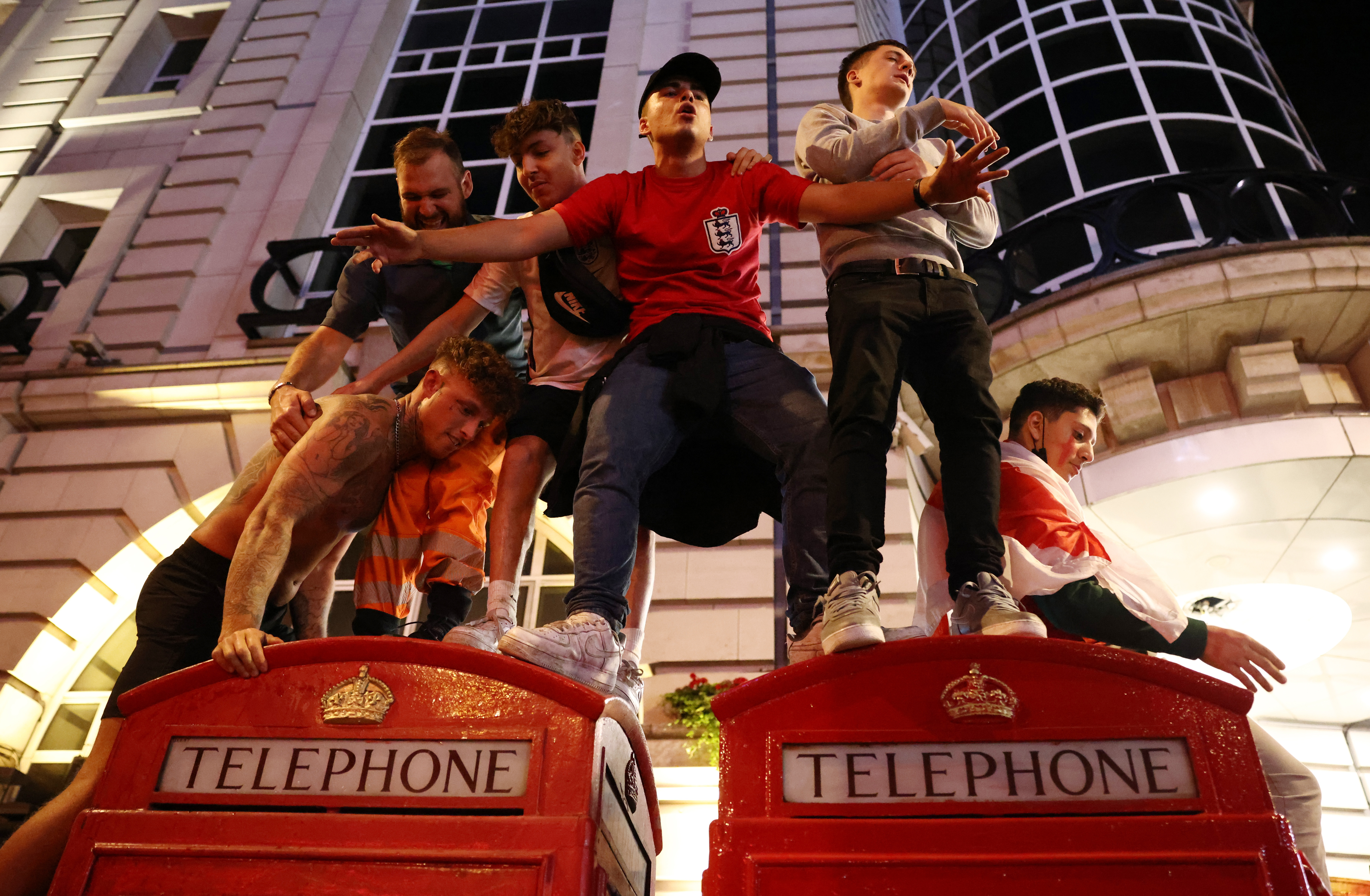 Fired-up fans were caught on camera climbing onto a buses' roof in Piccadilly Circus before brandishing flags, dancing, and chanting as crowds swarmed the street below to celebrate of England's historic victory.

Others hyped footie fanatics have been snapped mounting lampposts and telephone boxes amid the sheer pandemonium following the heart-stopping match.

Crowds could be heard chanting "England" in unison as the excitement gripping the nation shows no sign of stopping.

The nail-biting game at Wembley ended with a sensational win for Gareth Southgate's side – after the nation backed the boys for two hours in an electric semi-final showdown.

England fans joined the players in singing the iconic Sweet Caroline as the team celebrated their monumental win.

Fans stood with arms aloft in the stands to cheer on their heroes after victory was secured at the end of extra time. 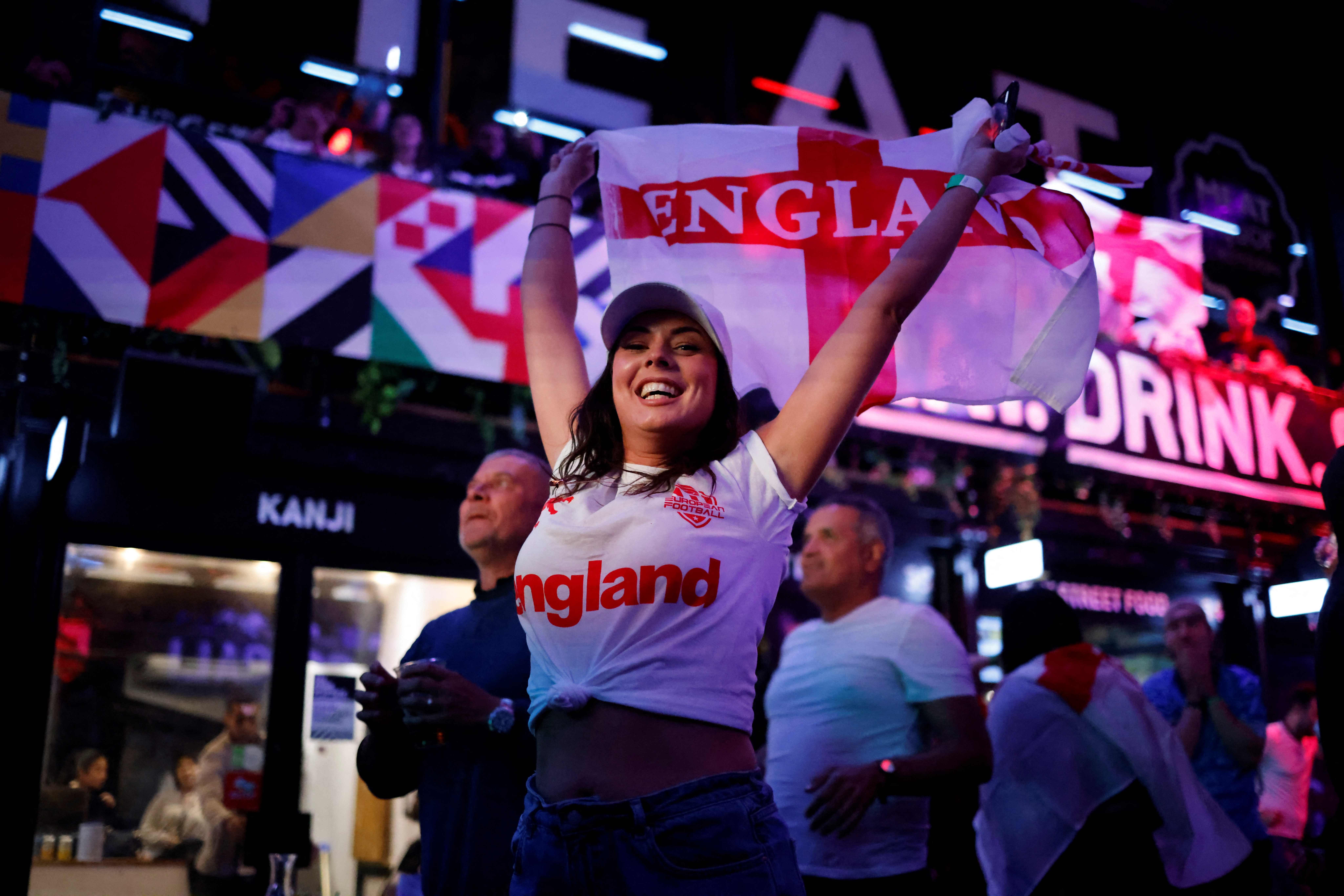 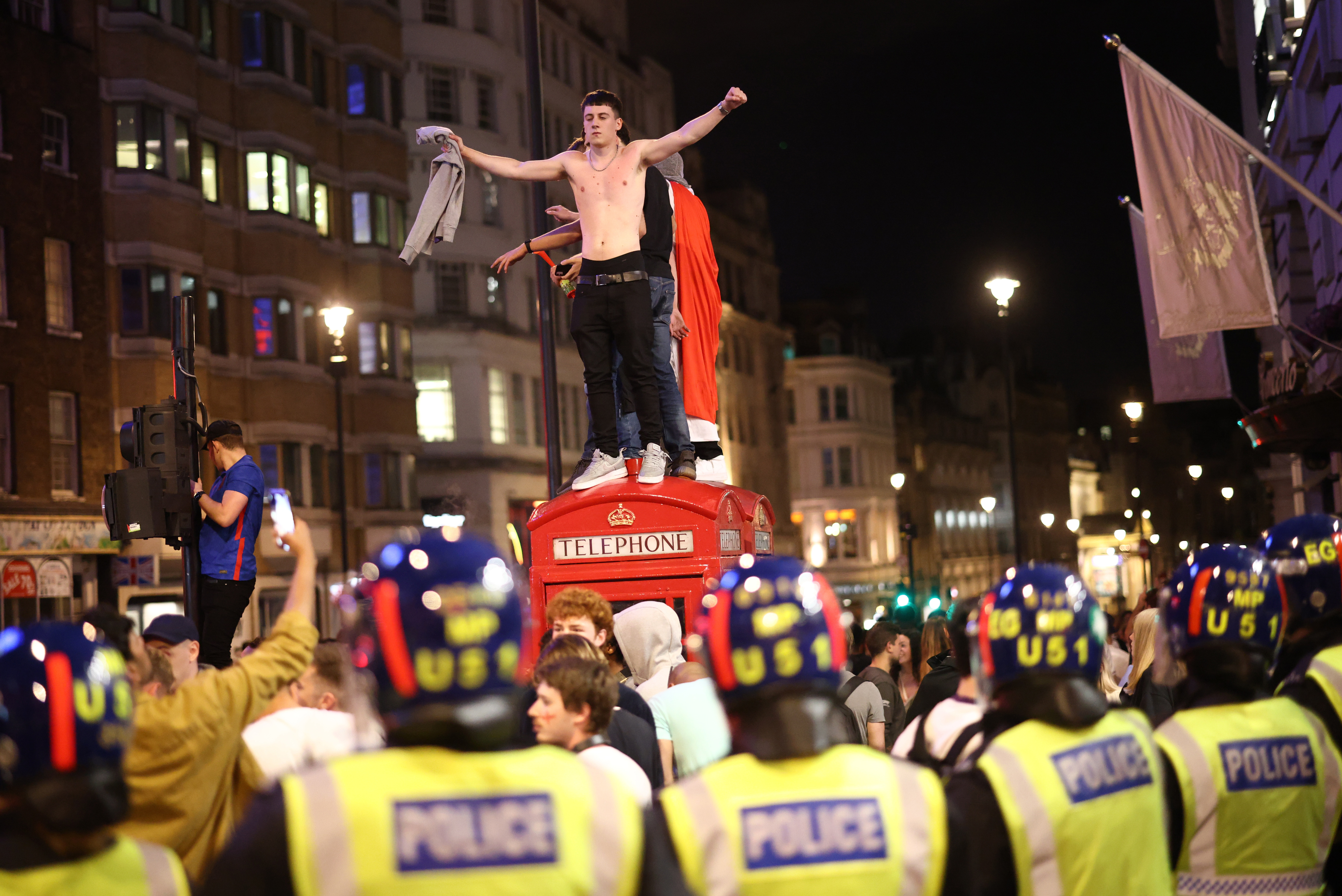 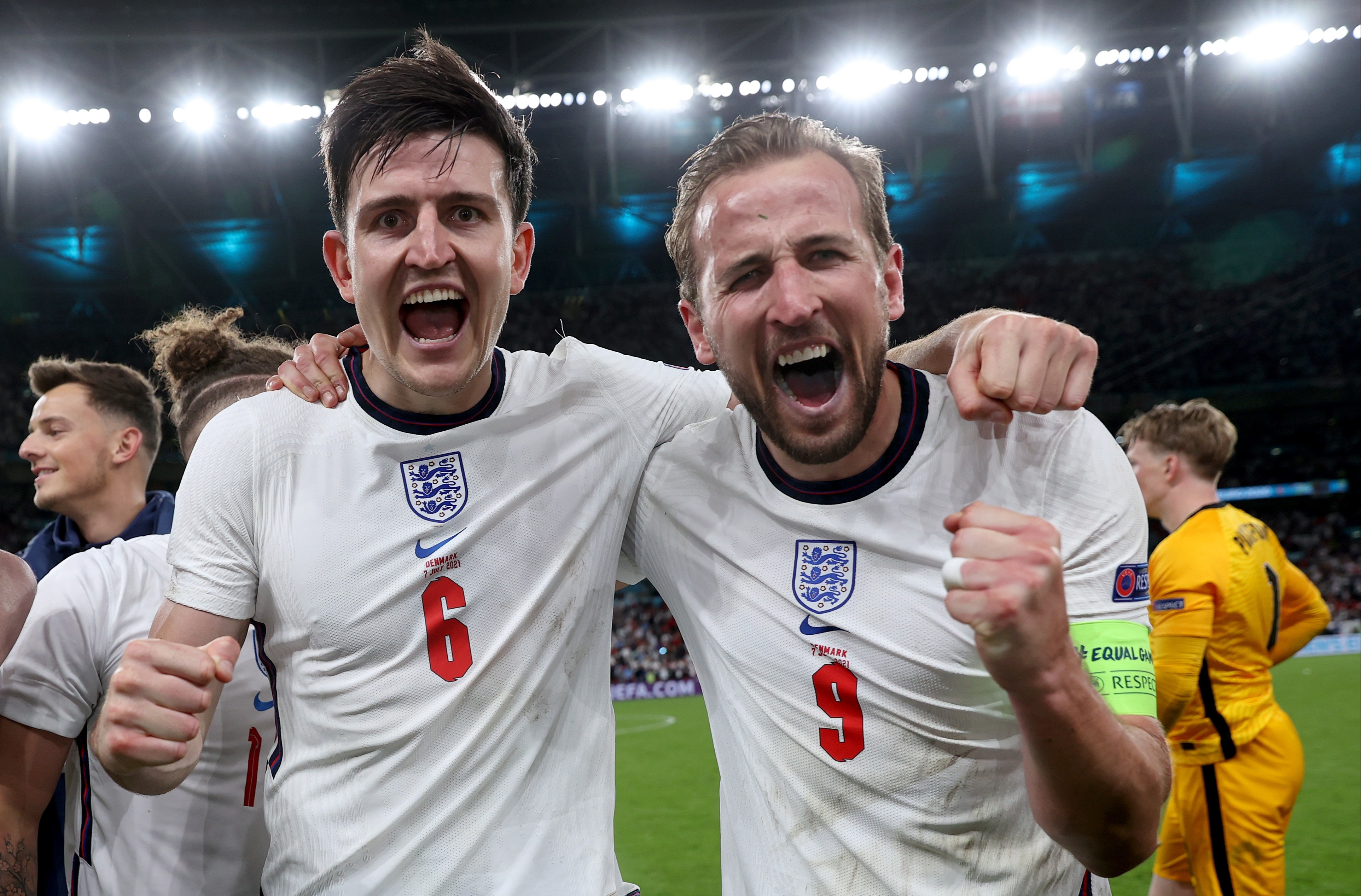 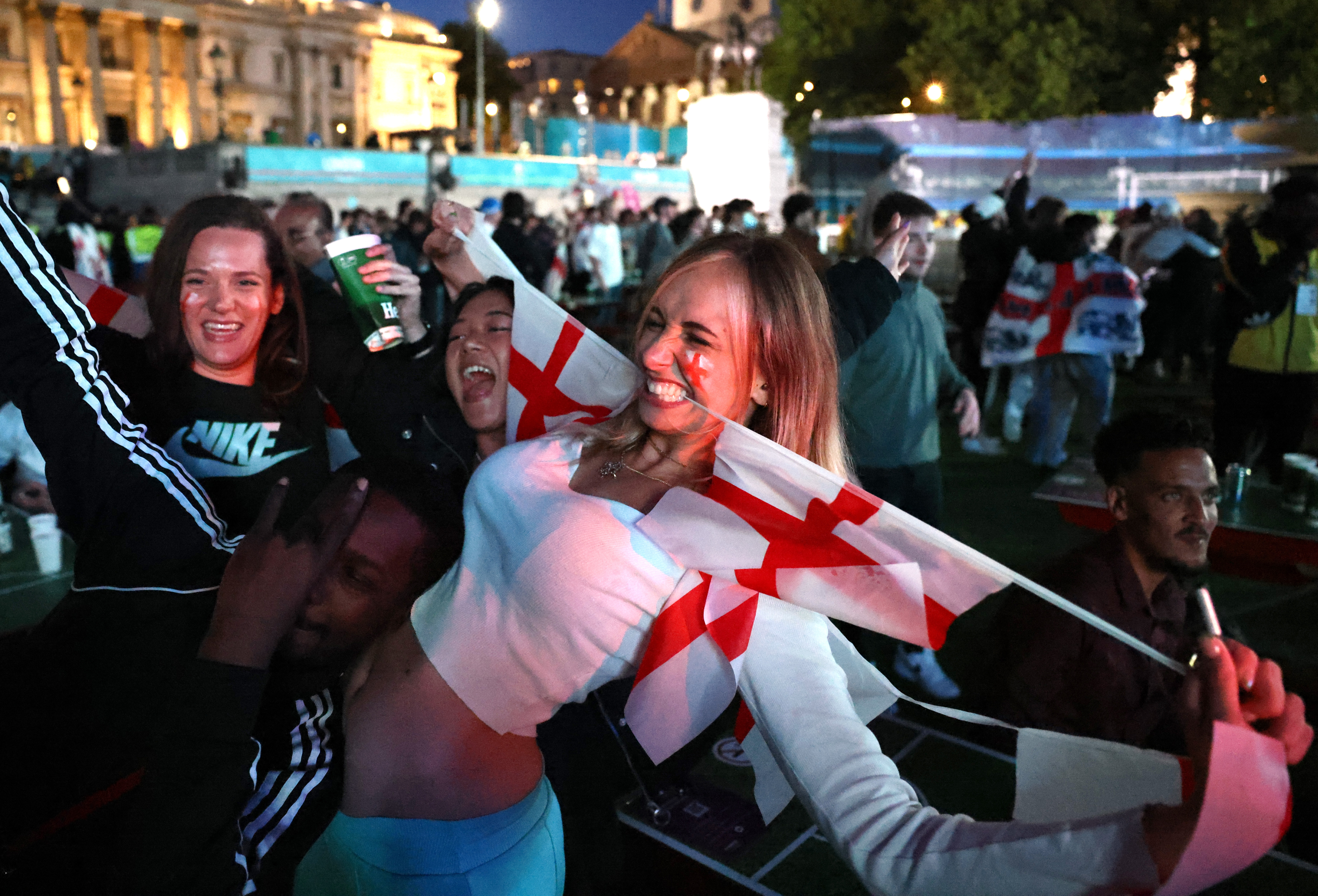 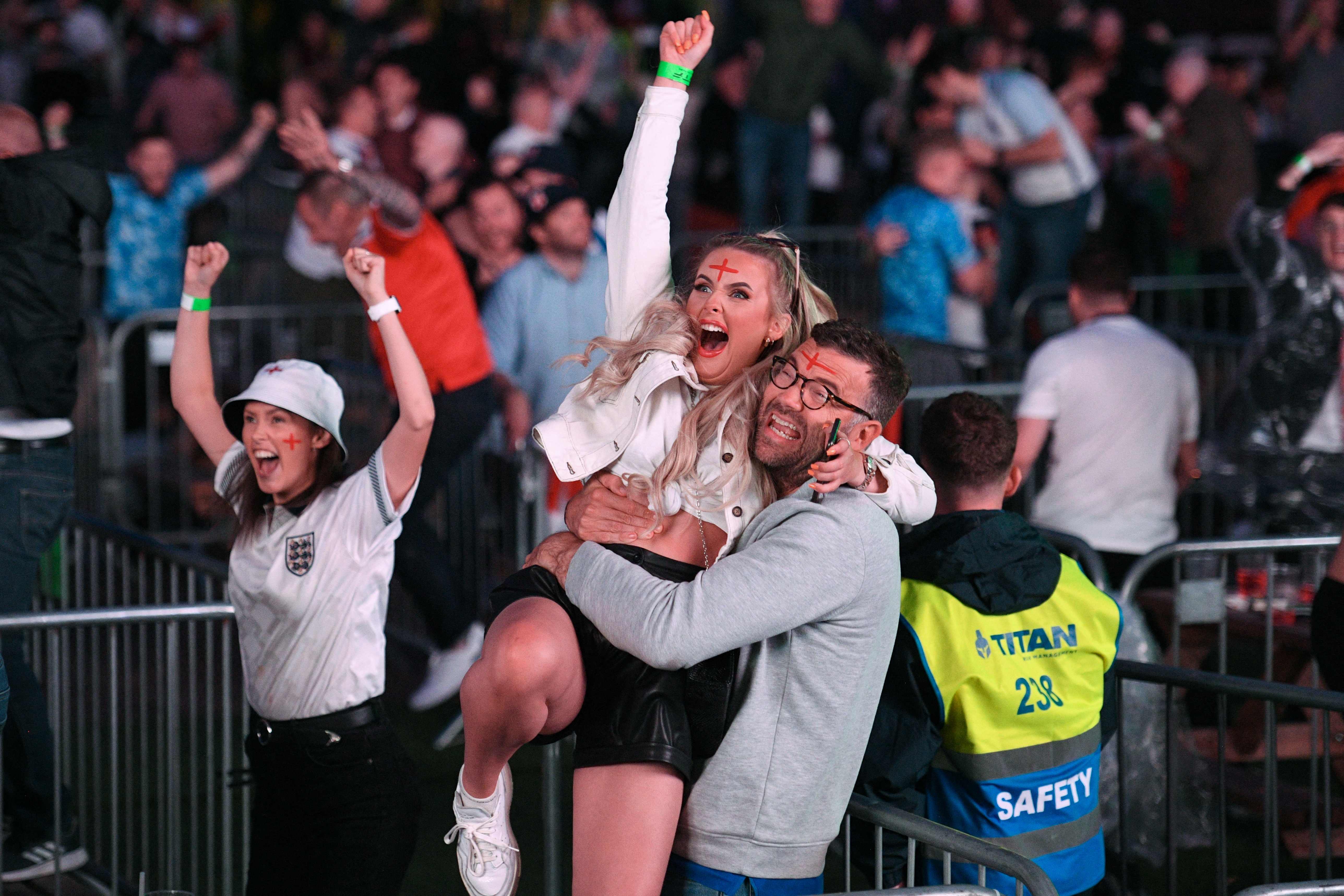 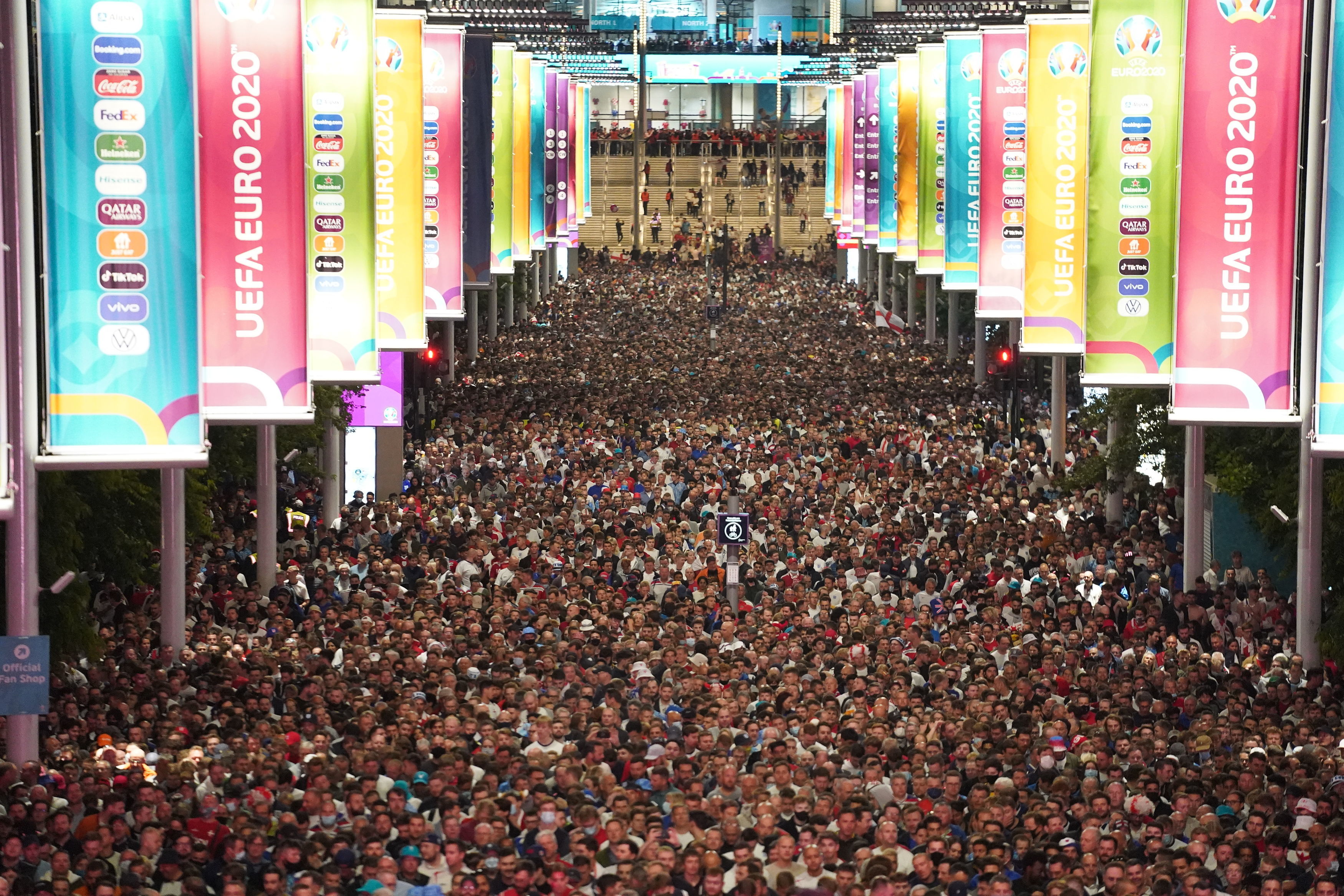 The squad were all present on the touchline, with those not playing hugging and praising the team-mates who played a part.

After a tense 90 minutes, the England squad started up on the pitch again for a further half an hour of play.

In the first few minutes, the Three Lions continued to drive forward – but missed the opportunity to whack the ball in the back of the net.

And in the 12th minute of extra time, Sterling went crashing to the ground in the penalty box – granting England a PENALTY.

Harry Kane's shot was caught by the keeper – but he smashed the ball into the net with the rebound – putting England in the lead.

The Three Lions slowed the pace down in the final few minutes of extra time, as a victory and place in the final was in sight.

Fans then stormed bars and pubs following as the lads reigned victorious.

Countless pints were hurled into the air as fans embraced and cheered.

England will now take on Italy in the historic Euros final on Sunday – the first time the team has reached a final since 1966.

Paddy McGuinness to replace Sue Barker on A Question of Sport