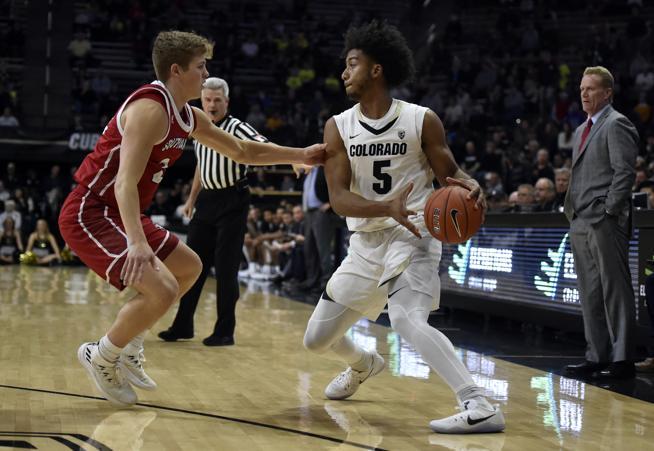 Like any coach that has been plying his trade as long as Tad Boyle, the leader of the Colorado men’s basketball team has a handful of go-to motivational sermons he often delivers to the Buffaloes.

One of those tenets revolves around the idea of cherishing every opportunity life presents on the floor and off. Not everyone in the world gets to play Division I basketball. For those that do, the chances to compete for league titles and NCAA Tournament berths are few and fleeting.

Boyle, of course, is staunch in this conviction. Yet often it is difficult to get college students to see the world with that sort of big-picture view. Unless you’re a player like Dallas Walton, who has battled back from three ACL injuries since his sophomore year of high school, or Evan Battey, who nearly had his career derailed by a stroke during his freshman year at CU, understanding there is a finite allotment of the opportunities the game affords is wisdom difficult to impart.

Already reeling from a five-game losing streak that dimmed some of the luster of an otherwise standout season, the Buffs’ chance at redemption with a likely NCAA Tournament berth was erased when the onset of the COVID-19 pandemic prompted the cancellation of the tournament.

On Wednesday, the Buffs return to the floor for the first time since leaving Las Vegas on the heels of that announcement as well as a listless loss against Washington State in the first round of the Pac-12 Conference tournament. The first official preseason practice of the 2020-21 season will bring together a new-look Buffs team that, to a man, knows nothing in the pandemic era of college basketball can be taken for granted.

“It’s funny, when I say ‘Cherish the moment, appreciate every day and every opportunity,’ the only guys that seem to take that to heart are guys that have been injured and have had basketball taken away from them,” Boyle said. “Guys like Evan Battey or Dallas Walton. I think those guys really get it. The guys who’ve never really been hurt or never had it taken away from them, they hear you but I’m not quite sure they understand you.

The Buffs will hit the floor with three veterans leading the way — Battey, McKinley Wright IV, and D’Shawn Schwartz — on a roster that has endured a significant overhaul from last season’s 21-11 squad. That includes four true freshmen, all of whom Boyle believes can make immediate contributions, as well as redshirt freshman guard Keeshawn Barthelemy and forward Jeriah Horne, a graduate transfer from Tulsa.

Granted, many of those faces weren’t part of the mix when the Buffs limped into the abrupt end of last season. Yet when Boyle reviews what happened down the stretch, it is another reminder that, as has been the case throughout his previous 10 seasons at CU, his program needs to rely on defense and rebounding above all else.

“All you have to do is look at the shooting numbers over the last five games. They were pretty glaring in terms of where we were before that,” Boyle said. “It goes back to hanging your hat night in and night out on your defense and rebounding, and relying on those things to keep you in games and hopefully help you win games on nights you’re not shooting well. Hopefully we won’t go through a five-game stretch like we did at the end of last year at any time this year. But if we do, I’m hopeful it will not affect our confidence like it did last year.

“Because I think some guys, their confidence was shaking. And it sure as hell should not affect our effort and our energy, which I think started. Especially that last game in Vegas against Washington State. It was like we needed a blood transfusion from an energy standpoint.”

8 Drops You Don't Want to Miss This Week