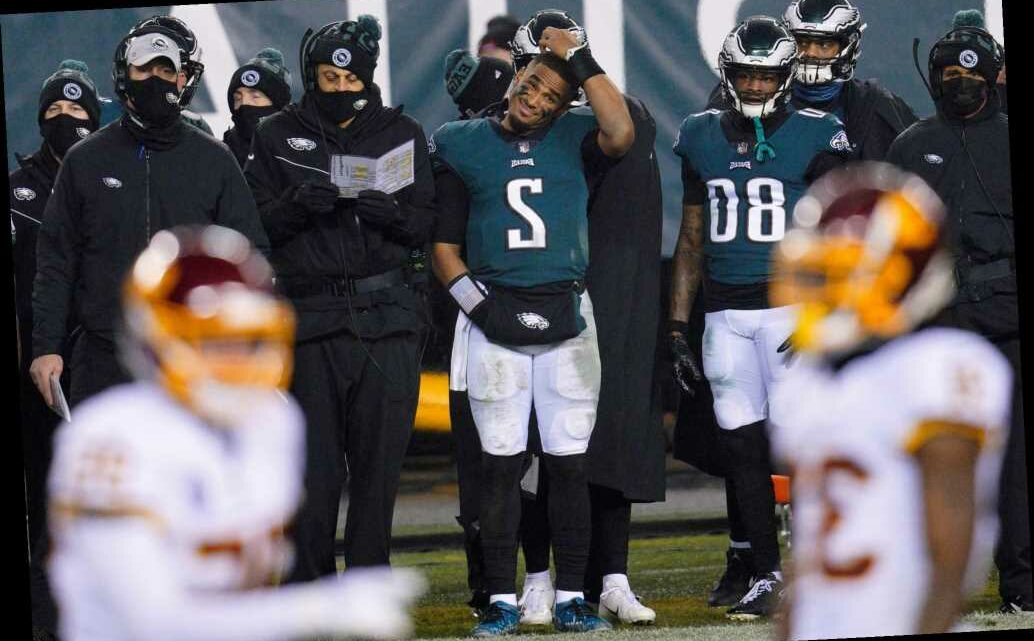 We lost so many sports legends in 2020

A funny thing happened to the Knicks on this night

Rushed start to season taking a toll on Knicks, NBA

The Knicks needed this unexpected demolition

So this is how the wretched tale of the 2020 NFC East ends:

The Giants take it to one of their two fiercest rivals, eking out a 23-19 win over the hated Cowboys. Against every fiber of their being, against every grain of their blue-tinted soul, they commended their football season over to the Eagles, who, if they aren’t 1A on the list of Giants fans’ most wanted, are certainly 1B.

But they needed the Eagles to upset 1C — the Washington Football Team.

“I won’t be caught dead in an Eagles hat,” Giants receiver Sterling Shepard had said around 5 o’clock, “but I’ll be rooting for them.”

And yet who in their right mind could know that 6 ½ hours later, the Eagles — who, let’s be honest, through the years have probably inspired more fits of sheer rage out of Giants fans than the Cowboys and WFT combined — would become even more detested, more reviled, more loathed, more despised than ever.

First, down three points in the third quarter, Eagles coach Doug Pederson eschewed a chip-shot game-tying field goal for fourth-and-goal from the four.

Not literally. But instead of watching how his intriguing young quarterback, Jalen Hurts, might react to playing in the fourth quarter of a meaningful game — meaningful for the WFT, anyway — he brought in his third-string quarterback, fellow named Nate Sudfeld.

If you’d never heard of Nate Sudfeld before, you weren’t alone.

Only for now his name will roll off the tongue around here: Nate #@#$&# Sudfeld.

Sudfeld did what you’d imagine Sudfeld would do. He threw a pick. He fumbled the ball. He looked every bit the non-prospect with 26 career passing attempts under his belt would look like. The Eagles took a knee with a full quarter to go. Washington won the game, 20-14, and the NFC East with a 7-9 record, and host Tom Brady next week.

Look, they had 16 weeks before this one to make sure they could finish better than 6-10. Outside New York there will be few tears shed for them. And look: it isn’t on the Eagles to make the Giants feel good about themselves. It’s just not.

“Why on God’s green earth is Jalen Hurts not in the game?” tweeted Darius Slayton.

Tweeted Golden Tate: “I think the Eagles just hate us more than Washington.”

It was weird enough how the Giants’ own game had ended, with a football on the ground, with a season reduced to the random bounces of an oblong brown missile. Of course that game couldn’t end routinely, same as the season was never going to end routinely, this Giants season that felt like about five different seasons rolled into one.

Wayne Gallman made a splendid play, passing the first-down marker, and that should have been game, set, match, and allowed the Giants to all slip into their fuzzy Eagles socks for a few hours.

Of course that wasn’t possible. Of course the ball slipped out of Gallman’s hands, and landed on the turf, and even though it did look like Gallman had landed on the ball — landed on it on his butt (OF COURSE!) — there was a particularly nervous moment when one official pointed that it was Giants ball and another said it was Cowboys ball.

“I wanted to slap Wayne in the back of the head for fumbling,” Giants safety Logan Ryan would quip a bit later, “but he got the ball back.”

“I’m sorry I caused so much drama,” Gallman would say.

He had no idea what kind of drama was still to come.

When these Giants were 0-5 and 1-7, they would’ve all offered their kingdom for a little good drama, for some season-defining drama, as opposed to the will-the-darkness-ever-dissipate drama that had followed them into this season. Drama? After a terrible start, after a sublime middle, after a brutal last few weeks, they could stomach a little more drama.

And would tolerate the drama to come, too, once they’d taken care of their end of the bargain Sunday afternoon. They dismissed the Cowboys, and while coach Joe Judge and most of the Giants players haven’t lived with the shadow of the Damned Star as long as some others in the organization, that made this a little extra sweet.

“There were a lot of smiles and hugs — socially distanced hugs — in the locker room afterward,” Judge said, and you have to believe the loudest and the happiest of the greeters was John Mara, the Giants’ co-owner, who has lived and died with these Giants-Cowboys games for the better part of 60 years.

“We came in today and we had a meaningful game,” Judge said, “and the guys took care of business.”

They took care of business, and then they had to wait. And they probably wouldn’t have believed you if you’d told them how it would all play out at the end of that wait. Because how could they? How could anyone?