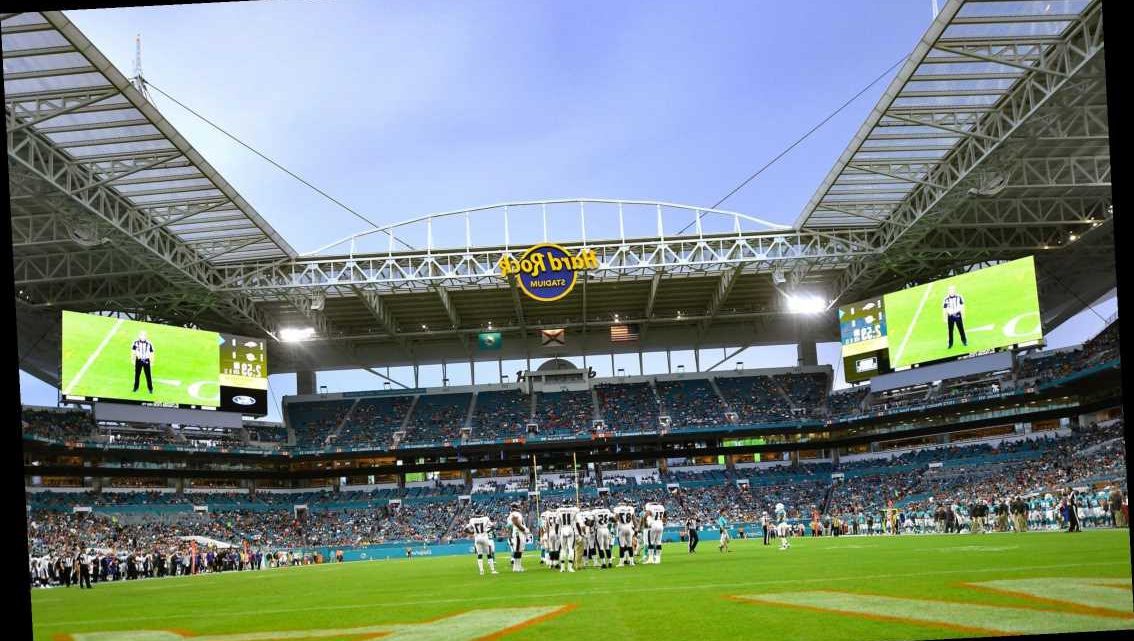 The NFL 2020 schedule is going to be released on Thursday, and one team already has come up with a plan for having fans in attendance.

The Miami Dolphins unveiled a plan Monday of having 15,000 fans in attendance for a game at Hard Rock Stadium which has a capacity of 65,000.

Dolphins CEO/president Tom Garfinkel displayed mock-ups of new entrances into the stadium that would help people adhere to social distancing guidelines, during a Monday segment of “Good Morning America.”

“We would have times to come in for security at different gates so people would be separated out, in terms of when they enter the stadium,” Dolphins CEO/president Tom Garfinkel said Monday in an interview on “GMA”, per ESPN. “We would exit the stadium much like a church environment, where each row exits so people aren’t filing out all at the same time in a herd.”

The display showed colored spots on the ground leading up to the entrance gates to designate the proper social distancing fans need to have as they enter the stadium. Supermarkets and restaurants implementing takeout orders already have put similar processes in place.

Though the NFL hasn’t come up with a fan-attendance plan or committed to having fans at games at all, Garfinkel said the Dolphins wanted to have a plan in place if approval comes in the future. He also said all fans will have to wear masks, adding they also would have to order food from their seats then go upstairs to pick it up, rather than waiting in line.

The Dolphins’ plan already received approval from one agency that works on these matters and that paves the way for Hard Rock Stadium to reopen when the government and the NFL give clearance for fan attendance at games. The stadium became the first public facility to earn the Global Biorisk Advisory Council’s STAR accreditation, the standard used for facilities to implement cleaning, disinfecting and infectious disease prevention work practices to control risks involved with infectious agents like the coronavirus.

The Global Biorisk Advisory Council is a division of ISSA, a worldwide trade association for the cleaning industry.

“When our fans, players and staff are able to return to Hard Rock Stadium, we want them to have peace of mind that we’re doing everything we can to create the safest and healthiest environment possible,” Garfinkel said. “We didn’t want to create our own standard, we wanted to be accountable to the most credible third-party standard that exists. Working with the GBAC ensures compliances with critical guidelines for the highest standard of cleanliness and it is our hope that other venues will follow suit as we navigate through these unprecedented times.”

The NFL is still planning to begin its season on Sept. 10 as originally scheduled, but it has discussed contingency plans such as pushing the season back to October. The Super Bowl is slated to be held on Feb. 7 in Tampa, Fla.