Home » Sport » Do the Giants Have Ailurophobia? A Black Cat Turns a Game Sour 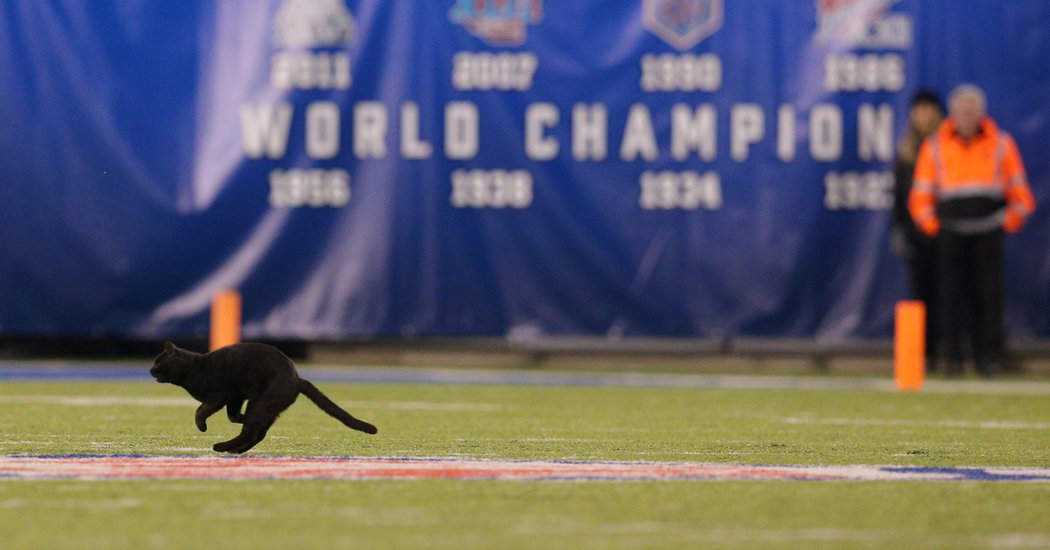 Do the Giants Have Ailurophobia? A Black Cat Turns a Game Sour

The Giants intercepted the first Dallas Cowboys pass of the game just seconds after the opening kickoff on Monday night, which seemed like a good sign for a persistently downtrodden team. Then, in the second quarter, another omen.

With the Giants leading by 6 points, a black cat trotted from a MetLife Stadium tunnel, dashed up the sideline and darkly stared down the Cowboys bench from a few yards away.

The cat then took a lengthy tour of the field, holding up the game while ignoring or spurning pleas from beckoning security personnel as cat owners in the grandstand no doubt nodded knowingly. When it had enough, the cat returned to the shadowy tunnel whence it came.

But in another lost Giants season — they’ve had one winning season since 2012 — it turned out that the black cat materialized to vex the home team. In the final minutes of the first half, minutes after the cat’s appearance, the suddenly rejuvenated Cowboys charged past the Giants to take a lead they never relinquished in a thorough 37-18 drubbing.

Afterward, the Giants (2-7), who committed three turnovers, stood in their locker room offering semi-dazed explanations for what went wrong. Down a corridor beneath the MetLife Stadium grandstand, Dallas owner Jerry Jones had the Cheshire cat grin.

“There’s the cage over there for my cat,” he quipped as he pointed along the hallway. “He was so mean, I didn’t even want to look at him. Things did kind of change when that black cat came.”

Four days after Halloween, the entire episode seemed to have both teams unnerved.

Cowboys running back Ezekiel Elliott was the star of the game, rushing for 139 yards, but when asked about the cat, he winced: “Black cat? Stay away, I wanted none of that.”

His counterpart on the Giants, Saquon Barkley, called the cat’s appearance, “a first,” then added: “What I didn’t like is, we were going good and it stopped us. How did a black cat get on the field?”

The Giants, losers of five successive games, 10 of their last 12 and 18 of their last 25, should be familiar with unpredictable and untimely results by now.

The game restored a measure of order to the N.F.C. East, with the Cowboys (5-3) winning a second consecutive game after a numbing three-game losing streak foiled the team’s 3-0 start to the season. Dallas had its untidy moments on Monday, but quarterback Dak Prescott recovered from his game-opening interception to throw three touchdown passes, including a 45-yard completion to wide receiver Amari Cooper that stalled a late Giants rally midway through the fourth quarter.

“We were kind of waiting to break that one,” Cooper said afterward.

The Giants’ downfall had a familiar look: Four times they were inside the Cowboys 20-yard line and settled for a field goal, the pass rush did not produce a sack and rookie quarterback Daniel Jones fumbled twice and threw a costly interception.

In the final meaningful play of the game, Jones was sacked and lost his grip on the football, which was scooped up by Dallas cornerback Jourdan Lewis and returned for a touchdown.

Jones is now responsible for 15 turnovers in his six starts. Giants Coach Pat Shurmur was asked if it concerned him that the conversation every recent week seemed to be about Jones’s ball security issues.

“Not every week,” Shurmur answered. “Obviously, this week he fumbled, right? Then he got hit in the pocket and he fumbled. Threw an interception. They are isolated incidents.”

As much as the black cat’s startling appearance got most of the postgame attention — “Man, it was pretty funny,” said Giants safety Jabrill Peppers — some of the Giants’ decision-making in their final possession of the first half certainly contributed substantially to the eventual outcome.

The Giants had a 12-10 lead when they took possession with 48 seconds left in the half. Rather than run the football and force the Cowboys to use any of their three remaining timeouts, the Giants threw three consecutive passes. The first two were incomplete and the last was a deep throw from Jones into double coverage, a poor decision made all the worse when Dallas’s Xavier Woods intercepted the pass and returned it 29 yards to the Giants 39-yard line.

The Cowboys advanced the ball five yards and took the lead with a 52-yard Brett Maher field goal as the second quarter expired.

“We started off a little inconsistent,” said Dallas Coach Jason Garrett, “but we kept at it and worked to find our footing late in that first half.”

Jones, however, was having none of it. He knew the real catalyst for the comeback.

“I haven’t seen one glare at me from that far away before,” Jones said of the black cat. “I know he was looking at me the whole time he was out there.”

Sober Tours: How to Hit the Road and Stay on the Wagon