Home » Sport » Do any of NFL’s seven 6-6 teams have real hope? Ranking their playoff viability 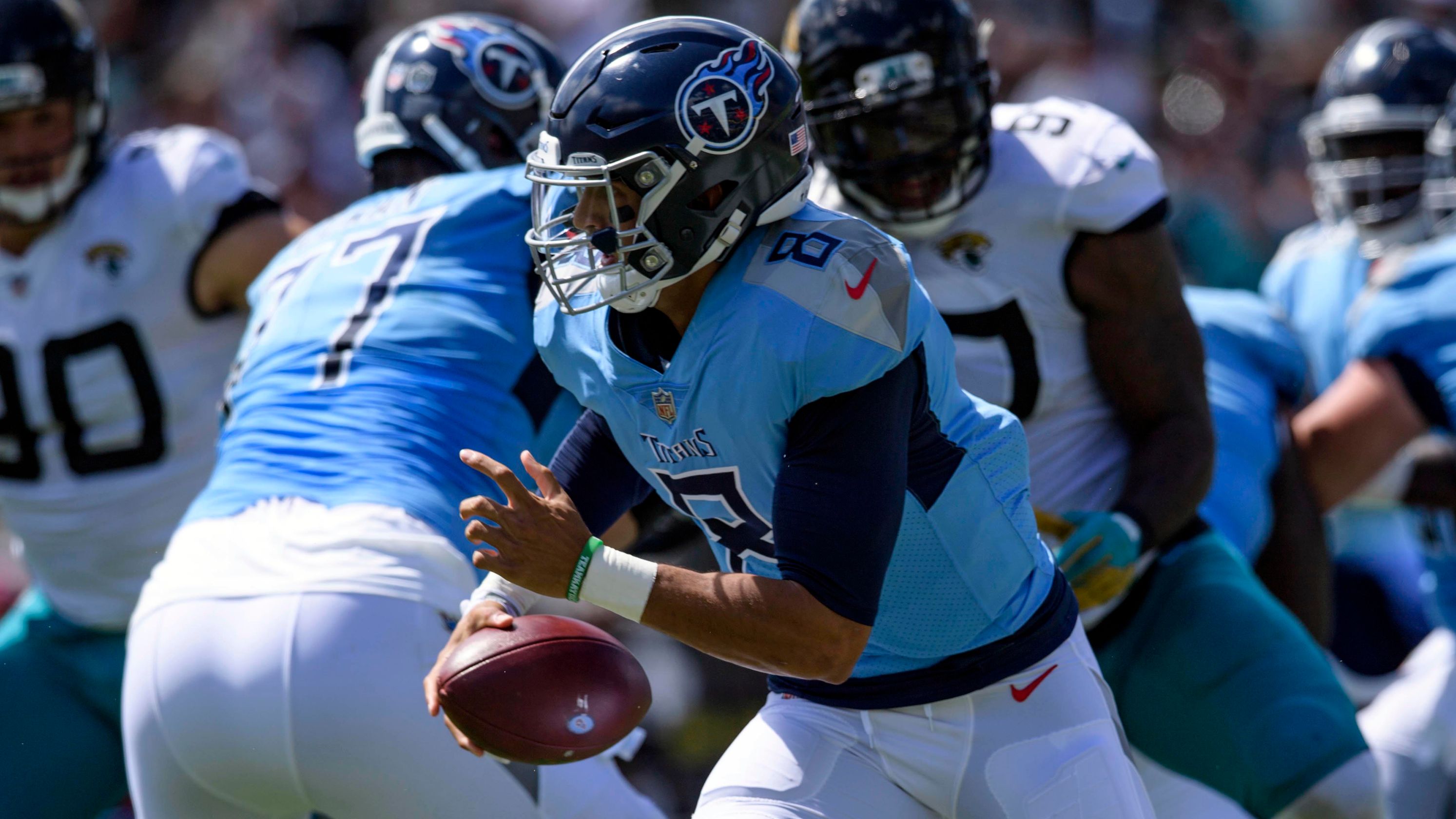 Do any of NFL’s seven 6-6 teams have real hope? Ranking their playoff viability

When the NFL's schedule makers slotted Jaguars at Titans into Thursday's prime-time slot back in April, this obviously wasn't the matchup they envisioned — a contest of seemingly average-at-best squads clinging to the postseason periphery … though, in the Jags' case, they stopped clinging some time ago.

Yet this game is a microcosm of the current scrum of teams scrapping for relevance, whether as late-season spoilers or last-minute playoff entries. And "average at best" seems quite apropos this week given nearly one quarter of the league's clubs, including the Titans, are currently mired at 6-6.

“We don’t have any time to sit here and waste,” Tennessee coach Mike Vrabel said Monday as his players began accelerated preparations for Jacksonville.

His Titans, and those clustered around them in the standings, indeed have little time and no more opportunities to squander if they want this season to be memorable instead of forgettable.

Here's a look at all seven .500 teams, ranked from worst to best in terms of their postseason potential.

Glass half full: Among the break-even NFC outfits, they have the easiest remaining schedule — the Giants at home, followed by trips to Jacksonville and Nashville before the Eagles visit FedEx Field for the regular-season finale. Even at 33, Adrian Peterson literally isn't slowing down, evidenced by his 90-yard TD run Monday. But he needs more than nine carries. The 'Skins are 0-2 against AFC teams, but those are the ideal games to lose once tiebreakers shake out.

Glass half empty: They haven't won since Alex Smith went down and, barring a miraculous recovery by Colt McCoy, are down to Mark Sanchez and Josh Johnson in the quarterback room. The offense was pedestrian even with Smith, but now it's in danger of grinding to a halt. Worse, the defense has cratered. Since November dawned, it's allowed an average of 430.4 yards, as well as 30 points per game in four losses over that period.

Glass half full: They have a 5-4 mark in AFC games; none of the other 6-6 teams in the conference is better than .500 in that category, a potentially key tiebreaker consideration. QB Ryan Tannehill has been back for two weeks and playing with quiet efficiency. The Fins have won four of five at home against the Patriots but really need to beat them Sunday to launch a viable wild-card drive.

Glass half empty: Nobody on this team scares you. Antiquated Frank Gore is probably Miami's MVP, not exactly an uplifting development. After a 3-0 start, the Dolphins have lost six of nine, with the defense allowing at least 27 points and 400 yards in five of those games. With the Chargers having already banked nine wins, the AFC's 6-6 teams are all basically fighting for the conference's second wild card given none are a threat to win their respective divisions.

Glass half full: Before Sunday's clunker against the Jags, Andrew Luck had fought his way into the MVP conversation, Indy's offense averaging 34.6 points during a five-game winning streak. First-year coach Frank Reich is a gutsy play caller and must continue to be if his club is going to forge another hot streak. Rookie LB Darius Leonard is becoming a star on a defense that's quietly blossomed into a top-10 unit. The Colts have at least one takeaway in every game.

Glass half empty: They just laid a potentially lethal egg in that 6-0 loss to Jacksonville and must rebound quickly given they'll face the league's hottest teams, Houston and Dallas, the next two weeks. WR T.Y. Hilton and TE Eric Ebron are nursing injuries that prevented them from practicing Wednesday. The offense has gotten sloppy the last two weeks, committing five turnovers.

Glass half full: They could reasonably run the table. The Titans' final four games are against the Jags, Giants, Redskins and Colts, all save one (New York) to be played at Nissan Stadium. Marcus Mariota finally seems reasonably healthy and is playing far better since the Week 8 bye, posting a gaudy 114.9 passer rating in a span that's included three wins in five weeks.

Glass half empty: A defense once surrendering the fewest points in the league has slipped to sixth in that department. Tennessee has permitted 94 points over the past three weeks. Also, not enough momentum-shifting plays from a group that's generated just 10 takeaways and 29 sacks. Mariota's surge aside, the offense continues to underwhelm overall and has left Vrabel experimenting with O-line combinations.

Glass half full: Former MVP Cam Newton may be having his best season — just ask him — though questions arose about his shoulder in the aftermath of his four-INT performance Sunday in Tampa. Elsewhere, LB Luke Kuechly is good as ever, and Christian McCaffrey has developed into one of the league's premier backs and could become just the third ever to have 1,000 rushing and receiving yards in the same season. Wins over the Cowboys and Eagles could help in the tiebreaking department. The Panthers are out of the division race but, unlike the AFC teams, part of a mix where both wild cards are still up in the air.

Glass half empty: They're in a rut that's hard to explain — though coach "Riverboat Ron" Rivera seems to think it has more to do with his now-altered defensive staff than some of his own questionable gambles. In fairness, the secondary has been laughably bad lately, and Carolina has just one takeaway during a losing streak that's reached four weeks. Maybe Rivera's decision to assume the play calling will turn out better than, say, going for two points and the win in Detroit last month. TE Greg Olsen was lost to yet another foot injury. Losses to the Redskins and Seahawks could be penal … though may also be irrelevant given the Panthers must still face the Saints twice.

Glass half full: Beating the Giants and depleted Redskins hardly puts the reigning champs in high cotton, but they are now in the midst of their first "winning streak" of 2018. The long-dormant running game has awakened with rookie bruiser Josh Adams teaming with Darren Sproles, whose hamstring is allowing him to play at last. WR Golden Tate finally had a breakout game with his new team after three invisible weeks. And, unlike Carolina, the Eagles are in play for both the NFC East crown and a wild card.

Glass half empty: Even if Philly wins in Dallas on Sunday and pulls into a tie atop the division, the schedule subsequently serves up the Rams and Texans. Dates with Ezekiel Elliott, Todd Gurley and even Lamar Miller loom as very problematic for a run defense that's gone to pieces in the second half of the season. A loss to the Panthers in Week 7 could come back to haunt them.

Glass half full: They've caught fire at the right time, winning three straight — a streak that could billow into a full-on blaze given Denver's next three opponents are the 49ers, Browns and Raiders. Even a Week 17 date with the Chargers has significant potential to be meaningless to the Bolts, barring a collapse, unless the AFC West is still at stake on the final day of the regular season. The training wheels are off rookie Bradley Chubb, who now forms half of the league's most potent pass rush tandem opposite Von Miller. After a Rocky Mountain start, QB Case Keenum is turnover-free the past four games, helped largely by the performance of rookie Phillip Lindsay, now the AFC's No. 1 rusher. And there's certainly a solid opportunity to catch the Ravens (7-5), who currently hold the AFC's second wild card but also have upcoming road trips to Kansas City and Los Angeles to face the Chargers.

Glass half empty: CB Chris Harris broke his leg Sunday but could eventually return. The news wasn't nearly as good for WR Emmanuel Sanders, who suffered a torn Achilles in practice. The decision to offload Demaryius Thomas at the trade deadline could come back to haunt GM John Elway. Keenum must now get by with a highly inexperienced trio of wideouts (Courtland Sutton, Tim Patrick, DaeSean Hamilton), which is unlikely to deter defenses from trying to gang up on Lindsay.