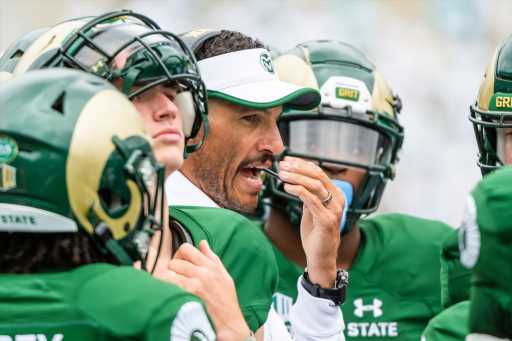 FORT COLLINS — There are many words that could be used to describe the start of the Jay Norvell era in Fort Collins.

Just don’t call it a comeback.

Colorado State came out flat in Saturday’s home opener at Canvas Stadium, the first for its new coach. The Rams fell into a 34-point hole that was too deep to dig out of in a 34-19 loss to Middle Tennessee that brought out the boo birds and sent many fans headed for the exits well before a spirited Rams rally fell short.

Freshman quarterback Clay Millen and junior receiver Tory Horton hooked up for three touchdown passes in the third quarter, but it wasn’t nearly enough to overcome the mess that preceded it.

The bad vibes started on the very first play when Millen threw an errant pass that fluttered into safety Tra Fluellen’s hands for a 32-yard pick-six just nine seconds into the game.

Things didn’t get much better immediately after that on a cool, gray September afternoon that offered little sunshine until it was way too late for the Rams to avoid their seventh consecutive loss.

The student section on the east side of Canvas Stadium was nearly full by the 2 p.m. kickoff, but the rest of the lower bowl was sparsely filled with 27,641 in attendance — a far cry from the 109,575 who watched CSU lose 51-7 to Michigan in the Big House just a week before.

Of course, the opponent wasn’t quite as sexy as the Maize and Blue. But the Blue Raiders, themselves 44-7 losers to Todd Centeio and James Madison last week, were nearly as dominant early on.

The Rams managed just one drive into MTSU territory in the first half, and that resulted in an A’Jon Vivens fumble at the 6-yard line on a third-and-5 draw play. The boos began raining down from the stands after a third-and-long draw play left the Rams with just 18 total yards at the end of their fourth possession … and returned after another CSU three-and-out netted minus-six yards.

MTSU finally scored its first offensive touchdown on the ensuing drive, aided by a roughing-the-passer flag on third-and-goal from defensive end C.J. Onyechi. Two snaps after the penalty, Frank Peasant scored on a spinning one-yard run up the gut to go up 17-0.

After another MTSU drive resulted in a field goal, Blue Raiders linebacker Christian Dixon got a free run at Millen’s blind side on third-and-long and dropped him for a strip sack at the CSU 18. Two plays later, Peasant found the end zone again from 10 yards out for a 27-0 lead going into the half.

The student section that was once nearly filled was all but empty when the teams came back out for the second half. And it appeared to be the right decision after MTSU scored on its first drive to go up 34-0.

That’s when the Rams came alive.

The rally started innocently enough with Millen uncorking a 48-yard pass that landed in Tory Horton’s lap for a touchdown. The two hooked up again on a 69-yard pitch-and-catch on the next possession, then one more time from 17 yards out at the end of a seven-play, 36-yard march that began with Mohamed Kamara’s fumble recovery.

CSU safety Jack Howell secured another turnover after Chase Cunningham’s deep pass bounced off the intended receiver’s helmet and into Howell’s hands for an interception. But the succeeding CSU drive stalled out at the MTSU 26, and kicker Cayden Camper missed from 43 yards.