Home » Sport » Dave Logan, optimistic there will be football this fall, talks Cherry Creek and Broncos 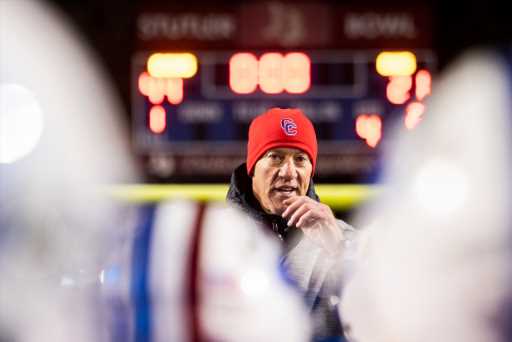 Dave Logan, optimistic there will be football this fall, talks Cherry Creek and Broncos

As the NBA, MLB and NHL attempt to navigate the complex logistics of a return-to-play amid the coronavirus pandemic, time remains on football’s side.

To that end, Cherry Creek coach and Broncos play-by-play broadcaster Dave Logan remains cautiously optimistic that he’ll be working as regularly scheduled on Fridays and Sundays this fall.

“I definitely feel like we’re going to have football,” Logan said. “The state has been smart about how it has started the re-opening process… It certainly bears watching what’s going on with the start of some of these professional sports, and seeing how they navigate through the (health and safety) logistics. But the reality is, for the football season, we’ve got two-plus months to prepare and also sit back and evaluate (the feasibility) on a daily basis.”

At the prep level, CHSAA’s Resocialization Task Force’s June 4 report classified football as “higher risk,” and the association stated at that point it was not able to move forward with moderate or high-risk sports. Two days later, commissioner Rhonda Blanford-Green tweeted that CHSAA would “begin constructing safety and implementation guidelines to resume ‘ALL’ athletics and activities including football beginning this fall.”

Now, amid concerns about a resurgence of coronavirus, CHSAA’s latest update vowed to proceed “with guidelines and standards for resuming fall sports on their scheduled start dates” with health and safety concerns at the forefront.

During the summer, limitations on team workouts have been mandated at the district level after spring football was canceled across the state. At Cherry Creek, Logan’s Bruins are in their second week of voluntary workouts — sans the use of footballs and the weight room. So, it’s essentially conditioning and team building for the defending Class 5A state champions, while remaining six feet apart.

“The whole idea of putting players into a position where they can play fast and don’t have to think a lot — that’s going to be a challenge this year given where we are and a lot of of the (interaction) rules that are in place,” Logan said. “As we work our way through this process — and obviously there are plenty of distractions — the reality is, the teams that handle these distractions and do the best job of focusing on the process no matter what that process is… those teams are going to have a leg up to start the season.”

The 65-year-old Logan knows his Bruins need to be one of those teams as they continue to prepare for the 2020 opener against Doherty on Aug. 28 at Stutler Bowl, should the season begin on time.

“It’s hard enough to win a state championship, but then to repeat, that’s a whole other thing,” said Logan, who has won eight titles overall, including three straight at Mullen from 2008-10. “You’ve got to get your team to understand that while we appreciate last year, it’s in the rear-view mirror, and last year’s not going to help us at all in terms of what this season might look like. And we have a bigger bullseye on our back this year.”

This fall will be Logan’s 28th year as a head coach in Colorado, and ninth at Cherry Creek. It will be his 31st year calling Broncos games, and the 850 KOA mainstay believes the high hopes Denver fans hold heading into the season are warranted.

“I liked what I saw from Drew Lock in a small sample size, and what they did with the draft was smart,” Logan said. “They’ve realized now that the game has changed and the team they’ve got to beat is Kansas City. If you look at the weapons the Chiefs have — and of course they have a great young quarterback (in Patrick Mahomes) — they surrounded him in a really smart way.

“Now, just because you’ve got a bunch of guys who are fast, that doesn’t ensure your offense is going to look like the Chiefs. But it gives Drew that many more weapons… It forces the defensive coordinator to decide who that guy is you want to take away. Is it Courtland Sutton? Is it Jerry Jeudy? Is it Noah Fant? The Broncos have many more weapons, at least on paper, than they’ve had the last few years.”

'Married to Medicine LA': Jazmin Johnson Reveals the Real Reason Why Her Husband Won't Be on the Show