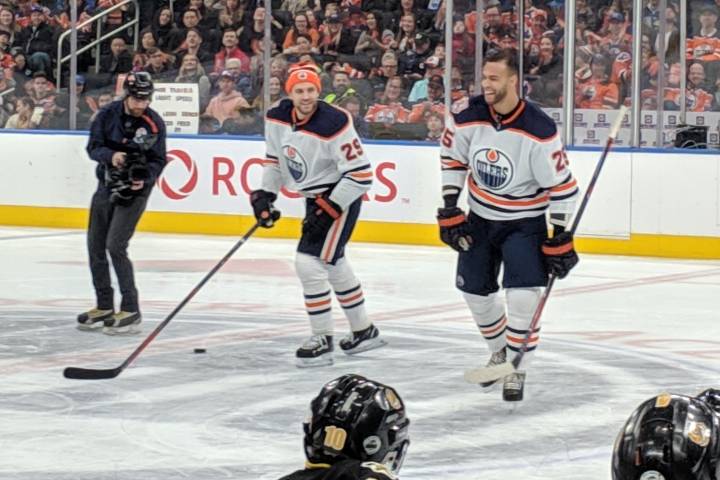 Darnell Nurse had a message for his teammates after winning the Edmonton Oilers’ hardest shot competition.

“I told the guys there will be no passing for the next couple of weeks,” Nurse joked Sunday afternoon after the Edmonton Oilers Skills Competition at Rogers Place.

Nurse pounded a shot at 102.1 miles per hour. He edged out Milan Lucic and Matt Benning, the last two winners of the event. They were both over 100 miles per hour as well.

Edmonton Oilers tie it late and beat Panthers in shootout

“The crowd gets into it. It’s like the 100-metre dash in track. It’s one of those things that catches everyone’s attention and then it’s over fast,” said Nurse.

“I just tried not to fall over,” said Spooner. “And I’m lucky that McDavid wasn’t here.”

Connor McDavid, who missed the competition with an illness, won last year in a time of 13.744.

Ty Rattie cruised to victory in accuracy shooting. He needed only eight seconds to knock out all four targets.

“Just get the first one out the way then the nerves kind of go away,” said Rattie, who finished the event in the minimum of four attempts. “That exceeded my expectations.”

Wyatt Ball from the Strathcona Warriors peewee team was crowned King of the Shootout. The Warriors were the minor hockey team selected to join the Oilers for the skills competition.

Ball, 12, scored on his final shot after Lucic and Benning were stopped.

“I come in, fake a shot, then stick handle, then through the five-hole,” said Ball of his go-to move.

The Oilers will host Buffalo on Monday night.