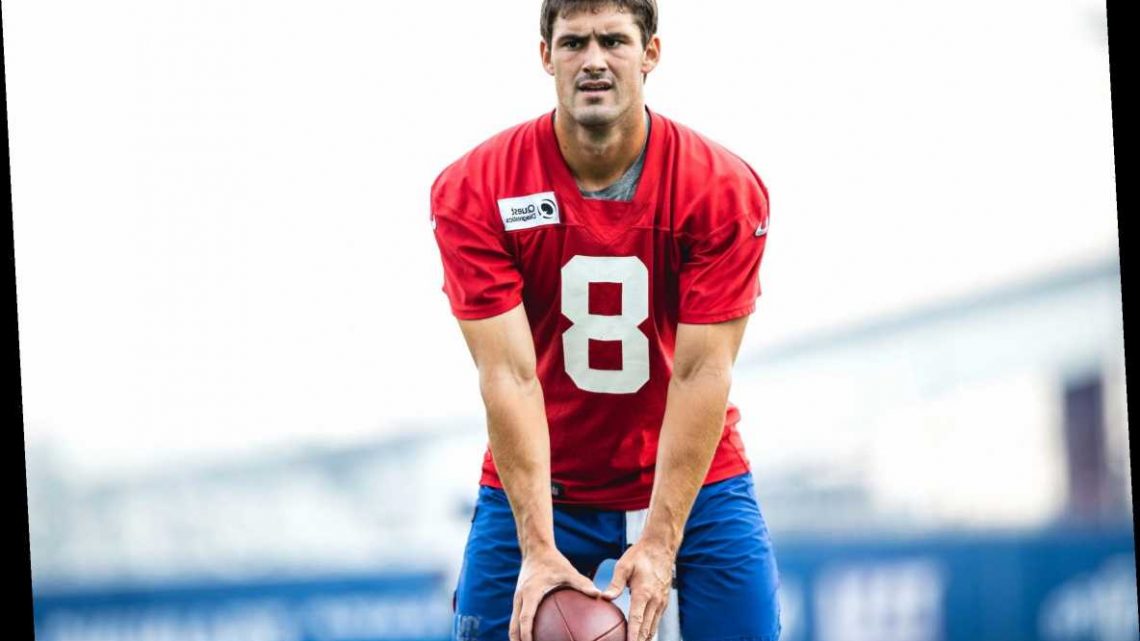 A second-year quarterback entering his first season as the Day 1 starter. A brand new offense to learn. A brand new head coach, offensive coordinator and quarterbacks coach to get to know. No on-field work as a team in the spring. A slow ramp-up of practice time in the summer. The most restrictive training camp the NFL has ever seen. Not a single preseason game to test what you mastered, what you need to work on.

The word that comes to mind to describe the lot in life Daniel Jones finds himself in with the Giants is “unfavorable.’’

These COVID-19-related impediments create so many potential pitfalls for the bulked-up 23-year-old that it is understandable if he feels at least a bit disadvantaged when compared with more experienced quarterbacks around the NFL returning to a familiar staff and offense.

“I don’t think so,’’ Jones said Thursday. “It’s on me to learn the system as quick as I can, as effectively as I can, and use the time we have, use the practice we have to do that, and come in prepared and ready to go.’’

This comment might as well have been scripted by Joe Judge, who thus far has assembled a “no excuses’’ zone around himself, banning any bemoaning about the unprecedented pandemic adjustments required from a first-year head coach.

There is no doubt Jones’ professional life is about as unsettled as it can be. He was able to get on the field for some throwing sessions with his top targets this offseason in Austin, Texas, but those unscripted workouts do not take the place of 10 regimented organized team activities. Jones is navigating his way about the unfamiliar hallways and makeshift meeting rooms at MetLife Stadium as he tries to flatten the learning curve to get himself ready for the scheduled Sept. 14 season opener.

“Obviously no one’s playing preseason, we’re all operating under the same rules, under the same outline as far as practice and then on into the season,’’ Jones said. “All we can do is prepare as well as we can in the time we have and make sure we’re getting the most of every single day.’’

Sure, it is a plus he is familiar with his top receivers, Sterling Shepard, Golden Tate and Darius Slayton, as well as running back Saquon Barkley and tight end Evan Engram.

But there are so many minuses.

Rather than a gradual bonding with Jason Garrett, the former Cowboys head coach hired by Judge as the Giants’ offensive coordinator, Jones has to engage in a sort of distance-dating football courtship, extracting what he can when he can.

“I’ve enjoyed learning from him so far,’’ Jones said of Garrett. “He’s extremely detailed in his teaching and what he expects on the field, that’s probably what’s stood out the most.’’

Judge is not into offering free passes, but he also realizes he cannot evaluate Jones as he would a veteran operating under normal circumstances.

“If it was somebody’s second year in the offense, you would want to see their command of the offense on the field,’’ Judge said. “For Daniel, we have to be fair. It’s a new offense, a new system we have schemed for him. He’s had a limited amount of walk-throughs of actually being on the field to do this. At this point, I am just looking to see his progress day by day and not looking to compare him to where he was last year.’’

Where Jones was last year, from a physical standpoint, is not where he is this year. Jones as a rookie played at 220 pounds. As The Post reported in late June, Jones wanted to add strength and size to his body and used the coronavirus lockdown back home in Charlotte, N.C., to add to his frame.

“I feel good, feel like I’m as strong as I’ve been,’’ Jones said. “I wanted to get stronger, wanted to gain some weight, and I think for what it does to every part of my game, standing in the pocket, running when I need to, obviously throwing the ball as efficiently as I can, using my strength, my lower body, each piece of that was part of the goal this offseason in my training.’’

Jones succeeded in getting bigger. Getting better, with all thrown at him this fractured offseason, is the greater challenge.

Over 1,300 UK jobs axed at Travelex due to Covid-19 and cyber attack