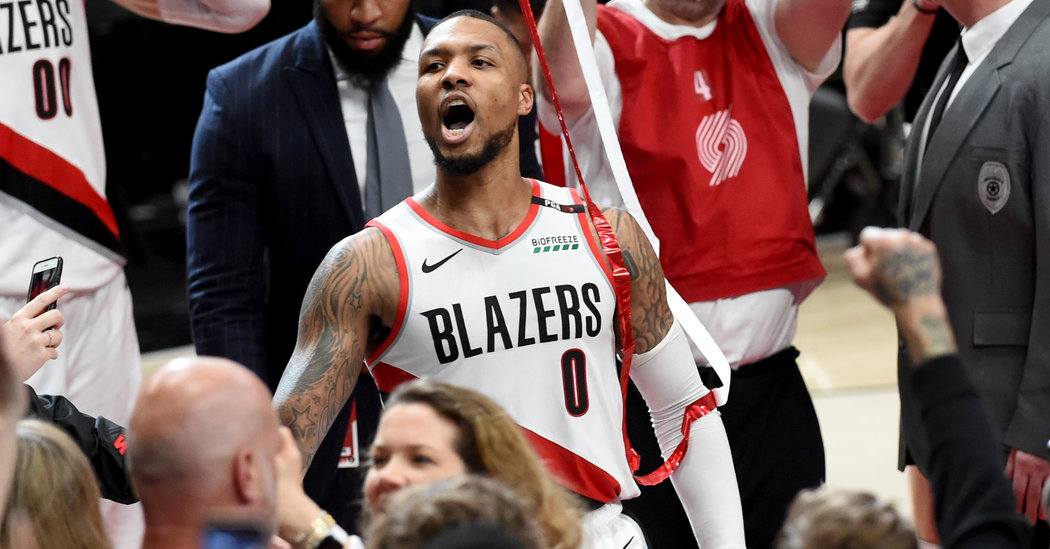 Damian Lillard From 37 Feet … and the Blazers Eliminate the Thunder

PORTLAND, Ore. — Damian Lillard, for so long the rising star of the Portland Trail Blazers, had seen and heard everything in recent days: the taunts, the complaints, the gestures, the boasts. He was not a huge fan of the Oklahoma City Thunder during their first-round playoff series, so he decided to make his biggest statement by not saying anything at all.

After his 37-footer had sailed over the top of Paul George’s outstretched hand and through the basket, Lillard turned toward the Thunder bench — and the backside of Russell Westbrook as he shuffled off the court — and waved goodbye.

It was a gesture so simple and spontaneous, no explanation was necessary. But Lillard offered one anyway.

“I mean, the series was over,” he said once the delirium here had subsided.

⌚️ @Dame_Lillard calls SERIES for the @trailblazers with the stepback triple for 50! #TissotBuzzerBeater #ThisIsYourTime pic.twitter.com/OpMqcrgagP

The Blazers eliminated the Thunder on Tuesday night with a 118-115 victory in Game 5 of the best-of-seven series, and along with the result came the sense that there had been a shift in the N.B.A. landscape. Lillard, 28, and Westbrook, 30, two outstanding point guards with distinct styles, had fueled the drama of this short-lived series, but only Lillard proved capable of carrying his team forward.

“You don’t win a game with one guy, but he certainly was special tonight,” said Terry Stotts, the coach of the Blazers. “He’s in a class of his own.”

On Tuesday, Lillard played the game of his life: 50 points, 7 rebounds, 6 assists and the game-winning 3-pointer from Mount Hood as time expired. For the series, he averaged 33 points and 6 assists while shooting 48.1 percent from 3-point range. The Blazers are now bound for the Western Conference semifinals, where they will face the Denver Nuggets or the San Antonio Spurs.

Portland overcame adversity to reach this point. Last year, the Blazers were swept in the first round by the New Orleans Pelicans. But this is a team that seems newly ascendant behind Lillard, a four-time All-Star who tends to operate with the impassive demeanor of an undertaker. He buried the Thunder.

“In my mind, I just felt like something down the road was going to work out for us if we just stay with it and keep our minds right,” Lillard said. “I think this is the beginning of that.”

The other side of glory arrived at his postgame news conference wearing red sweatpants tucked into his socks, a designer satchel and a baseball cap featuring several Disney cartoon characters who were all smiles. Westbrook, the owner of that hat, planted himself on the dais with a dour expression and said little — this, after he had taunted Lillard earlier in the series by shouting that he was “too small” to defend him. Westbrook, who turns basketball games into performance art, does stuff like that to motivate himself. But it backfired on him.

“I’m very disappointed,” Westbrook said before he embarked on another long off-season. “My process is always looking at myself first, figure out what I could have done better throughout the whole season to put my team in position to be able to win games.”

Westbrook has spent his entire 11-year career with the Thunder, and no one has ever questioned his skills or his loyalty. In the wake of Kevin Durant’s departure for the Golden State Warriors in 2016, Westbrook renewed his vows with Oklahoma City in 2017 by agreeing to a five-year, $205 million contract extension that runs through the 2022-23 season.

It was considered a coup for a small-market franchise that had already lost one intergalactic star and could ill afford to lose another. But Westbrook refused to even dabble with free agency.

Oklahoma City expressed its love in no uncertain terms. The mayor went so far as to declare that, henceforth, every day in the city would be “Russell Westbrook Day.” (Every! Day!) It was all sunny vibes. But since then, the Thunder have made three straight first-round exits — and their latest postseason experience was especially disheartening.

“It’s going to be following us our whole life,” said Dennis Schroder, the Thunder’s backup point guard. “We had an opportunity, I think, with that group — everybody knows that, too — to make something special. But when you look back in three or four or five years, you’re not getting that chance back. For me, it’s sad.”

On Tuesday, Westbrook appeared determined to operate as a facilitator — for a little while, anyway. During one stretch of the first quarter, the Thunder made 10 straight field goals, and Westbrook attempted just two of them. But as Lillard continued to apply pressure, Westbrook began to fire away, reverting to a familiar postseason script: high volume, low efficiency.

It is unclear where the Thunder go from here. Westbrook and George are locked in on expensive long-term deals, giving the franchise little flexibility to build around them. And the spotlight will only intensify on Westbrook in the wake of this series. He tried to win games through force of will (again), and came up empty (again).

After several postseason disappointments of his own, Lillard found a different path — along with an unforgettable shot to drive the message home.

C.J. McCollum, his teammate, recalled the brief conversation he had with Lillard before taking the ball out of bounds on the team’s final possession.

Why Is All of This My Fault? Watch Kristin Cavallari and Jay Cutler Get Candid About Their Marriage Issues