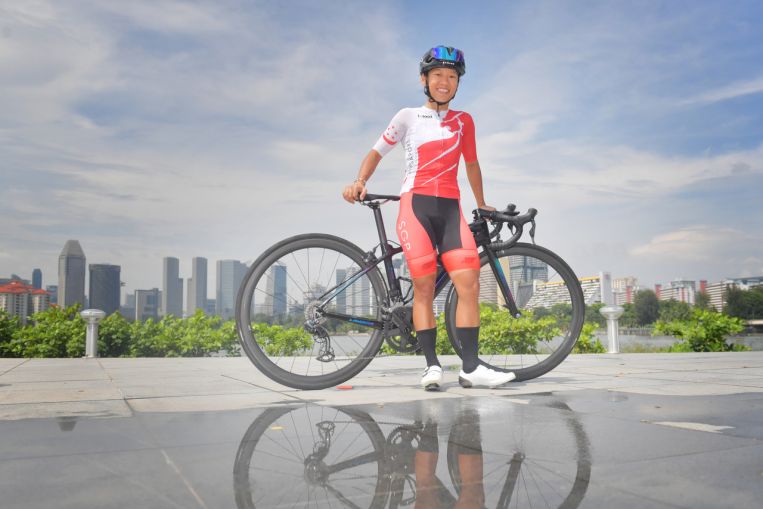 SINGAPORE – In yet another feather in the cap for local cycling, national road cyclist Chelsie Tan has become the first Singaporean to secure a professional contract with a team in Europe.

Tan, 31, will race for Australian professional outfit Team BikeExchange in the International Cycling Union (UCI) Women’s World Tour next year on a one-year contract, the team announced on Thursday (Nov 4).

It has been over two weeks since she received the news but Tan, who joined the national team in 2018, still cannot believe it.

She told The Straits Times: “It still hasn’t sunk in and I’m just speechless actually. But I’m super thrilled and excited to race. I want to be useful to the team and prove that this chance is earned, not given.

“Singapore cycling has been having good news for the past few months so it’s quite promising that Singapore, although we’re such a small dot (on the map), has big opportunities available for us to live big dreams so that the world can see us.”

The inaugural UCI Women’s World Tour started in 2016 and typically kicks off in March each year. This term featured 18 races, while next year’s is set to have 22, including the women’s Tour de France, which returns after a 33-year absence.

Both stints are part of an agreement signed last year by GreenEdge Cycling and the Singapore Cycling Federation (SCF) to provide Singapore’s cyclists, coaches and clubs with engagement opportunities that include the sharing of best practices from Tour de France riders and coaches.

While Tan has not set specific goals, she hopes to learn as much as she can and have fun while hopefully delivering good results for BikeExchange. She is also using the opportunity to prepare for the upcoming Hanoi SEA Games.

With most competitions cancelled or postponed since the pandemic, Tan admitted that it had been difficult to stay motivated so she is thrilled at the prospect of racing regularly again.

In August 2020, she decided to try something new and picked up mountain biking, which helped her regain her competitive drive when she competed in local races.

Tan, whose last international race was the Tour of Phuket in March 2020, said: “It was really fun and thrilling and that was one way I kept myself motivated. I learnt that it’s not always only about road cycling, but more about pushing your performance and fitness to another level using another form of cycling.”

After dislocating her shoulder in a crash during a jungle cross race in May, she decided to focus on road cycling again as she was gunning for the SEA Games.

Her mountain biking stint has been good for road cycling. “Sometimes there are potholes on the road and when you’re in a peloton, everyone is so close to each other. The skills I learnt will help me manoeuvre myself better in the peloton and get through the race safely,” said Tan, who currently works part-time in a bicycle shop.

“Mountain biking also helps with physicality because you use a lot of power especially while manoeuvring through areas with steep, short and bumpy climbs. We need pure power and extra strength to go through them, so it helps you become stronger.”

Tan will be based in Girona, Spain for a year and while she is stressed about living overseas for the first time and settling administrative matters, she said: “This will put me outside of my comfort zone and that’s when I grow. I was warned by Shayne (Bannan, SCF high performance director) that there might be more downs than ups but it’s OK because that’s when people learn and I will just take this chance to experience it and gain the most out of it.”

Bannan, who sent Tan’s training data and footage to BikeExchange, said the stint will help her improve as she will train in an elite environment and will be racing a lot.

The Australian, 59, added: “Chelsie is a determined and committed athlete and it’s a good life experience. We’re also hoping she can bring that experience back here so there’s a mutual benefit for everyone.”

Tan’s family is supportive and her fiance will be with her in Girona for the first few weeks to help her settle in.

Tan hopes her stint will inspire other cyclists, especially young women, to pursue their dreams and represent Singapore or compete on the World Tour.

She said: “This is a good opportunity to show the other development riders that good things are starting to happen for us, so they can be more daring about their dreams. They can now say they want to do something and they know the chance will come because their senior’s done that before.”

'Dancing With the Stars': Derek Hough Reveals Who Is Really Impressing Him This Season (Exclusive)
World News