Home » Sport » CU Buffs vs. UCLA scouting report: Who has the edge, predictions and 3 things to watch 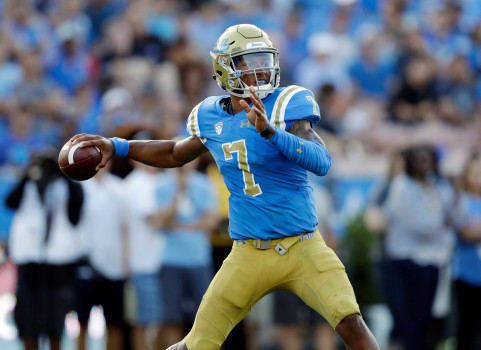 CU Buffs vs. UCLA scouting report: Who has the edge, predictions and 3 things to watch

Who has the edge?

When the Bruins run

UCLA will feature Demetric Felton, a converted wide receiver, as its top running back in 2020. He earned midseason All-American honors a year ago with a school-record four scoring plays of at least 75 yards. CU must prevent chunk yardage. Good thing the Buffs bring back DL Mustafa Johnson and LB Nate Landman — both preseason first-team all-conference selections. This matchup appears to be strength-on-strength. Edge: Even

When the Bruins pass

Dorian Thompson-Robinson has started 18 of the Bruins’ last 24 games. His dual-threat capabilities are well documented with 4,000-plus career passing yards and four rushing touchdowns in 2019. The problem? UCLA has won only five games with Thompson-Robinson as the starter over the previous two seasons. He is mistake-prone and CU needs to capitalize on that. But there is no replacing the value of experience. Edge: Bruins

When the Buffs run

CU’s ground game took a significant blow with the indefinite injury absence of Alex Fontenot, the Buffs’ top rusher from last season (874 yards and 5 touchdowns). CU will turn to running back Jarek Broussard, a redshirt sophomore who missed all of last year, as the starter Saturday. The Buffs also have a stable of other rushers they feel comfortable rotating. UCLA has found little success stopping the run under third-year head coach Chip Kelly. Edge: Even

When the Buffs pass

Senior Sam Noyer makes his first career start at quarterback for CU on Saturday. The former four-star QB recruit switched to safety under Mel Tucker, considered the transfer portal, returned to Boulder and won the starting quarterback job. Noyer has the size (6-4, 220) and tools that figure to add up to success in a Pac-12 offense. But a learning curve is expected. Edge: Bruins

CU’s James Stefanou has proven to be among college football’s top placekickers when healthy. But he’s missed several games in each of the last two seasons with a hip issue. The Buffs will be breaking in a new punter in Josh Watts, another Australian-trained specialist. UCLA will also be featuring a new punter and kicker. Edge: Buffs

After testing the NFL draft waters last spring, receiver K.D. Nixon opted to return to Boulder for his senior season with an eye at improving his stock. With Laviska Shenault Jr. now gone, there should be plenty of opportunities for the former four-star recruit out of DeSoto, Texas, starting with a shaky Bruins defense in Week 1.

Things didn’t end well for first-year CU head coach Karl Dorrell at UCLA, with the former Bruins boss getting shown the door after his fifth season despite posting a 35-27 record in Westwood. As much as the UCLA alum might like to downplay the connection, it sure would be sweet to get win No. 1 in Boulder against UCLA.

Thanks to COVID, the Buffs have already seen two 2020 openers canceled this season, starting with the Rocky Mountain Showdown in Fort Collins (Sept. 5), then followed by a revised opener against Oregon (Sept. 26). Barring disaster, game day is finally here, and it will be the latest CU football opener in 102 years, when CU played Northern Colorado on Nov. 16, 1918, amid the Spanish flu pandemic.

Karl Dorrell says he hasn’t made the UCLA game personal, that he hasn’t underlined it in red. His past players know better. Deep down, his current players do, too. Dorian Thompson-Robinson is a handful, but the Bruins are also breaking in a new kicker. On the road. At altitude.

A new quarterback (Sam Noyer), a new head coach (Dorrell) and only a few weeks of practice to get all the kinks worked out? Sure doesn’t sound like a recipe for success, especially with a three-year starter (Dorian Thompson-Robinson) taking snaps on the other sideline.

The indefinite injury loss of running back Alex Fontenot and a one-game suspension for wide receiver La’Vontae Shenault is poorly timed with CU breaking in a new quarterback in a new system. Expect a slog-fest from both teams as players adjust to game conditions.