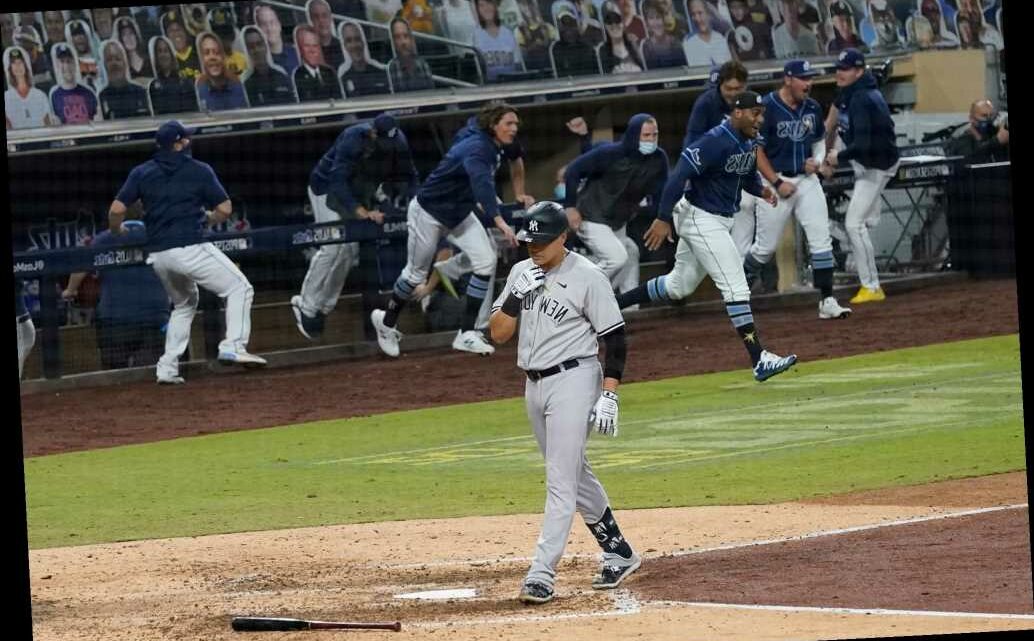 This time, there was nothing nefarious lurking around the batter’s box. Nobody will ever ask if Mike Brosseau had a buzzer attached to his chest. Nobody will ever wonder if someone slammed a garbage can in order to relay what was coming. That was last year. That was Jose Altuve, in a deafening cauldron called Minute Maid Park.

And Brosseau wasn’t going to wave his teammates away after he crushed it, either, wasn’t going to beg them to not rip his jersey off. In the serenity of an empty Petco Park, he was going to let joyous Rays teammates share the moment with him any way they wanted to: hugging, back-slapping, dancing, howling.

And all the Yankees could do was stare.

What a wonderful game this was, this 2-1 Rays victory that clinched a 3-2 win in the best-of-five American League Division Series. You won’t feel that way for a while if you are a Yankees fan, nor should you. In that case this will bookend the way last year ended, and felt, a couple of home-run balls surrendered by the closer, Chapman.

“It’s awful,” Yankees manager Aaron Boone said, barely able to contain his distress. “The ending is cruel, it really is. I’m proud of so many people, proud to work along so many who sacrificed so much this year. We played a really good team who played a really good game tonight.”

This will be a difficult few days watching — or ignoring — the American League Championship Series, now featuring two bitter enemies. Somehow the Astros are there after a 29-31 regular season, defiant and insolent, eager to argue they haven’t been artificial champions.

And somehow the Rays are there after surviving this breathless, breathtaking, winner-take-all classic. Gerrit Cole was as magnificent as he needed to be, one run allowed across 5 ¹/₃ innings, nine strikeouts, only one hit, the fifth-inning homer to Austin Meadows that tied the game at 1-1. Aaron Judge had given the Yankees hope with a solo shot in the fourth, and it seemed for a time that might hold up.

It didn’t hold up. Meadows hit one just out of Judge’s reach in the fifth, and then Brosseau hit one just out of the reach of Brett Gardner in the eighth. Brosseau swore at game’s end he wasn’t seeking revenge for the missile Chapman had unleashed near his head back in September, and if he says it’s so, we have to believe it.

But the contrasting dugouts told you all you needed to know about how everyone else felt. Tampa Bay was jubilant, a frat house unleashed with kegs freshly tapped, a party brewing in San Diego. And the Yankees were instantly silenced, a season of such promise suddenly hooked up to life support. There would be no ninth-inning magic, no 11 o’clock lightning. Not this time. Not this year.

Something will have to give. This was supposed to be the team to beat in the American League, after all, and they wind up finishing a step short of last year. There wasn’t enough starting pitching. And in the most critical time of the year, there wasn’t enough offense against Tyler Glasnow (working on two days’ rest) and a Tampa Bay bullpen that was close to perfect.

It was the Yankees who were supposed to romp through the American League and instead it was the Rays, winners now of 45 of the 67 games they’ve played so far this year. The rest of the baseball world may be all-in with the Rays now, hoping they’ll wipe the smirks off the Astros’ faces; Yankees fans can be forgiven if the whole ALCS suddenly feels like Iran-Iraq, best-of-seven. Nobody to root for. No season left. Winter awaiting.

“We’re gonna get there,” Boone said. “I know it. It’ll make it all the sweeter. We just have to keep grinding away at it.”

No grinding until February, if we’re all lucky. No baseball for a while. Winter awaits. Boone was right. The ending is cruel. It really is.

How Princess Diana’s wedding dress was recreated for The Crown