Home » Connor McDavid Is Having a (Shortened) N.H.L. Season for the Ages 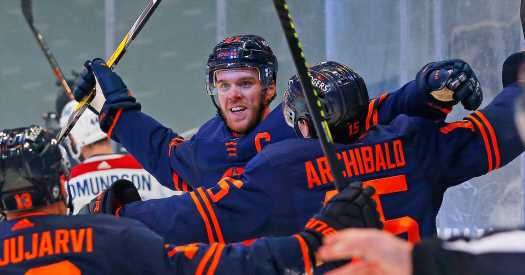 Connor McDavid Is Having a (Shortened) N.H.L. Season for the Ages

A 100-point season is a benchmark of greatness in the N.H.L. That Connor McDavid is closing in on that total this season, with only 56 games to get there instead of 82, is simply remarkable.

With one point awarded for each goal or assist, one to five players get to 100 points in a typical season. McDavid hit the total in his first three full seasons. Last season, he reached 97 points; he would have made it four in a row, if not for the season’s being truncated to 68 to 71 games per team instead of 82.

Of course, once the pandemic-affected current season was announced at 56 games per team, it was clear that no one would make it to 100. But that prediction did not account for McDavid’s having a mind-blowing year for the Edmonton Oilers at age 24.

McDavid stands at 93 points — 31 goals, 62 assists — with five games to play. The second player in the standings, his teammate Leon Draisaitl, has 75.

Over his last four seasons, McDavid has tallied 1.2 to 1.5 points per game played. This season he is at 1.8.

Extrapolating his points, he would be on a pace to get 150 over an 82-game season. That’s a total that hasn’t been achieved this century. Nikita Kucherov’s 128 for the Tampa Bay Lightning in 2018-19 is the best total in the last 20 years. 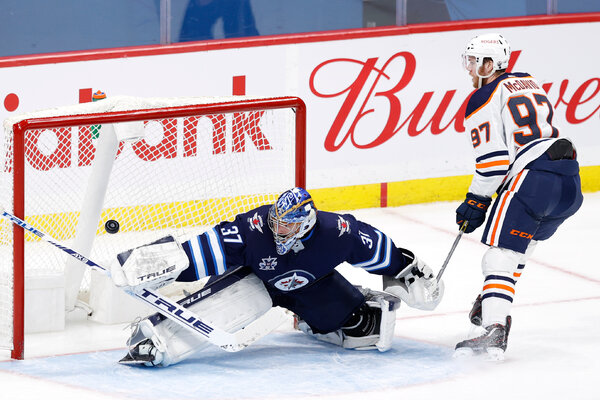 Besides points, McDavid ranks first in the N.H.L. in assists, hat tricks and point shares, a Hockey Reference statistic that is the equivalent of baseball win shares. He is second in goals and game-wining goals to Auston Matthews of the Toronto Maple Leafs. McDavid is the prohibitive favorite to win his second Hart Trophy as the league’s most valuable player.

It seems clear that more than that, McDavid is having one of the best seasons in N.H.L. history. Only two players consistently scored at a faster rate, Wayne Gretzky and Mario Lemieux.

“The maturity that he’s shown this year, he’s gone to an even higher level,” Gretzky told The Athletic, referring to McDavid. “And I don’t just mean in points. His physical play is a lot higher than it’s been in the past. His body language is that he doesn’t want to lose, and it’s infectious through the hockey club.”

The next Gretzky? Pundits have started calling younger players, like the rookie Jack Hughes of the New Jersey Devils, “the next McDavid.”

McDavid is fast on the ice and remarkably dexterous. But for some hockey fans, that would not be enough. They are wowed by skill, and truly revere those who can add at least some rugged play.

Gretzky is not the only one who has noted McDavid’s physicality. In March, McDavid delivered a punishing hit on Jesperi Kotkaniemi of the Montreal Canadiens, driving his elbow into Kotkaniemi’s shoulder and jaw. He received a fine, but not a suspension. The incident prompted tut-tutting from some corners, though nary a corner in Edmonton.

If there is a knock on McDavid’s season it involves the quality of his competition. In this unusual N.H.L. season, teams are only playing others within their division, and the Oilers are in the all-Canadian North division. It’s hard to gauge exactly how strong each division is, with so many usual opponents unmet. Last season, the Oilers, the best Canadian team, were just the eighth best team in the league. And no Canadian team has made the Stanley Cup finals in 10 years, or won it in 28.

McDavid has been playing hockey since he was 4 and has been heralded across the continent at least since he was 13. The Oilers took him No. 1 in the N.H.L. draft, and he was immediately anointed as the savior who would rescue a team that, once a dynasty winning five Stanley Cups from 1983 to 1990, had missed the playoffs for nine straight years. “I think my expectations of myself exceed any of those that are put on me,” McDavid said at the time.

The Oilers have made the playoffs twice in McDavid’s tenure, and have an 8-9 record there. They look to be getting the second seed in the North this season, and potential first- and second-round series against the Jets, Canadiens or Maple Leafs seem winnable.

Going into a game on Thursday night against the Vancouver Canucks, McDavid needs seven points in five games to reach 100. He has scored a point in 40 of 51 games this season, has 24 points in his last 10 games and 12 in his last five. Barring injury, he looks likely to get there, and beyond.