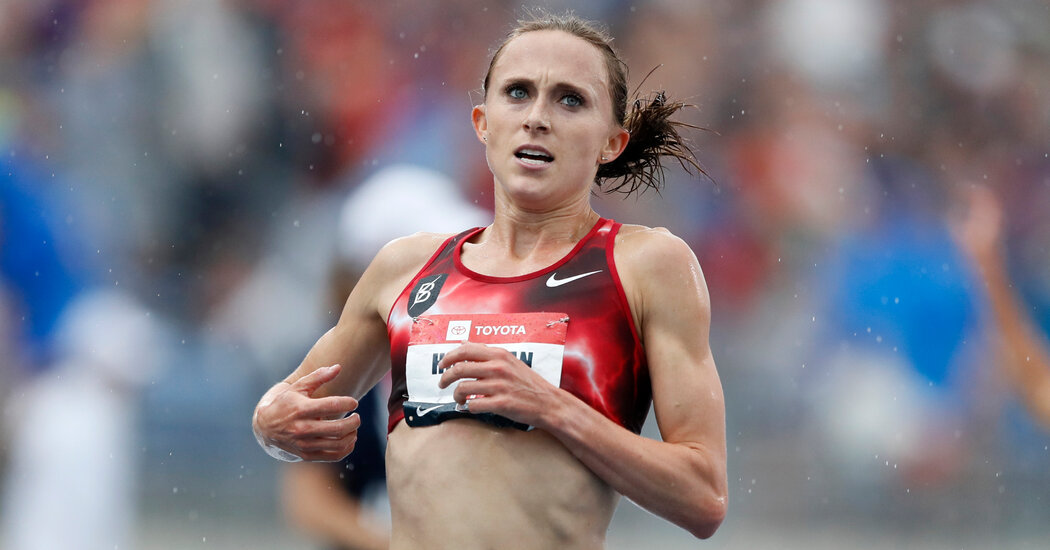 EUGENE, Ore. — After a whirlwind eight hours that caused immense confusion across the world of track and field, the United States Olympic and Paralympic Committee confirmed on Thursday night that Shelby Houlihan — a distance runner who has blamed a positive drug test on tainted meat in a burrito she ate — will not be allowed to compete at the U.S. Olympic trials on Friday, and therefore will miss the Games.

Until Thursday morning, it did not seem like there was even an option for her to compete. Houlihan, who holds the American record in the 1,500 meters, announced Monday that she had been banned from competing for four years after a December drug test was positive for the anabolic steroid nandrolone.

She said that about 10 hours before the test she ate at a food truck that served pig offal, the internal parts of a pig, which some studies has shown to contain nandrolone. But confusingly, Houlihan’s lawyer said she actually ordered a carne asada burrito (which has beef), and wasn’t clear about how pig offal might have made its way into the tortilla with the other ingredients. The lawyer, Paul J. Greene, did not respond to an email requesting comment on Thursday evening.

After the positive test, Houlihan and the Athletics Integrity Unit, a drug testing agency founded by World Athletics, the international governing body for track and field, agreed to an expedited process in which the Court of Arbitration for Sport heard her case. The Swiss-based court upheld Houlihan’s four-year suspension, and she was seemingly out of both the upcoming Olympics and the 2024 Games in Paris.

But U.S.A. Track & Field, the national governing body of the sport and the organizer of the country’s Olympic trials, unexpectedly announced Thursday morning that Houlihan would be allowed to compete.

“Given there is an active appeal process, USATF will allow any athletes to continue competing until the process is completed,” the organization said in a statement.

The Court of Arbitration for Sport’s ruling is final, and the only body Houlihan could appeal to is the Federal Supreme Court of Switzerland, and it is not clear if she has done so.

It also seems settled that the rules of both World Athletics and the World Anti-Doping Agency would not allow Houlihan to run, and throughout Thursday various national and international bodies condemned U.S.A. Track & Field’s initial decision to allow her to participate in the trials.

“All Member Federations must respect CAS decisions,” a World Athletics spokesperson said in a statement, adding that the organization was talking to U.S.A. Track & Field.

The Athletics Integrity Unit said it had written to U.S.A. Track & Field to clarify that Houlihan’s participation in “any Competition or activity authorised or organised by a World Athletics Member Federation, such as USATF (i.e., the US Olympic Team Trials — Track & Field) is strictly prohibited.”

A spokesman for the United States Anti-Doping Agency, which is not even formally involved in Houlihan’s case, said: “Under the rules she’s not allowed to compete. It would be illegal for her to do so, unless a court orders differently.”

The national governing body was even criticized by more than 30 prominent runners, including Des Linden and Molly Seidel, who said in an open letter that the organization’s decision “creates a very troubling precedent for our sport.”

Still, Houlihan was listed on Thursday as a competitor in the 1,500- and 5,000-meter races — both scheduled for preliminary rounds on Friday — before the U.S. Olympic and Paralympic Committee finally intervened.

Had it allowed Houlihan to compete, U.S.A. Track & Field would have risked punishment from several organizations. Late Thursday evening, Sarah Hirshland, the chief executive of the U.S. Olympic and Paralympic Committee, said the organization and U.S.A. Track & Field “can confirm that we will adhere to the WADA Code and any CAS decisions that govern athlete participation in sanctioned events.”

It remains unclear why U.S.A. Track & Field believed Houlihan was still eligible to compete, and a spokeswoman did not respond to a request to comment. But barring yet another unforeseen twist, the closest Houlihan will be able to watch the first heats of the races she hoped to enter is from the stands.