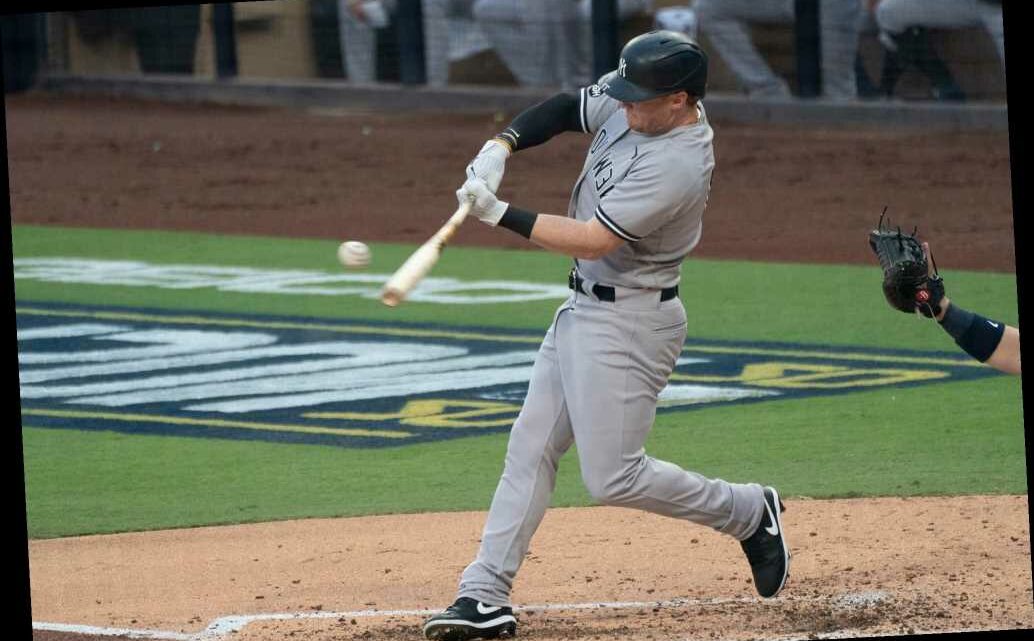 Clint Frazier is the Yankees master at waiting his turn

At the moment of contact, you could hear almost all of Clint Frazier’s loyal constituency leap to their feet and lend their voices to the night. These are the moments they crow about most loudly, most passionately: the bat speed, the absurd ability to turn on fastballs, even one at eye-level, as this one was.

One second, Tampa ace Blake Snell figured he was simply firing something for Frazier to think about. The next he was watching a baseball soar like a rocket into the second deck at Petco Park, 418 feet away.

Frazier would not be the lone Yankee to rise to the moment, to help deliver a 9-3 victory over the Rays in Game 1 of this best-of-five American League Division Series. Aaron Judge and Kyle Higashioka also hit blasts that helped turn a 3-2 deficit into a 4-3 lead in the fifth, and there was Giancarlo Stanton’s cherry-on-top home run in the ninth.

Gerrit Cole, shaky at times, was still a Game 1 horse, now 2-for-2 in these assignments. The Yankees bullpen? In what could be an intriguing and awfully busy week, two-thirds of the three-headed monster of Chad Green, Zack Britton and Aroldis Chapman foiled the Rays across the last three innings, finishing the job that Cole started, Chapman’s services deemed unnecessary once Stanton went deep.

But Frazier was the name on the tip everyone’s tongue as this series began, because he received but one at-bat in the two-game wild-card series with the Indians (he struck out in Game 2), because he is every bit as intriguing a talent as the Yankees have, capable of doing things that make you blink when you see them to make sure that you saw them.

He has waited for his turn, done so without much complaint, let the voices of his backers on Twitter and elsewhere do much of the campaigning for him. Those surrogates are at their loudest when Aaron Boone writes Brett Gardner’s name in the lineup in lieu of Frazier’s.

It is not meant to disrespect the eldest Yankee statesman, not really, but merely meant to reflect an enthusiasm for Frazier, who even this early in his career as a player is the kind of player it’s awfully hard to take your eyes off of: the red hair, the No. 77 on his back, the way he can swing a baseball bat so fast it disappears in a blur when he swings.

“He’s a big reason why we’re here,” Aaron Boone had said before the game, explaining what should have been an obvious choice to pick Frazier over Gardner to face the lefty-throwing Snell. “He earned his way into the lineup tonight.”

He was very good this year: eight homers, 26 RBIs, a .905 OPS in only 39 games and 131 at-bats. He spent some time at the alternate site. He said nothing. When Stanton got healthy Frazier’s playing time diminished, as it almost always does. He said nothing.

There may come a time, may come a season, when that won’t be his M.O. any longer, when he will finally grow tired of playing the faithful soldier, when the reality that he would find plenty of at-bats for almost all of the other 29 teams in the sport will officially grow old.

For now, there is this, from Frazier, from a few weeks ago:

The Rays go with a hard-throwing right-hander Tuesday night, Tyler Glasnow, and that almost certainly means that Frazier will report to the ballpark in the afternoon and see Gardner’s name in the lineup, hitting eighth, and he’ll see his own name in the pile of reserves.

That will set off a few of his most ardent social media defenders. It won’t set him off. He’ll wait his turn. If there’s one thing besides hitting baseballs that Clint Frazier has learned in his time in New York it is how to wait his turn.