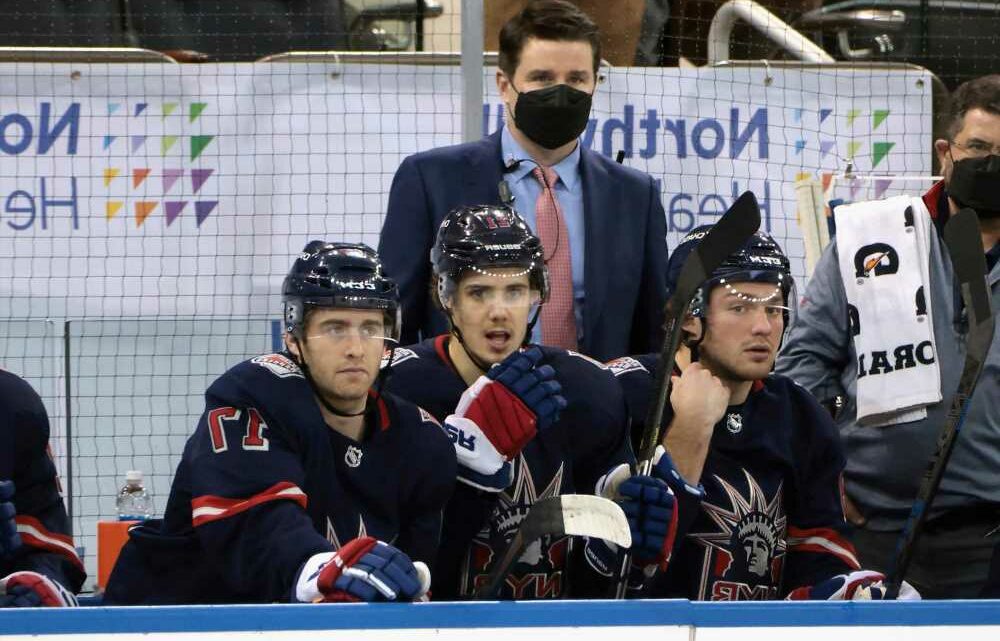 Rangers must resolve disconnect between David Quinn and top forwards

So I was talking Wednesday night to a peer of Chris Drury, a former teammate who is now an executive of an NHL club, and one of the first points he made was that, “Chris is going to be able to go into that room and speak the players’ language.”

And that is something Drury intends to do as president and general manager of the Rangers while charged with providing the missing ingredients necessary to transform the team into a legitimate and perennial Stanley Cup contender.

“I’m certainly not going to be hanging around the locker room every single day, but I’m going to be there enough to have the pulse of the team from the inside rather than just looking at it from 10 floors up,” Drury told The Post on Thursday afternoon while driving from the Wolf Pack’s AHL game in Marlborough, Mass., to the Rangers’ NHL contest in Boston.

“I think that’s important for me and for the team.”

The tone is set from the top. Jim Dolan, who made the decision to elevate Drury into these twin roles after dismissing John Davidson and Jeff Gorton, told The Post earlier in the afternoon that he believed the Rangers had an issue with “culture.”

“I would say it’s evolving,” Drury said. “For us to get to where we want to go, which in the short term since you can’t win the Stanley Cup without making the playoffs, is to get into the big dance.

Drury won a Cup with the Avalanche. He played in Calgary, was a linchpin for those outstanding teams in Buffalo for whom he became The Big Moment Kid. He played the final four years of his career with the Rangers, whom he captained from 2008-09 through 2010-11 before he became a buyout casualty after struggling through his last season with knee issues.

“I obviously played for a long time, I feel like I went through a lot of different circumstances as a player, some good, some not so good,” he said. “So I’m definitely going to lean on that experience and look at things and can speak the players’ language.

“But as I’ve said, a big piece of me feeling ready and knowing I’m ready is Jeff Gorton. He included me in everything. He made sure I was learning something every step of the way and for that I will always be grateful.”

Drury is 44 years old, from a different generation than Davidson and Glen Sather. He can jump-start a progressive movement within what has been a bastion of Original Sixism. Additional skills coaches and development personnel should be added to the staff. This generation of young hockey players is growing up on skating instructors. There is room for one on the Rangers.

The hockey department can become more diversified, not so that the franchise will receive plaudits on social media, but because those from varied backgrounds add differing and valuable perspectives. Analytics will play an important role in this regime.

“I think analytics are a big piece of the puzzle,” said Drury, who will add a number of support personnel. “You need as much information as you can when you’re trying to make the best decisions you can and I think in a lot of ways analytics peels back the layers of what you are looking at.

“Sometimes it confirms the eye test and other times it proves the eye test wrong, so you are always trying to find the way to make the right decision.”

The original plan was for Drury to become GM operating in concert with a team president. But Drury thought it was important to wear both hats.

“Of course I’m going to lean on people in different departments, but at the end of the day, I wanted to have the ability to do the things that I thought were necessary,” he said. “I think having both roles, the way they are set up, I’m going to have that ability.”

Drury, from Trumbull, is the Connecticut Yankee. He might bleed the red, white and blue of the Rangers, but his heart is pinstriped. And Dolan on Thursday likened him to Yankees GM Brian Cashman, a noted rappeller on the side.

“Well,” Drury said. “I can tell you I’m not going to be scaling any walls any time soon.”

Except that he and his team will be scaling the mountain with the Stanley Cup at its peak. Everest for the Rangers.

These ‘Shadow And Bone’ Behind-The-Scenes Facts Are So Magical