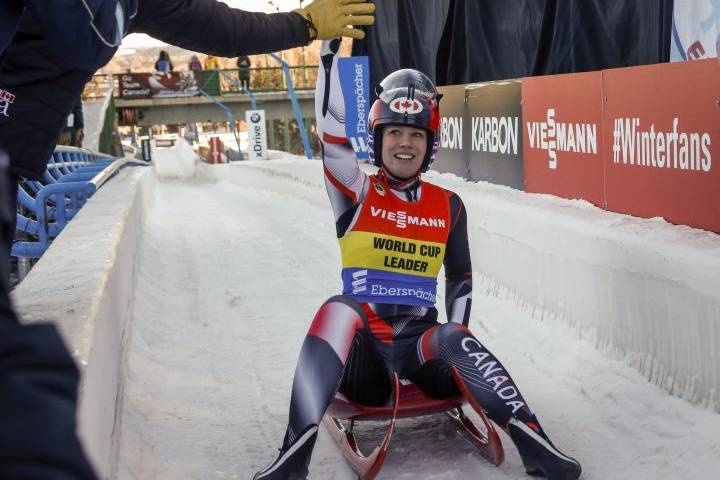 Alex Gough is still in demand on Canada’s luge team after her ceremonial retirement run Saturday.

Her heir apparent Kim McRae is leaning on Gough to help her balance an intense schedule of luge and school.

McRae, who earned a World Cup bronze Saturday in Calgary after Gough’s farewell slide, is racing a reduced schedule this winter to cram in nursing studies.

“I sat and had dinner with her about a month ago and said, ‘I’m panicking, I can’t do this, I can’t do luge, I can’t do school,’” McRae said Saturday.

“She said, ‘Calm down, I made it through, it was horrible, but I made it, you can make it too.’ She’s been a real role model even when she’s retired.”

With next week’s World Cup in Lake Placid, N.Y., and January’s world championship the only other races on McRae’s calendar this winter, the 26-year-old McRae will have Gough as a coach/mentor when the Canadian team is in Europe.

“If I can help her out and keep her motivated, whether it’s coming out and coaching, or coming out and taking a couple runs with her, I’m happy to hop on a sled for sure,” Gough said.

“I’ve retired and I’m moving on but I’m definitely still very attached to the group that’s here, especially Kim. We’ve been through a lot together. I know what kind of a struggle it is to try to balance school and training.”

Gough, 31, retired the most decorated luger in Canadian history. She was the first Canadian to win an Olympic medal in the sport with a bronze in February’s Winter Games in Pyeongchang, South Korea.

That breakthrough preceded another when Gough, Sam Edney and the doubles duo of Justin Snith and Tristan Walker won relay silver in Pyeongchang.

Gough was the first Canadian luger to be a consistent medal threat in the face of German domination.

She snapped a run of 105 consecutive wins by German women when she claimed her first World Cup victory Feb. 12, 2011 in Paramonovo, Russia.

“Breaking the German winning streak, that’s a pretty incredible milestone along the way,” she said. “And this past February in Pyeongchang, winning the individual medal was amazing, but getting to do it a couple days later in the team relay… that was just the best moment. I don’t think I have words for it.”

Her success spurred Edney, Snith and Walker onto the international podium.

Edney, who also retired this year, was the first Canadian man to win World Cup gold in 2015. He also collected a silver and a bronze since then.

Sixth in Pyeongchang was the best result by a Canadian male at a Winter Games.

“She really gave all of us the belief we could do it and as a group we could chase those medals and be part of that,” Edney said

“It gave me new goals. It helped me want to strive for more and get more and that was something that was definitely from her. Just seeing those results come, it gave me that desire to get to that point and it worked.”

Walker and Snith are medal threats in doubles and finished in the top five at the 2014 and 2018 Olympic Games.

“You need one lead person and Alex did that and everybody else grew together with her to new levels and heights, topping it off with a silver and a bronze in Pyeongchang,” Canadian coach Wolfgang Staudinger said.