Home » Sport » Bubbles and butchery: The real price of your day at the races 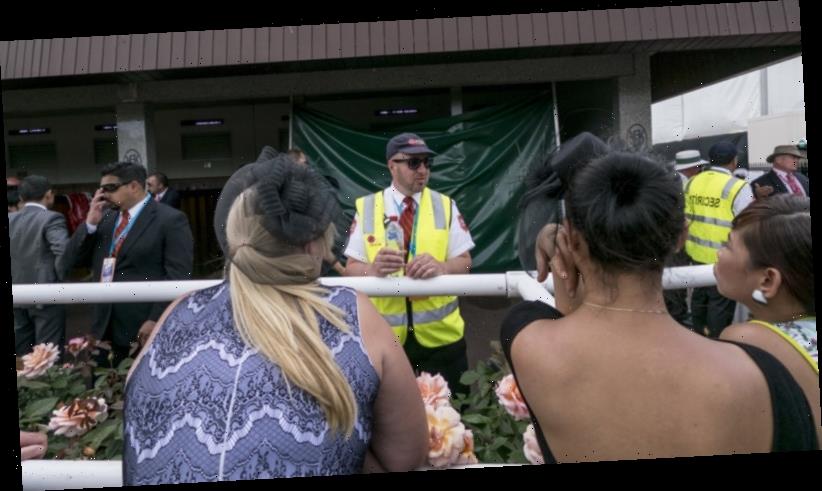 Bubbles and butchery: The real price of your day at the races

They watched with champagne flute in hand as the horse collapsed in his stall, a brilliant, sunlit afternoon in the Birdcage suddenly darkened by the grim reality of racing.

Admire Rakti, one of the favourites for that day's Melbourne Cup, was near death, panicked stablehands were at a loss what to do and on the marquee balcony overlooking this scene, the dapper dressed and neatly coiffed could not avert their eyes. 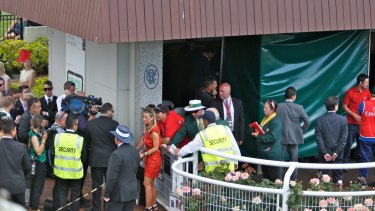 The view from the Birdcage after Admire Rakti died following the 2014 Melbourne Cup.Credit:Eddie Jim

Whether at Flemington, Randwick or today’s Caulfield Cup, death is never far from a racecourse.

Some deaths, such as the acute cardiac failure which killed Admire Rakti shortly after the 2014 Melbourne Cup, are upsetting but are generally accepted as part of a dangerous sport. Other deaths, such as those documented in grisly detail by Thursday night’s 7.30 program on ABC, can’t be accepted by anyone. 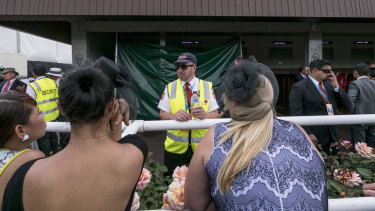 View from the Birdcage after Admire Rakti collapsed in the stalls, Melbourne Cup, 2014. Credit:Luis Ascui

They are happening nonetheless, at remote properties at the end of dusty, country roads where trucks carrying ex-racehorses go in and vans carrying pet mince come out.

Think on that this morning as you head to the track with more money in your pocket than those wretched horses were worth at the end of their lives.

Think on it as you nibble on that tasty morsel at the track. Fancy a bit of horse tartare? It’s quite the delicacy in parts of Belgium, where they wash down paardenfilet, or horse steak, with the local beer, Stella Artois, major sponsor of the Caulfield Cup.

Think on it some more as you head home. Whether you’ve had a good day on the punt or done your dough, whether you’ve lived it large in a marquee or moshed it on the lawn, racing’s big problem remains. It’s a problem that only starts after the final race is run and the last of the day’s drunks are poured into the back seat of a taxi.

According to 10-year records kept by Racing Australia, an average of 14,793 thoroughbreds are foaled in Australia every year. The average racing career of these horses is two to four years and the natural lifespan for a horse is up to 30 years.

You can do the maths. Unless they are being slaughtered, euthanised or otherwise disposed off in scandalous numbers, there are at any given time hundreds of thousands of Australian racehorses living beyond the single purpose for which they were bred.

Are there enough suitable second homes for so many horses? Nikki Cook believes the racing industry is doing nowhere near enough to make sure there are.

Cook runs Shory Park, a eight-hectare rehoming centre for ex-racehorses on the outskirts of Geelong. She takes in horses, usually donated for free by breeders, trainers and owners, lets them unwind in a big paddock, then retrains them for life after racing: how to jump; how to perform dressage; how to stay calm beneath inexperienced riders. 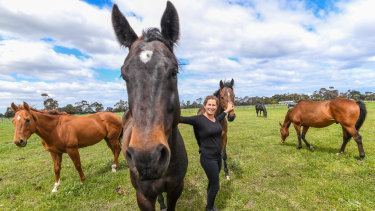 Most find new homes at pony clubs, where parents are discovering that a big ex-racehorse, once properly retrained, is perfectly safe for a child to ride. Others are saddled up for commercial trail rides or put to other suitable uses people have for a strong, healthy horse.

She says her business is the largest of its kind in Australia and takes in about 100 horses a year. She finds homes for all of them, one way or another. If she can’t find a new buyer, she lets them live out their lives at Shory Park.

"They have all got their place and they can all be found a home," she says. "It is a matter of putting in an effort and some time and a bit of love."

Cook says the problem isn’t racing; she has worked at racing stables and says they treat their horses better than some people treat their kids. The problem is what happens beyond the finishing post.

“People need to be aware that like a dog, where you have it till it dies, it’s the same with a horse. You are responsible for that creature the whole way through its life. It’s an important factor to think about and some people don’t when they buy horses. There needs to be more funding for after racing.” 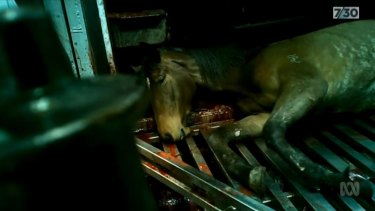 An image from ABC’s 7.30 program showing a horse being killed at a Queensland knackery.Credit:ABC

All thoroughbreds are microchipped. If the technology available was properly employed, the racing industry would track every horse throughout its life. Instead, the requirement for ownership details to be updated when a horse change hands are loosely enforced, if at all.

Once horses leave racing, any duty of care owed by their breeders, former owners and trainers is scratched. As a sport and an industry, horse racing devotes neither the time nor money needed to properly protect the welfare of its retired athletes. Cook says this is exacerbated by the overbreeding of all horses, not just racehorses.

Australia would need 150 Shory Parks to rehome all thoroughbreds foaled in a single year.

The slaughter of racehorses is not unique to Australia.

The Amercian Society for the Prevention of Cruelty to Animals estimates that every year, about 80,000 American-bred horses are trucked north into Canada and south into Mexico. Once there, they are butchered and exported to European countries such as Belgium, where prime cuts of horsemeat fetch a higher price than beef.

The US Senate is currently debating the American Horse Slaughter Prevention Act, a proposed law designed to stop the human consumption of horses. In Australia, there are no national laws and no proposed legislation to prevent retired racehorses being minced.

Cook was appalled by the footage broadcast by the ABC showing horses being treated cruelly by abattoir workers. She says there are circumstances where racehorses, like all animals, need to be euthanised. There are none she can see where a live horse should be sent to knackery.

“People in the industry do it as an easy option or for quick cash. To me, they are not real horse people.”

Quick cash. There’ll be plenty at Caulfield today. Mountains of it at The Everest in Sydney. While we’re counting it, the cost should also be clear.