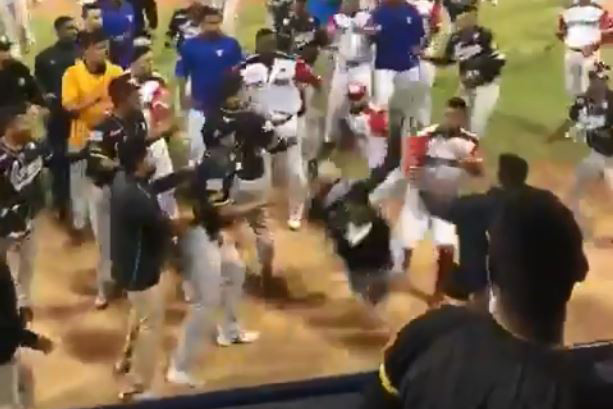 Players in the Venezuelan winter league don’t mess around.

A brutal brawl broke out Wednesday during a game between La Guaira and Caracas, and this was no MLB-style shoving match — no matter how many former and current major leaguers may have been involved.

Several players landed full-scale haymakers, kicks were delivered, and fans rained debris and drinks of all kinds down on the battling ballplayers. Video of the incident was shared on Twitter, earning thousands of likes and retweets.

The initial scrum was kicked off by Caracas right fielder Felix Perez, who charged the mound after La Guaira pitcher Jorgan Cavanerio threw behind him twice during an at-bat.

Benches cleared, there was pushing, shoving and posturing, and it generally resembled what fans have come to expect from these scenarios, if a little more intense.

Perez threw his helmet at Cavanerio, then when Perez went to the ground, Cavanerio appeared to kick him in the chest. Perez got to his feet and was dragged away by teammates.

That’s when all hell broke loose.

Perez got free, charged back into the fold and a full-on melee had begun.

As the fight maneuvered back toward the dugout and the stands, former major league catcher Hector Sanchez, now with La Guaira, landed a massive blow to Perez’s chest, knocking him to the ground.

From there, it was chaos as punches flew from every direction and fans threw food and drinks onto the players.

The game resumed after a 15-minute delay and four ejections – including both Perez and Cavanerio — and was completed without further incident.

As of early Thursday evening, there was no word on any additional action taken by the league, but it is likely forthcoming.

How Much Is Neil deGrasse Tyson Worth?