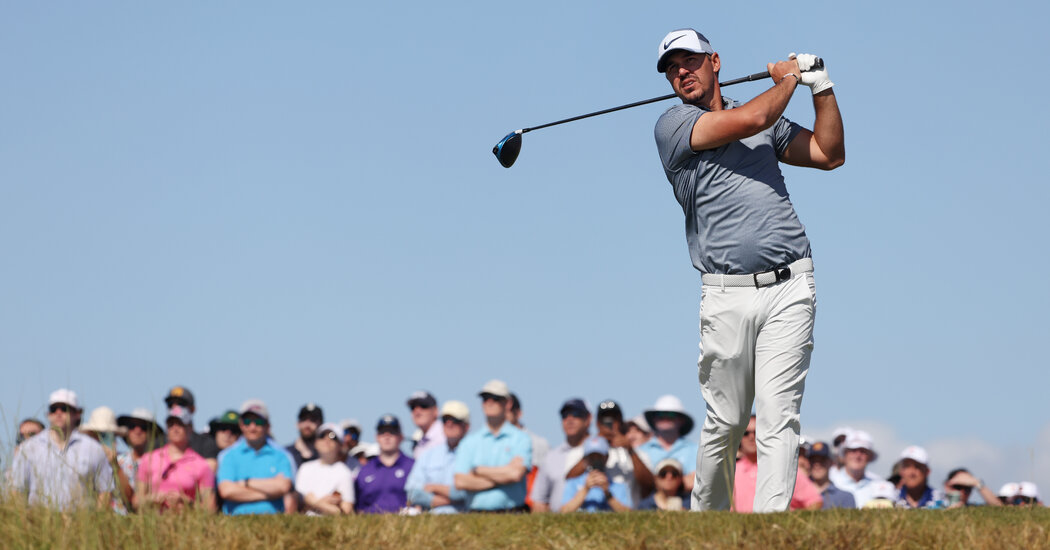 Brooks Koepka Appears Back in P.G.A. Championship Opening Round

KIAWAH ISLAND, S.C. — Brooks Koepka wore a hat on Thursday that looked as if it had been assembled with reckless haste. And perhaps in the dark, too.

But the hat may be the best sign that the stubbornly defiant Koepka of old was back. Strutting across the intimidating Ocean Course at Kiawah Island in the first round of the P.G.A. Championship, he tugged on a cap that demanded attention.

When it elicited stares, Koepka responded with a glare that said: “What are you looking at?”

The air of rebellious confidence seemed to help. While the windswept Ocean Course belittled much of the field — Bryson DeChambeau called it “the most difficult golf course I’ve played” — Koepka made a run up the leaderboard with six birdies that offset a few stumbles for a round of 69 that had him in the early hunt for his fifth major championship.

Corey Conners was the first-round leader after a five-under-par 67.

Afterward, Koepka was in the brusque form of his not-too-distant glory days when he snorted that it was easier to win major championships because more than half the field would crack under the pressure.

“I love it when it’s difficult, I think that’s why I do so well in the majors,” he said Thursday. “I just know mentally I can grind it out.”

Asked if Thursday’s impressive round would renew his confidence, he looked at his questioner disapprovingly.

“I felt like I already had confidence,” Koepka said.

Bravado does not mean Koepka will return to being the powerful, consistent golfer who won four major championships over 26 months from 2017 to 2019. He has had multiple injuries since 2017: a torn wrist tendon, a knee strain, torn labrum and a dislocated kneecap just months ago. And last month, he missed the cut at the Masters.

But in his post-round demeanor Thursday, and in the way he barked out sentences, Koepka seemed rejuvenated, even if he was just trying to convince himself he was on the comeback trail.

Koepka was more than just talk; his golf game was pretty good, too. After more than a year of uneven play and falling from No. 1 to 13th, Koepka fought back.

When he double-bogeyed his opening hole, the 10th, he counter punched with the first of his six birdies on the 11th hole. He did the same after a sloppy bogey on the 15th hole. When he knocked an errant drive off the long procession of hospitality tents left of the 18th fairway, his caddie, Ricky Elliott, noticed that Koepka had inadvertently moved his ball back in his stance when hitting driver off the tee.

“It just sneaks back, but I moved it up and started to hit the ball with the driver a little better,” Koepka, who birdied three of the next seven holes, said.

Some players discourage, or prohibit, their caddies from giving them swing advice, but Koepka does not care.

“He can say just about anything to me,” Koepka said of Elliott. “Nothing anybody says is going to hurt my feelings.”

That could explain his willingness to wear, for golf, an unconventional hat with multi-colored asymmetrical panels and aggressive stitching.

While Koepka vaulted up the leaderboard, other top players were headed in the opposite direction. Rory McIlroy played his first nine in even par, but four bogeys and just one birdie derailed his back nine and led to a three-over-par 75. McIlroy, who won the 2012 P.G.A. Championship on Kiawah Island, bogeyed three of the four par 5s, which is far from usual for the long-hitting McIlroy. He struggled to keep his ball on the fairway, and was forced to gouge wayward shots from the gnarly bushes and sandy waste areas that line every hole. A three-putt caused another bogey on the par-3 fifth hole.

Tying McIlroy at three over par was another pre-tournament favorite, Justin Thomas.

Thomas frequently chased mis-hits that landed in the Ocean Course sand. On the treacherous 18th hole, his tee shot skipped into a waste area and his recovery from there traveled only 67 yards and squirted into some knee-high vegetation alongside the hole. Thomas advanced his next shot about 90 feet. From the rough, he finally found the green with his fifth shot and sank a three-foot putt for a double bogey.

DeChambeau concluded his round at even par, after making the turn at two over, but afterward he seemed unsettled by the Ocean Course’s challenges.

“The wind just kicked my butt, it takes a lot out of you,” DeChambeau said. “It’s windy and you’re standing over a four-foot putt. The wind is blowing really hard, and you think it’s going to break. When the wind stops, it’s not going to break. It’s all just a really difficult thing that you’ve got to control out there.”

“This golf course takes it out of you,” he said, adding: “That is a straight-up fact for me. That requires a lot of energy.” 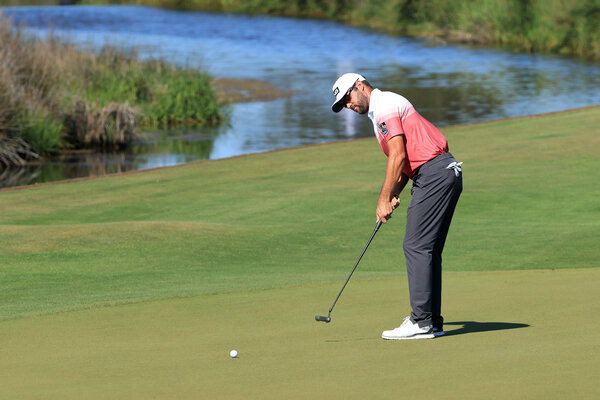 Tied for second with Koepka were: Keegan Bradley, Cam Davis, Viktor Hovland, Aaron Wise and Sam Horsfield. Bradley, who tied for third at the 2012 P.G.A. Championship, channeled the good vibes from nine years ago with four birdies and just one bogey. He admitted that Thursday’s score proved that the Ocean Course suited his game.

Although Bradley did hook his tee shot on the devilish 18th hole, where it landed in the massive hospitality tents left of the fairway, from which he got a free drop and made a closing par. With the Atlantic Ocean and several severe bunkers to the players’ right on the hole, Bradley predicted that if the wind kept blowing, the hospitality tents would be peppered by a bevy of tee shots.

“I wasn’t trying to hit it in there by any means,” Bradley said. But he conceded the tents were a better option than going to the opposite side of the fairway with a missed shot.

“I feel bad for all those people up there,” Bradley said. “They’d better have their hard hats on today. They’re going to be firing them in there all day.”