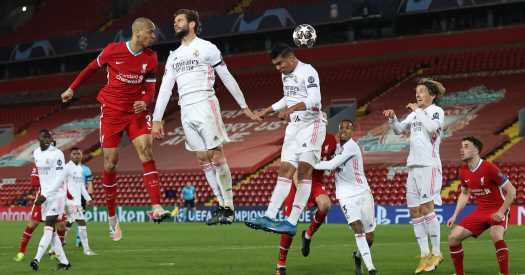 LONDON — The group behind a multibillion-dollar breakaway soccer competition for elite European clubs has warned the sport’s authorities that it has taken legal action to counter efforts to block a project that has drawn widespread condemnation.

As they went public on Sunday with their plans for the European Super League, the proposal’s backers wrote to the president of FIFA, world soccer’s governing body, and the head of UEFA, the European soccer federation, saying that they would like to work with the organizations but that they had also taken measures to prevent anything from getting in their way.

So far, 12 teams, from England, Spain and Italy — including Manchester United, Liverpool, Real Madrid and Juventus — have signed up for the league.

Rumors of the creation of the breakaway competition, which hopes to add three more permanent founding members to what will be an annual 20-team league, prompted FIFA in January to bow to pressure from UEFA and issue a statement that threatened severe repercussions against players and clubs involved in any unsanctioned tournament. UEFA, top European leagues and national soccer associations from the three countries that have clubs enlisted in the new competition issued a joint statement on Sunday condemning the project.

FIFA warned in January that players taking part in the breakaway effort would risk being kicked out of events like the World Cup and that participating teams would lose access to domestic competitions such as the hugely popular Premier League in England.

Faced with that threat, the company created to control the new league told FIFA’s president, Gianni Infantino, and the head of UEFA, Aleksander Ceferin, in the letter sent on Sunday that motions had been filed in multiple courts to prevent any moves to jeopardize the project, which has $4 billion of financing already in place.

The company has “taken appropriate action to challenge the legality of the restrictions to the formation of the competition before such relevant courts and European authorities as may be necessary to safeguard its future,” said the letter, a copy of which was reviewed by The New York Times.

The league they have agreed to form — an alliance of top clubs closer in concept to closed leagues like the N.F.L. and the N.B.A. than to soccer’s current model — would bring about the most significant restructuring of elite European soccer since the 1950s, and could herald the largest transfer of wealth to a small set of teams in modern sports history.

While discussing the legal measures, the six-page letter also invites soccer’s leaders to hold “urgent” talks to find a common way forward for a project that the group says will benefit soccer even beyond the narrow group that will enjoy unparalleled riches should the tournament begin. Under the plan, the 15 founder members of the European Super League would be provided at the start with an equal share of 3.5 billion euros, about $4.2 billion, equating to some $400 million each.

That amount is more than four times what the winner of European soccer’s marquee tournament, the Champions League, took home in 2020. In the letter, the founders of the Super League say they do not wish to replace the Champions League but to create a tournament that would run alongside it.

The damage to the prestige and value of the Champions League, though, would be immediate and long lasting, turning what has for decades been club soccer’s elite competition into a secondary event, one that is unlikely to retain anywhere near its current commercial appeal. UEFA ratified the biggest changes to that tournament since 1992 at a meeting of its executive board on Monday.

Nasser al-Khelaifi, the chairman of the French champions Paris Saint-Germain, was among the officials who voted for the changes. He so far has resisted efforts to lure P.S.G., a club stocked with some of the world’s best players, to the new league. Teams in Germany, including last season’s Champions League winner, Bayern Munich, have also declined to join the new venture.

The substantial changes to the Champions League may now be consigned to irrelevance should the breakaway clubs manage to get their way and take to the field in a competition that they say they hope to begin as soon as this summer.

In the letter, the group said that their urgency stemmed from the huge losses piling up as a result of the coronavirus. The sight of games played in cavernous but empty stadiums has become the norm, and restrictions on public gatherings mean that hundreds of millions of dollars are being lost in gate receipts, while broadcasters have also clawed back vast sums from leagues and competition organizers.

UEFA and other groups opposed to the new competition huddled over the weekend to discuss their legal options and began talks with governments across Europe as well as with the European Union. That led to swift statements of condemnation from figures including Prime Minister Boris Johnson of Britain and President Emmanuel Macron of France.

Faced with the possibility of seeing the value of their own events being devalued in the future and the prospect of current broadcast and commercial partners demanding a reduction in the fees they pay, UEFA is considering seeking damages from the 12 clubs that form the breakaway group, and from some of their top officials.

The biggest European clubs have long been frustrated with sharing wealth from tournaments in which they are the biggest draw, and talks about a new league began well before the pandemic. Documents leaked in 2019 showed that the president of Real Madrid, Florentino Pérez, an architect of the current plan, had sought to create an earlier iteration of a competition involving the biggest teams.

The role of FIFA is also intriguing. Infantino, its president, has talked in recent years of creating new competitions to increase interest in soccer around the globe. As part of that push, he has given his backing to a 20-team Super League in Africa.

FIFA issued a statement late Sunday, reiterating that it would not support a closed breakaway competition. The Super League’s founders, though, insist that their event is not completely closed, saying that there would be access every season to five teams outside the expected 15 founding members.

“The competition intends to include some of Europe’s leading clubs, with open-access qualification routes available on the basis of sporting merit,” the letter said.