Home » Sport » Boxing’s wackiest excuses from love triangle, too much sex and HAIR GEL as Wilder claims he was ‘spiked’ for Fury loss – The Sun 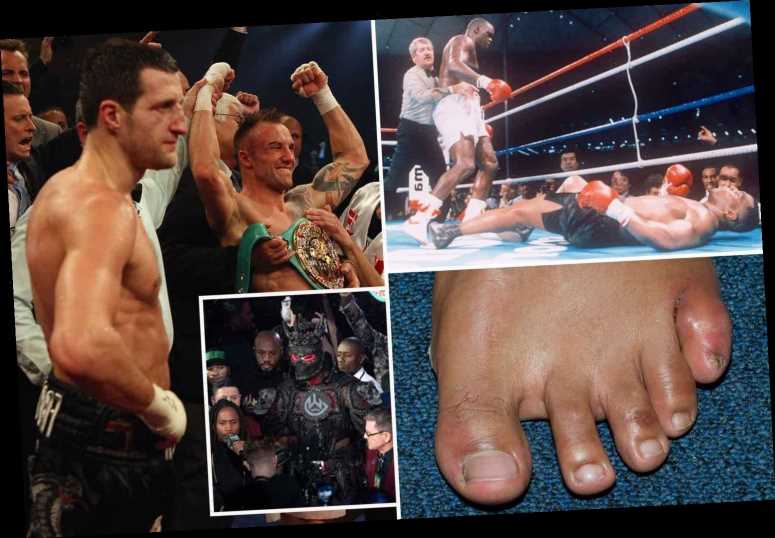 Boxing’s wackiest excuses from love triangle, too much sex and HAIR GEL as Wilder claims he was ‘spiked’ for Fury loss – The Sun

DEONTAY WILDER incredibly claimed his heavy walk-on outfit and water being 'tampered with' were two the reasons why he was battered into submission by Tyson Fury.

The American strolled into the ring in Las Vegas last February wearing an extravagant 45-pound costume. 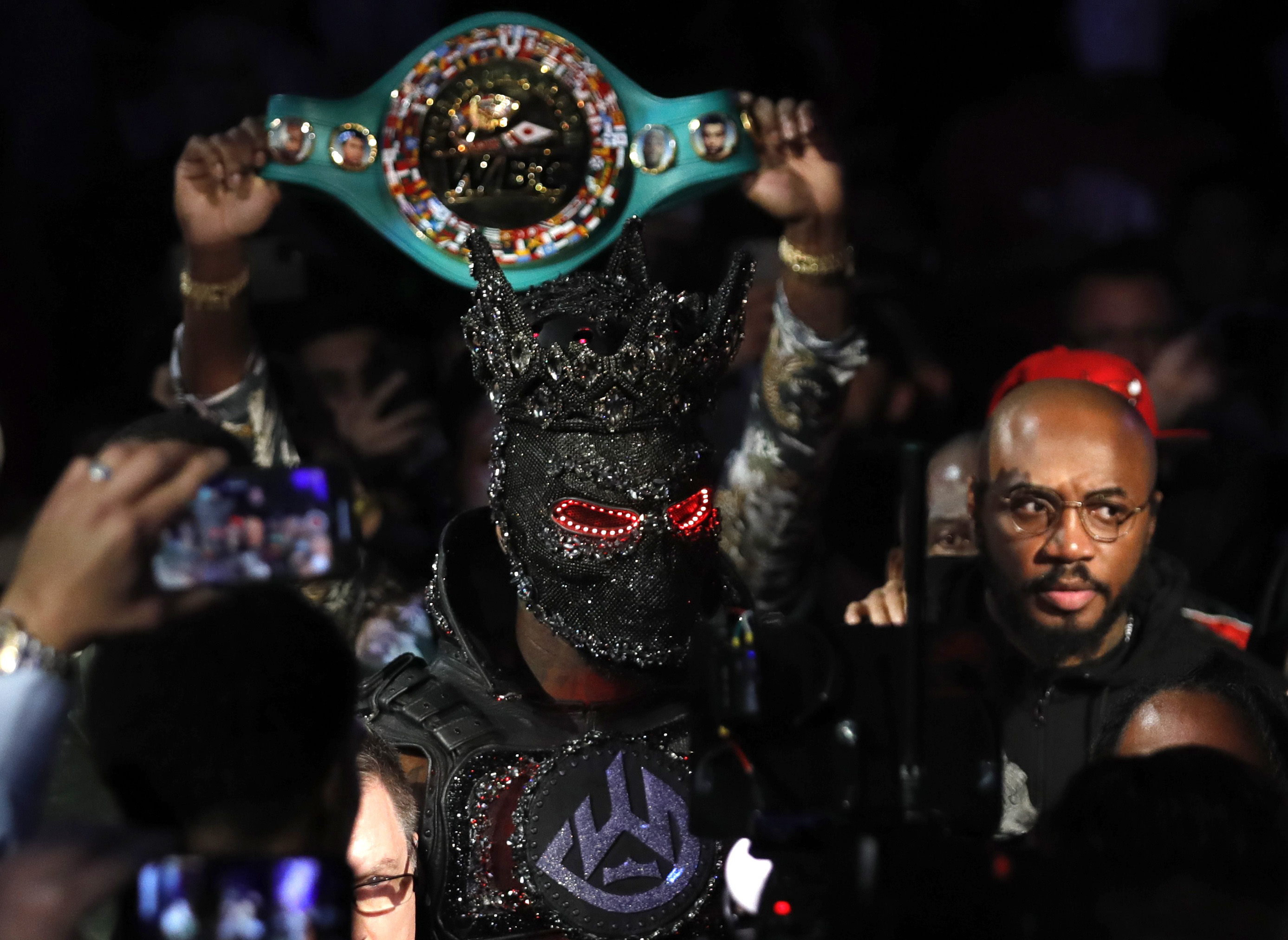 He was then floored twice on the way to his corner pulling him out in the seventh round, as Fury put on the complete performance.

After meekly surrendering his WBC heavyweight world title, Wilder complained that his "uniform was way too heavy" with the helmet and "all the batteries" contributing to him "having no legs".

It will no doubt leave boxing fans wondering what the next excuse could be if the expected trilogy fight is as one-sided as this was.

Here, Sunsport checks out some wacky excuses for various boxers' poor performances in the squared circle. 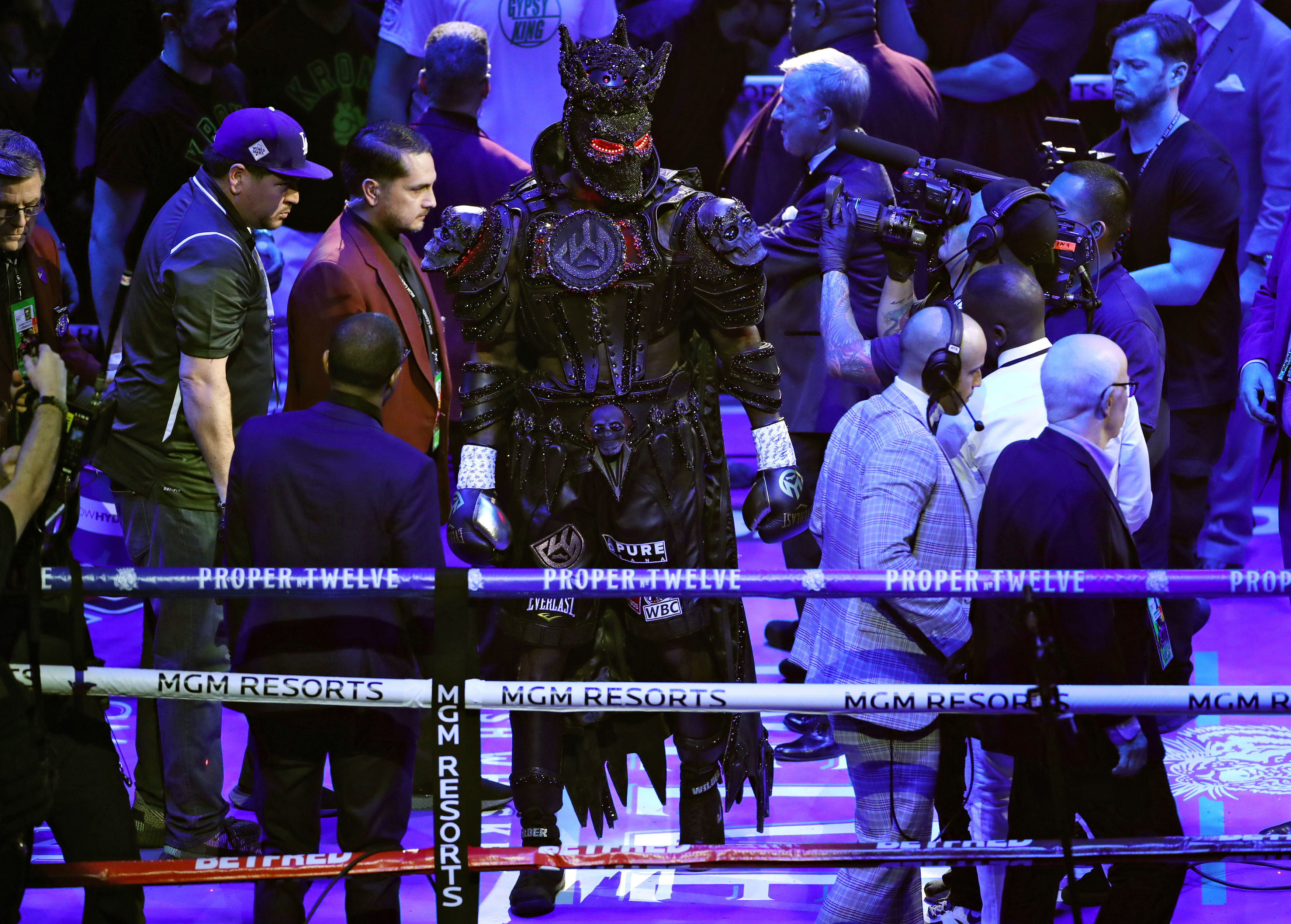 In yet another sensational claim with no evidence provided, Wilder said his water was SPIKED against Fury and was left with 'no control' over his body

He told 78SPORTSTV:“About 15 minutes before going out to the fight, warming up on the mitts, it was perfect, I felt great.

“Until I went to the ring. That transformation, I was drinking certain water and stuff, trying to keep myself hydrated.

“I just start feeling weird. My water was spiked as if I took a muscle relaxer or something like that.

“After a fight is over with and it don’t go in your favour you’re always looking for what happened.

“Certain things, the atmosphere just didn’t seem right. It felt like something was about to go down, and not in my favour.

“It wasn’t just the suit, my water was tampered with.

“This feeling here, it was a different feeling. It was like I had no control over my body, my legs was weak and stuff like that.”

In the build-up to his 2011 world title clash against Wladimir Klitschko, Haye had promised to retire the Ukrainian and used some below-the-belt mind games to try and unsettle his opponent.

Most notably was wearing a T-shirt showing him holding the decapitated heads of Wladimir and his brother Vitaly.

But his performance in the ring was the ultimate damp squib.

After stunning the world by winning the WBA heavyweight world title against Nikolai Valuev, this was a night to forget for the Bermondsey man. 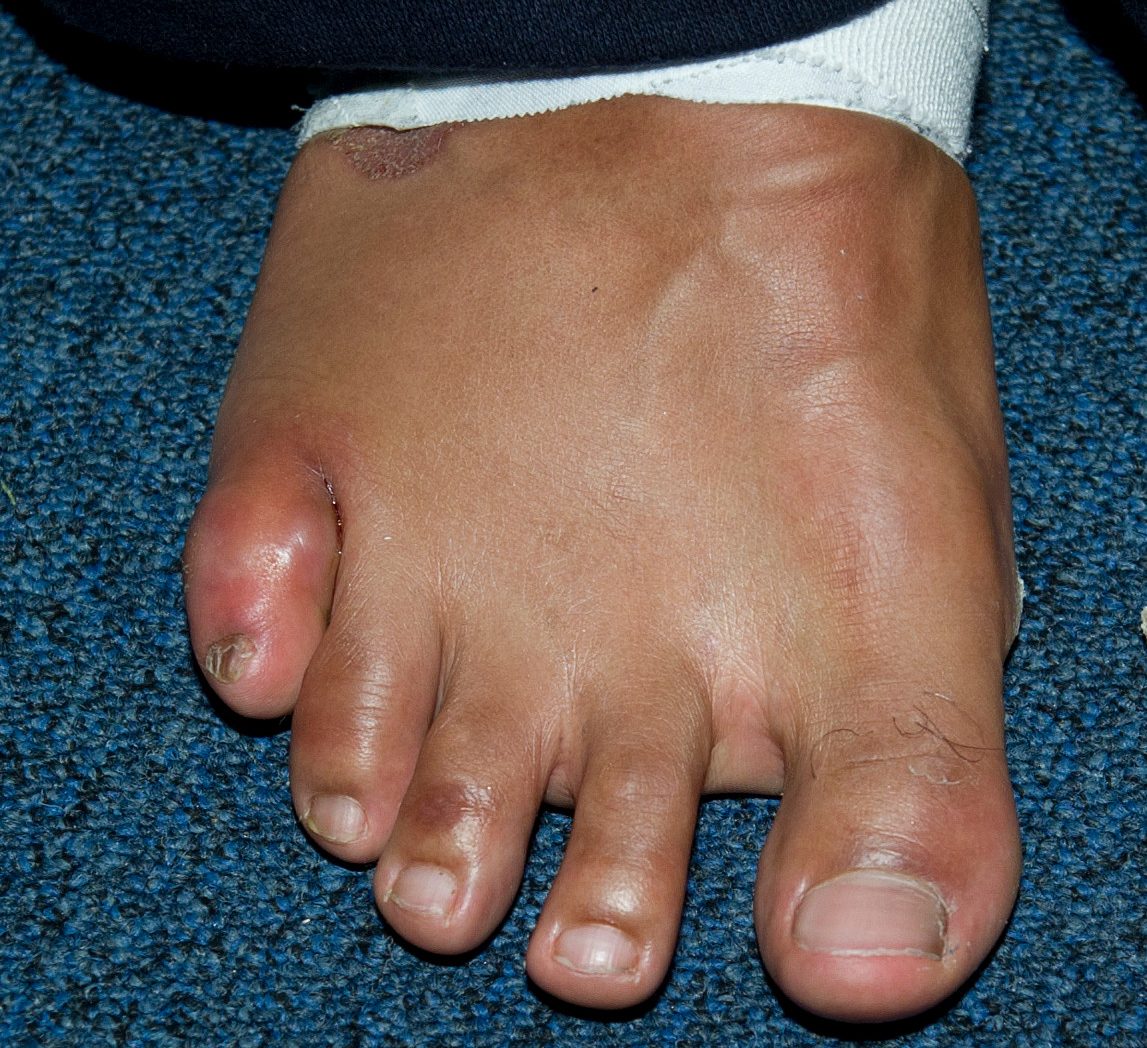 And the reason for his mammoth points loss – a broken little toe.

Haye even stood up on the post-fight press conference table in flip flops to show off his bruised toe – which left journalists and fight fans incredulous.

For a boxer who relies on shooting off his feet to be explosive, the "injury" will have certainly played some part in the defeat.

But it was his excuse when matched with the pre-fight trash-talking that saw him suffer incredible criticism in the aftermatch. 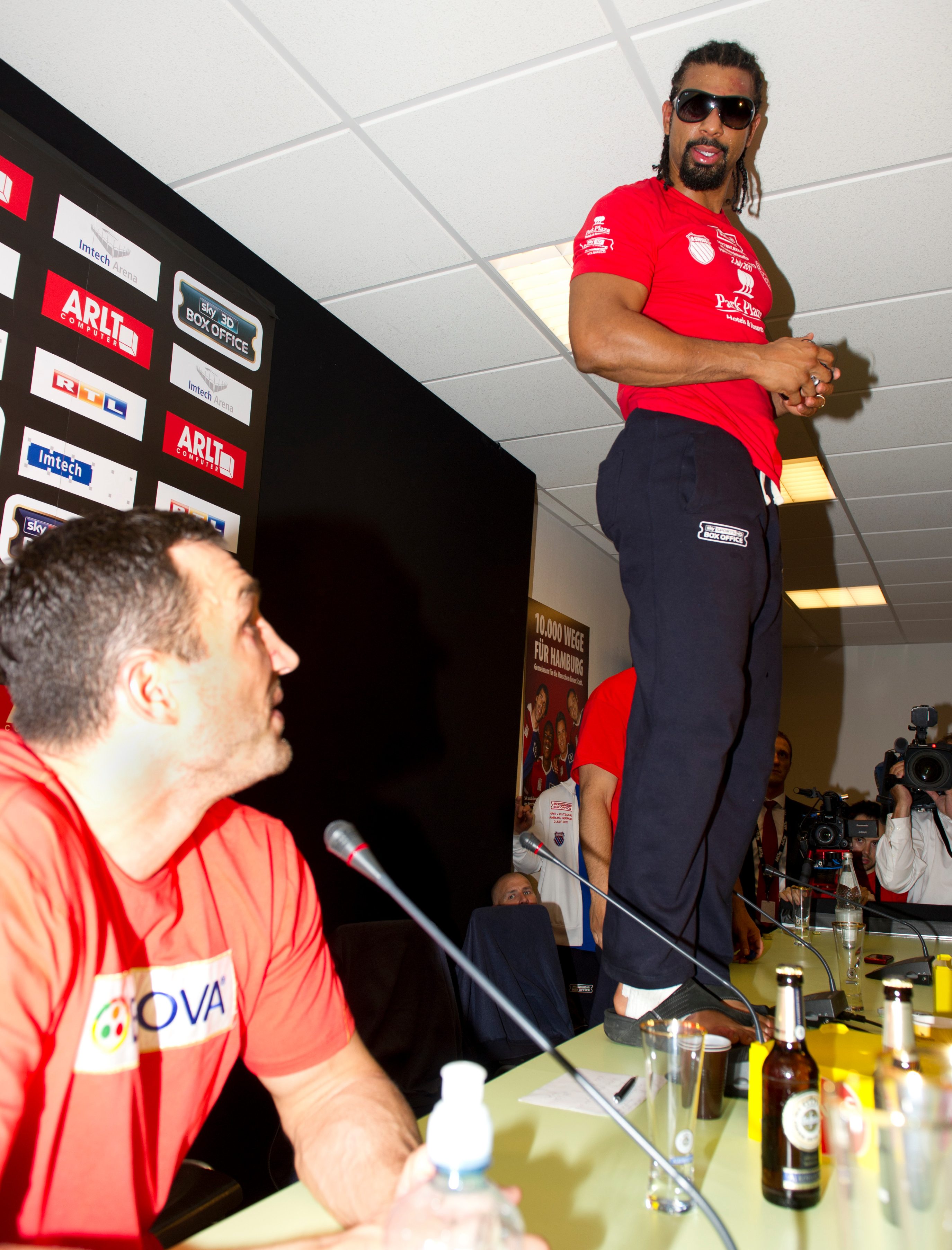 The Brit had won 38 fights straight, was undefeated, and making his second defence of the European middleweight title in 1987 against Sumbu Kalambay.

"The Bomber"who had KO'd most of his opponents on the way, was expected to make a successful defence before fighting for world honours.

But he fell to a unanimous points loss that boxing commentator Steve Bunce has described as "a bad-tempered, confusing brawl with the Italian".

But according to Boxing Social, Graham's mind was elsewhere, as he was dealing with being an "unwitting part of a love triangle". 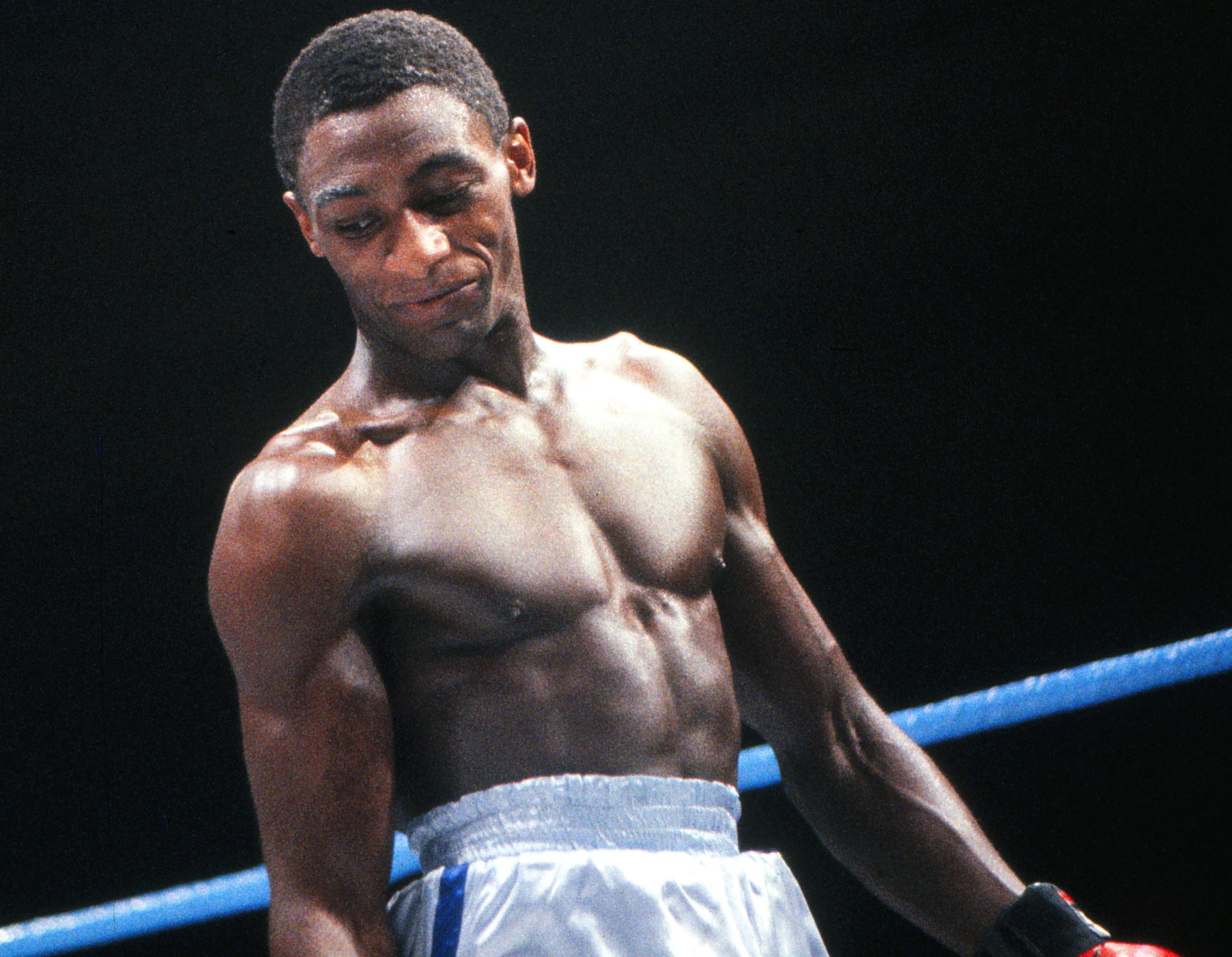 Iron Mike was on the end of one of boxing's biggest ever upsets when he lost to James 'Buster' Douglas in 1990 out in Tokyo, Japan.

And speaking after the fight, the controversial former boxer-turned actor hinted that too much sex had put him off his training.

He said: "I was f***ing them Japanese girls like I was eating grapes."

Tyson had won all 37 of his fights and 42/1 outside Douglas was supposed to be cannon fodder.

But he was floored for the first time in his career before Douglas went on to secure a KO win in the tenth round. 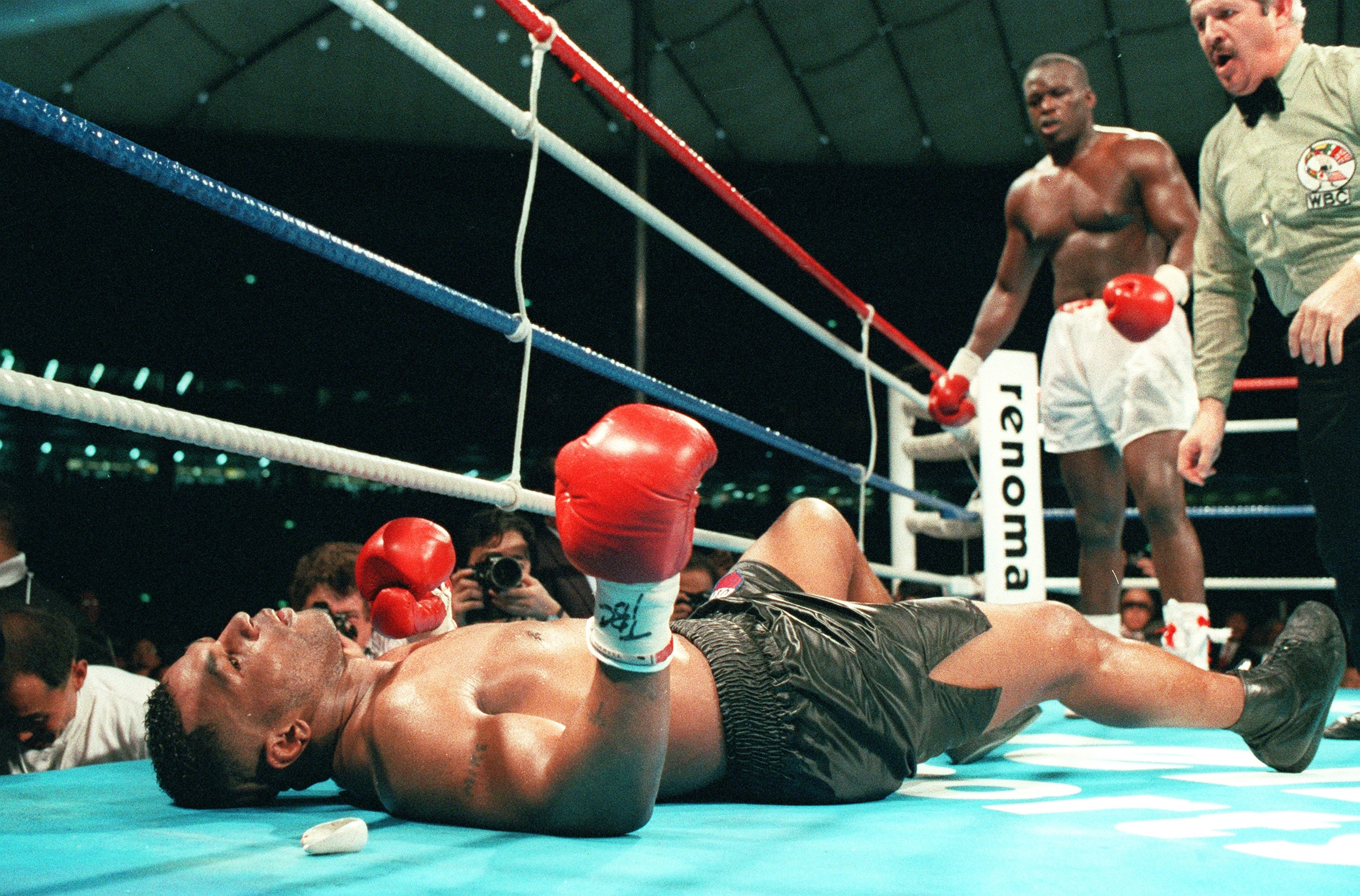 Fight fans couldn't believe it when Witherspoon was floored three times in a first-round KO defeat to James "Bonecrusher" Smith in 1986.

The winner was slated to challenge Mike Tyson for the world title, but Witherspoon blew it big time.

But in his book Terrible Times, the American revealed it was all part of the plan to force a split from promoter Don King.

He even admitted taking cocaine in the days leading up to the fight.

Witherspoon revealed: "I made sure the three-knockdown rule was in place and I took full advantage and admit to throwing the fight.”

“I know people are going to be sad and annoyed with such a revelation — but believe me when I say  my mental health was at risk if I did not get away from Don King. 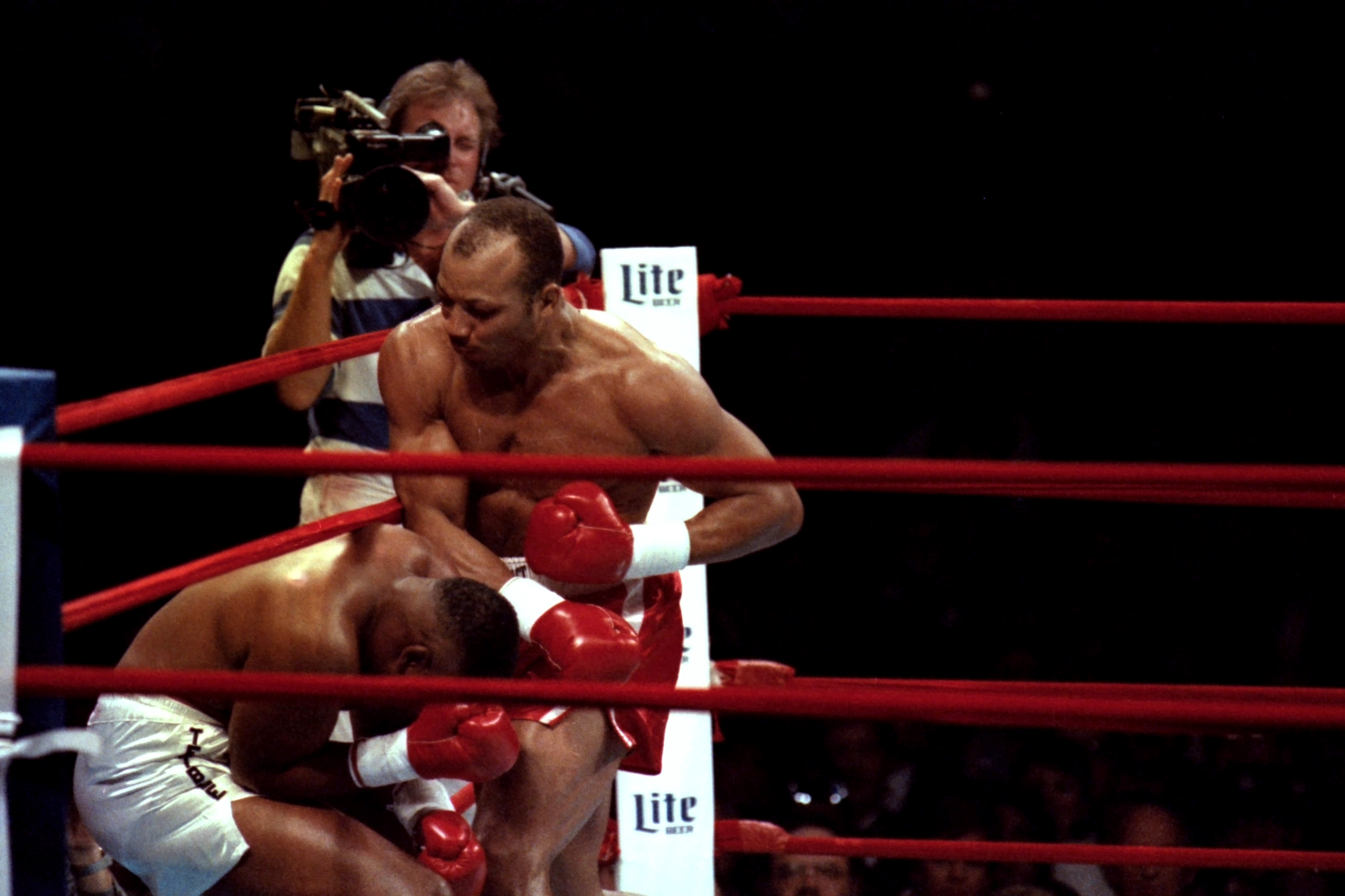 The 2009 scrap between Kermit Cintron and Sergio Martinez is one boxing officials will want to consign to the dustbin.

Which is probably where Cintron wishes his opponent had put his hair gels and mousse before the fight.

Cintron was actually counted out in the seventh round, but somehow managed to convince referee Frank Santore Jr to let him continue.

But it was only going to lead to a wide points win for Martinez anyway, right?

Wrong. Somehow the judges saw it as a draw.

Cintron, in acknowledging he had 'got away with one' had the perfect excuse for his performance.

He claimed to be "distracted by the smell of mousse and wax from Sergio's hair" and that the "fumes" affected him. 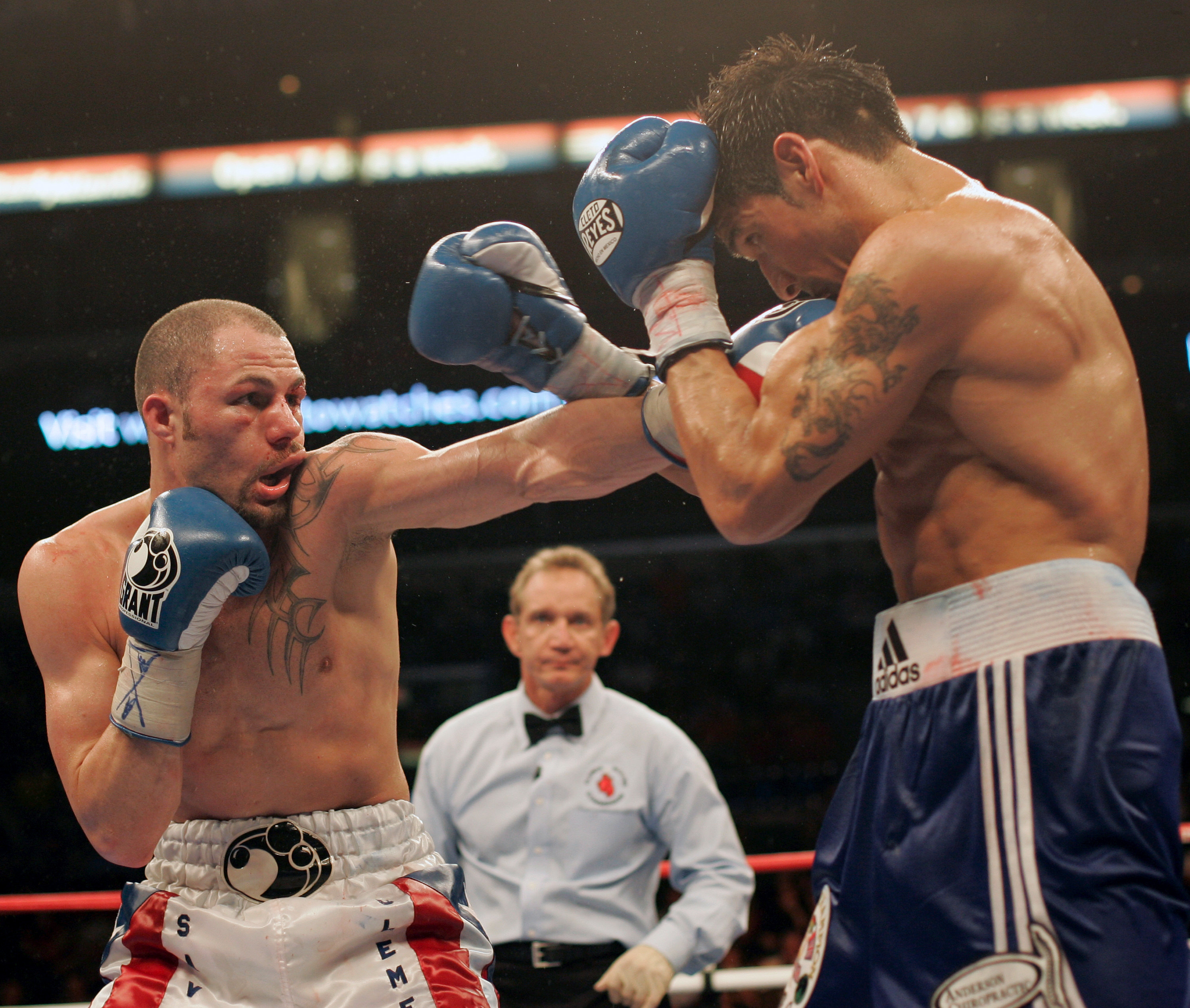 Carl Froch will go down as one of Britain's most courageous boxers, and probably doesn't get the credit he deserves.

But showing similar levels of desire during his career was Mikkel Kessler, and it was the Dane who won a points decision against Froch in 2010.

It was  'The Cobra's' first defeat in 27 fights, but he claimed his preparation had been affected not by injury, not by a switch of trainer, but by an ash cloud.

Ash from Iceland's Eyjafjallajoekull volcano forced commercial flights to be grounded across Europe.

Froch did end up getting a private jet out to Denmark, but claimed to have eaten and drank too much during the delays. 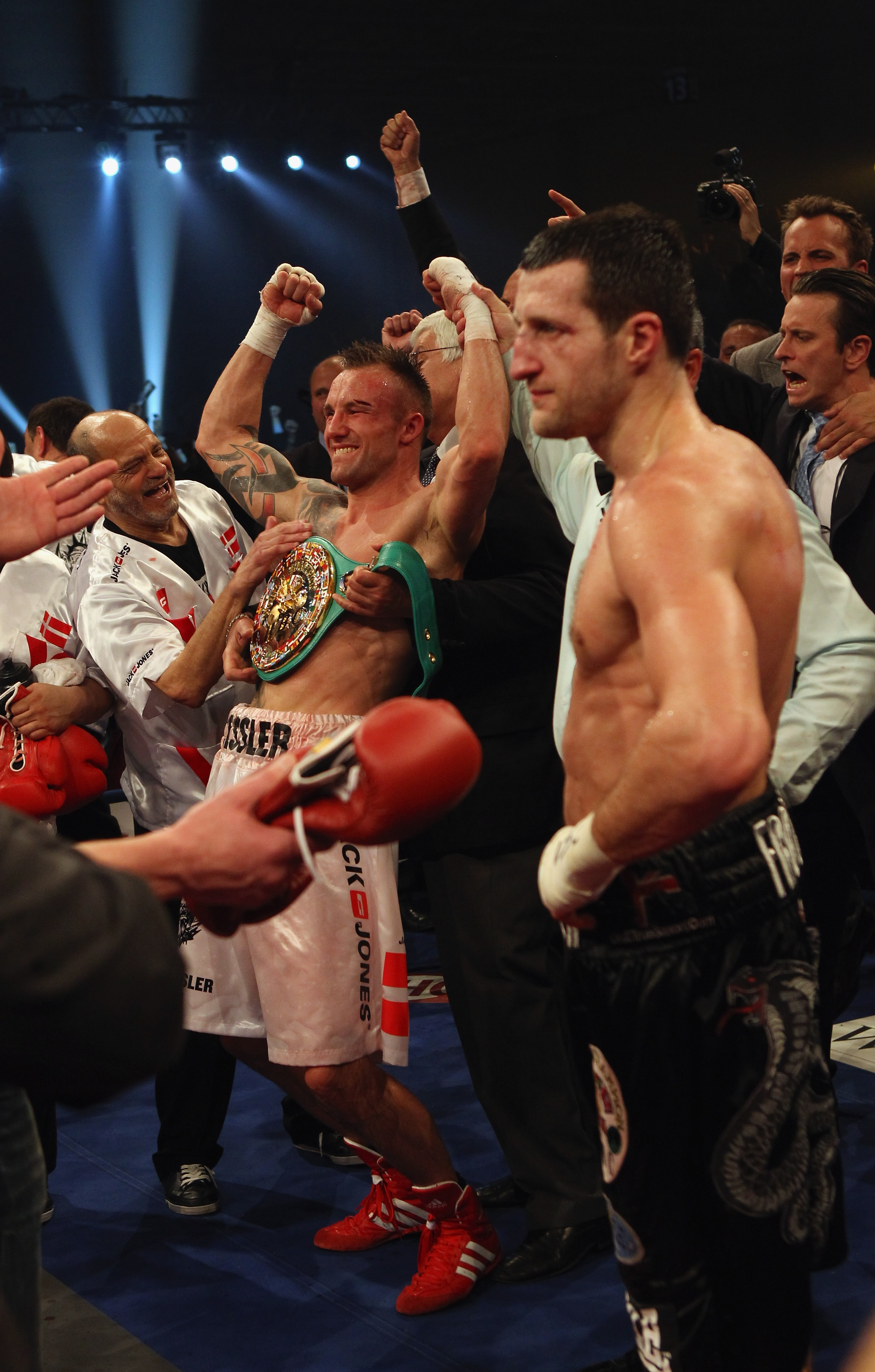 ALEXANDER POVETKIN PUT OFF BY SMELL – 2012

The Russian heavyweight, who has since lost to unified champ Anthony Joshua, laboured to a points win against Marco Huck in 2012.

But most at the Porsche Arena in Stuttgart, Germany, thought Huck should have got the decision in front of his home fans.

However according to team Povetkin, there was the perfect excuse for his poor performance.

The Russian corner claimed Huck had lathered his body in some kind of foul substance that left Povetkin's "eyes watering because of the stench". 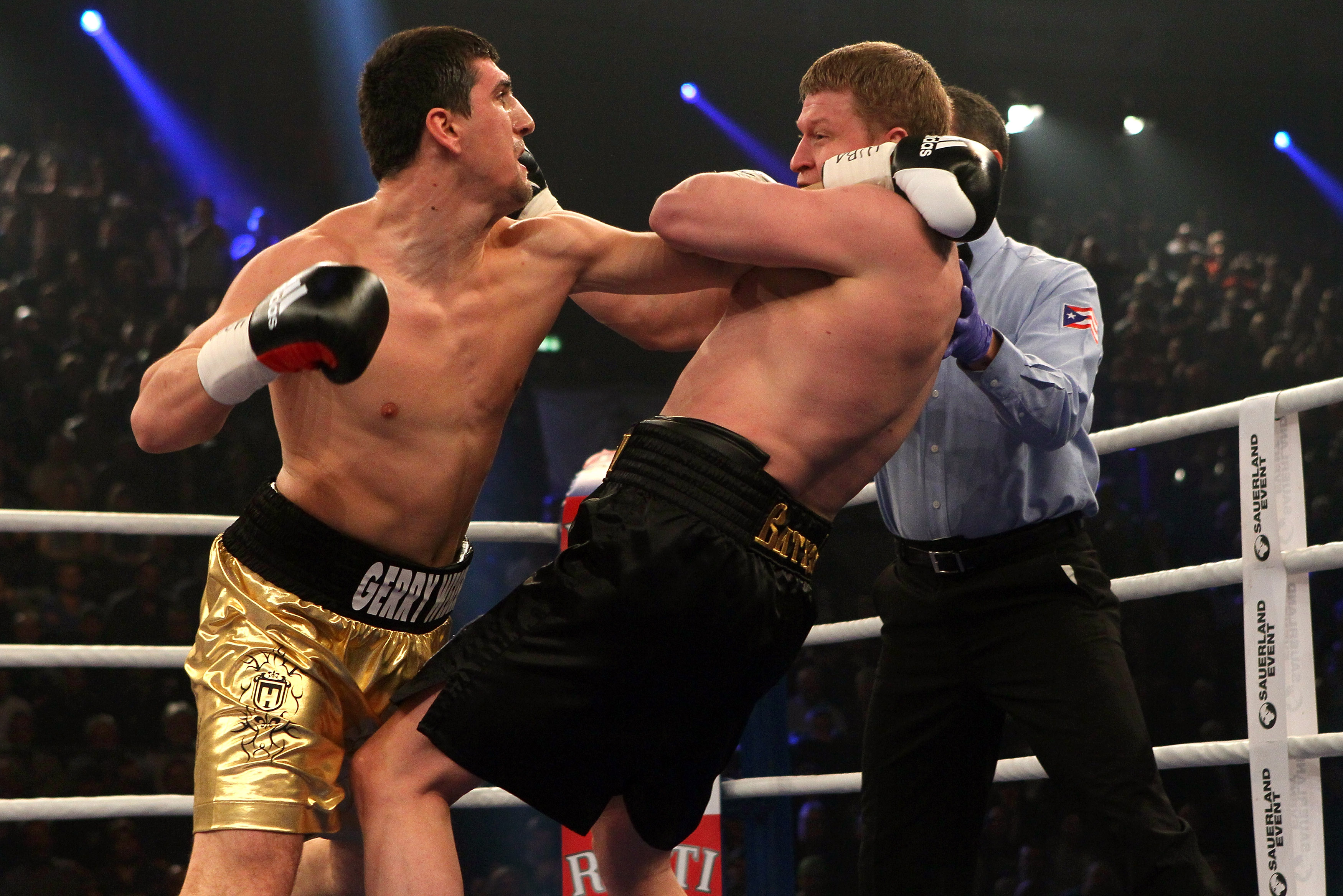 The Mandalorian fans thrilled as Star Wars legend finally makes debut in season 2 – but did you spot him?
World News