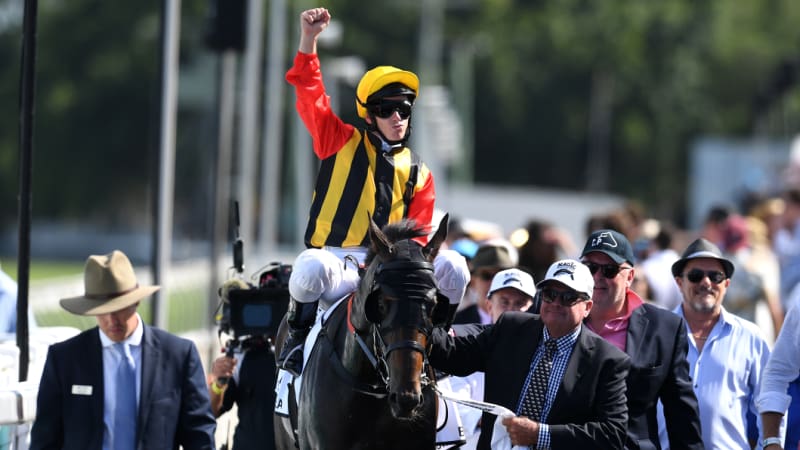 Trainer Chris Munce knew Boomsara wouldn’t give in, even when the challengers looked to have his measure, and he was right as his star took the Magic Millions Guineas in a thrilling finish at the Gold Coast on Saturday.

The Spirit Of Boom gelding had crossed from the outside barrier to lead and at the top of the straight he was there to be beaten. Bondi to his outside threatened, then got past him, but Boomsara was too tough. 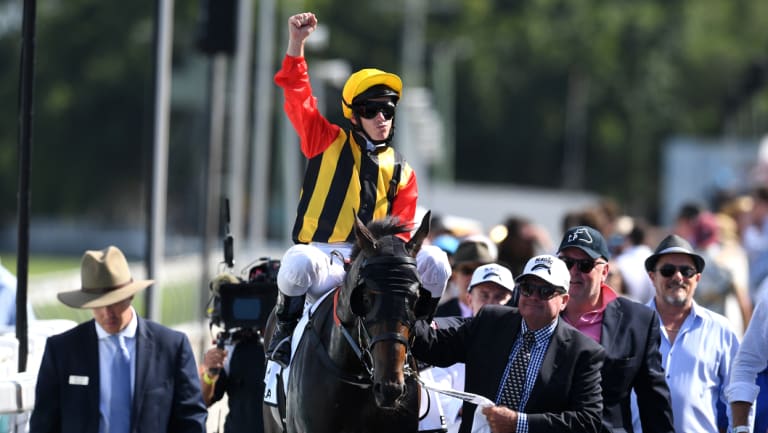 Salute: Tim Clark celebrates after winning the Magic Millions Guineas with Boomsara after a thrilling finish.Credit:AAP

Favourite Outback Barbie came off the leader's back, charged, but it was too late.

As they flashed past the post the margin were a nose and nose between the three of them but it was Boomsara's day in the colours of Eureka Park, where he was born and raised.

Munce was delighted to be able to get Tim Clark to ride Boomsara, when Damian Browne was ruled on Friday after having emergency surgery for a perforated bowel on Friday.

“I knew they wouldn't get by him when he was in front. He travelled nice. Timmy [Clark] rated him beautifully and he started to coach him up from the 600. It was the right thing to do on him,” Munce said. “That’s why you put him on. When I was looking for someone to replace Browney he was my first option.

“I know what it is like to be in that position on both sides as a jockey and I’m really thinking about Damian, but he will be back again.

”This is unreal, definitely better than winning as a jockey because of all the work that goes into it when you train.

“I knew this horse was better after the Vo Rogue but when the barrier draw came out I was bit worried but he is very tough.”

Clark was quick to remember Browne as well after his brilliant ride and admitted Bondi headed him in the straight.

“I was pleased to get the phone call and Chris (Munce) was confident. I was just the lucky recipient at the other end of the phone,” Clark said. “I couldn’t quite get away from them at the top of the straight, Bondi got past me, but to his credit he picked himself up off the canvas and sustained a good gallop.”

Clark was able to get Boomsara to kick and kick again and even Kerrin McEvoy on the runner-up Bondi thought he had his measure.

James McDonald, on Outback Barbie, ended up protesting third against second as the the leaders drifted out in the straight.

“We just left it a bit late but she was charging at the end,” McDonald said.

This was a win for Queensland and third-generation breeder Scott McAlpine, who raced Spirit Of Boom, which has become a stallion sensation. While he had a remarkable first season, a big race win had eluded him.

McAlpine turned down massive offers from the Hunter Valley after Spirit Of Boom's first season and he is not going to leave Queensland.

“We are third-generation breeders and we have been waiting for a horse like him all our life,” McAlpine said. “The offers came for the stallion but he wasn’t leaving.

“We race about half a dozen of his progeny and to be a part of winning this is a highlight for me.

“Chris came to me and said he liked the horse and a couple of my mates wanted to stay in, so I was really happy when he got, so we could.

“He has done a great job with him and this caps off what has been a great for Spirit Of Boom’s career.”

Kim Kardashian Says She Was Supposed To Have Her Own Barbie, But Deal Was Cancelled