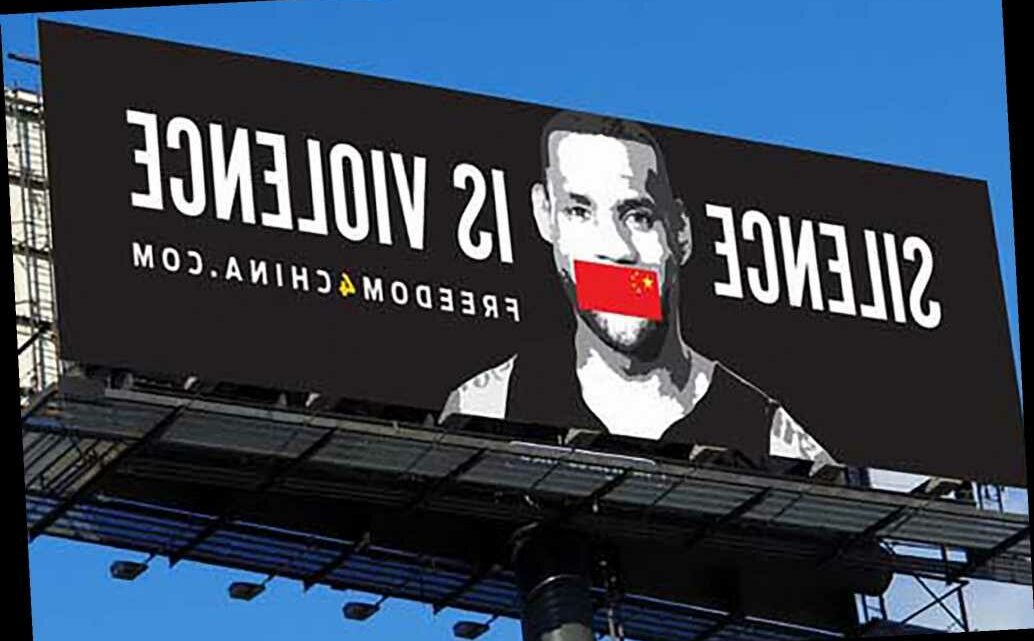 A government watchdog recently tried to post a bold message on giant billboards during he NBA finals about LeBron James’ refusal to speak out against Chinese human-rights abuses, but was rejected by the sign company.

The Virginia-based National Legal and Policy Center was poised to spend “several hundred thousand dollars” on five billboard images showing the superstar with a Chinese flag covering his mouth and the message, “Silence is Violence.”

The billboards were set to be displayed near the entrance to the NBA Bubble near Orlando, Fla., where James’ LA Lakers are battling the Miami Heat for the NBA championship.

But Outfront Media refused to put up the ads for fear of upsetting the famously outspoken James, according to an email from the company viewed by The Post.

“We cannot accept the ad as it is right now,” wrote the rep for Outfront, adding that the company would only put up the billboards if the NLPC agreed to remove the baller’s image. “The Chinese flag is Ok, and the silence is violence is ok,” he said.

But the conservative think tank is standing its ground. “Some messages are too important to be suppressed,” said Peter Flaherty, chairman of NLPC. “When it comes to human rights in China, silence is indeed violence. We should be able to call LeBron on his hypocrisy without this censorship.”

James, who often speaks out about race and police brutality in the US, came under fire last year when he criticized the Houston Rockets’ General Manager Daryl Morey for expressing his support for pro-democracy protestors in Hong Kong. “I don’t want to get into a word or sentence feud with Daryl Morey, but I believe he wasn’t educated on the situation,” James said at the time.

The comments sparked outrage among Hong Kong protesters, but were praised by Chinese Communist officials. James has a lifetime endorsement deal with Nike, whose Chinese-made products in his name have brought in hundreds of millions of dollars. Last week, James, whose net worth is $480 million, reportedly bought a $36 million mansion in Beverly Hills.

The NLPC says James has been silent about the Chinese “slave labor” that makes the basketball legend’s Nike sneakers, which retail for $200 a pair.

The NLPC went back to the drawing board and came up with different versions of the ad, but those too were met with rejection and then silence from Outfront.

“They just stopped returning our calls and emails,” said Tim Cramer, an executive with Operations at Mosaic, an LA-based advertising frim that created the ads. “They thought that we were singling him out and were afraid that the ad would hurt LeBron’s feelings. But we were never going after LeBron James the person. We were going after his brand.”

Another NLPC official, Tom Anderson, said, “It’s utterly amazing LeBron James can buy a $36 million Beverly Hills mansion from a bubble designed to cut him off from the outside world yet he can’t find a way to champion basic human rights for all people, including those suffering under the Communist regime of China.”

Neither Outfront nor James’ reps returned requests for comment. A spokesman for Nike said the company “takes very seriously any reports about forced labor and we have been engaging with multi-stakeholder working groups to assess collective solutions that will help preserve the integrity of our global supply chains.”