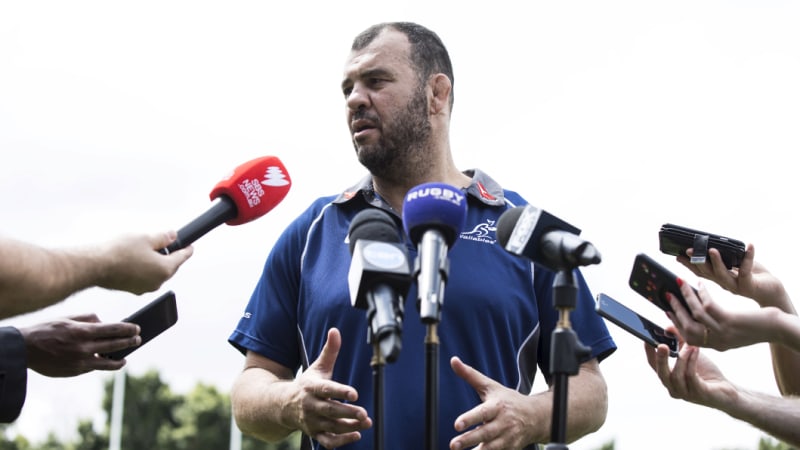 Australian coaches paying a high price for hogging the spotlight

Here’s a stat. For 20 years, from 1962 to 1982, the Australian rugby union team had a negative win-loss ratio, yet it only changed coaches on average every five years. Since 1995, it has had a win-loss ratio nearly twice as good – and yet it has changed coaches twice as often. The better the Wallabies have got, statistically, the shorter the coach’s life span. 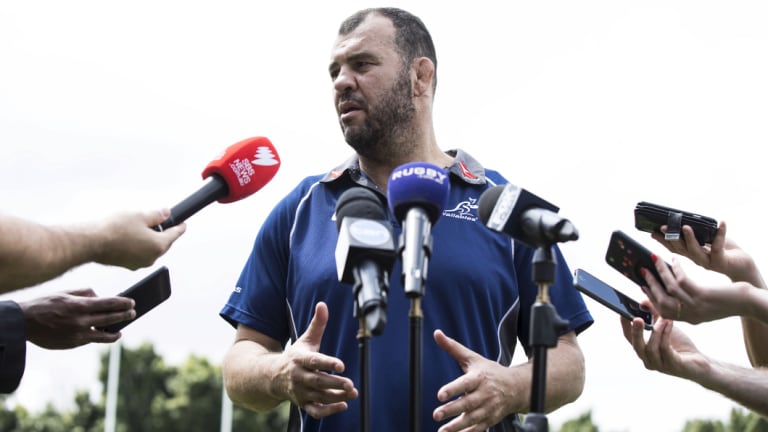 Spotlight: There is little doubt Michael Cheika commands more attention than any of his players.Credit:Dominic Lorrimer

Against this backdrop, Michael Cheika’s days are of course numbered. But there is something else at play here beyond the simple fact of his team’s statistical record. Across sports, Australia has developed a cult of the coach, where coaches are paradoxically more prominent and less powerful than ever before.

Somehow, coaches have become bigger than their players. Cheika is the best-known Wallaby, even though he isn’t one. The face of the Australian cricket team is Justin Langer. Rugby league’s back pages are dominated by coaches (while the players are relegated to the scandal sheets of the police and court reports). It’s as if the coaches have become the stars, but the price they pay for their stardom is that when a public execution is called for, they will be their sport’s Marie Antoinette. It’s a savage bargain, backed by a strange logic.

More than ever, coaches are judged by ‘their’ success. I use the inverted commas, because it’s not ‘their’ success at all. Believe it or not, coaches aren’t players. Their actual influence varies greatly from sport to sport, sometimes depending on the nature of the game (an American football coach, micro-managing each play, is more influential than, say, a cricket coach), and sometimes depending on the layer of high-performance oversight that has been imported into most elite sports. 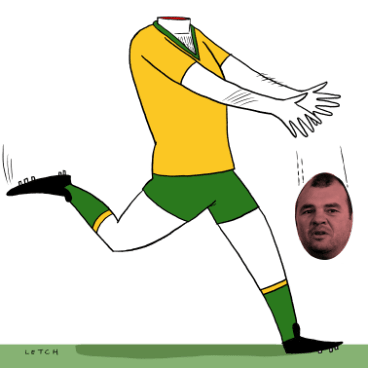 But the bottom line is that the coach is not on the field influencing events. He is in fact the number one spectator, in the grandstand with his face in his hands, wondering why nothing ever goes the way he hoped. He is not one of them; he is one of us.

Nevertheless, he is increasingly treated as if he were a player. The NRL coaching frenzy has been conducted with a desperation suggesting that a coach is not just equally as important as the team that goes out on the field, but more so.

Super-coach as silver bullet: a novel idea, but one that is so prevalent now in Australian professional sport that it is almost taken for granted, as if it had to be true.

To understand how we got here, we can continue using rugby as an example, casting back to the 1982-95 era of Alan Jones and Bob Dwyer, vivid if contrasting personalities who were Wallabies coaches during a peak period: Grand Slam, Bledisloe Cups and a World Cup fell in Australia’s lap. Neither was shy of claiming ownership over those successes. It didn’t hurt that they had David Campese, Mark Ella, Nick Farr-Jones, Michael Lynagh and a host of other once-in-a-lifetime players at their disposal. But Australia was too busy celebrating, and hailing the cult of the coach-as-puppeteer, to ask too many questions about cause and effect.

At the same time, the role of international cricket coach was invented by Bob Simpson in 1986. Test cricket had survived for 109 years with the coach as the vehicle that took the team to and from the ground (thanks, Chappelli), but within a few years the role became indispensable. Since then, the position has spread horizontally across the globe, and vertically, spawning a massive staff of assistants and sub-coaches within each team. 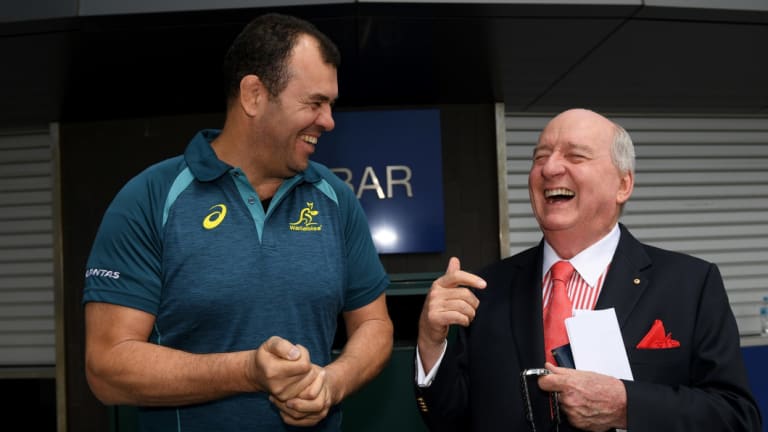 India’s Virat Kohli, it is reported, last year reasserted the power of the captaincy and had Anil Kumble replaced as coach with Ravi Shastri. Indian players have long reserved this power for themselves. In Australia, is there anything less likely than Tim Paine sacking Justin Langer, or Steve Smith sacking Darren Lehmann (as opposed to taking him down with him)?

Now that we have got here, however, the coach is a curious hybrid of public profile and private ambiguity. Last March, when the Australian cricket team was caught cheating, Lehmann refused to resign. This surprised many, who assumed that as a strong personality and a recognisable ‘leader’, Lehmann must have known about the team’s plan to cheat or at least looked the other way and allowed it to happen. Taking Lehmann’s claim of innocence at face value, perhaps we were being told something else: that the national cricket coach, the fellow who gave more media conferences than the captain, was not as important as we took him to be.

Australia has developed a cult of the coach, where coaches are paradoxically more prominent and less powerful than ever before.

Lehmann’s subsequent resignation was equally instructive. He stepped down not because he had knowledge of any cheating, but in response to public opinion. Unwittingly, this perhaps revealed the true role of the modern coach: he is not the actual team leader, he is certainly not a participant in the game, but he does serve a purpose as a layer of bureaucracy whose role is to take blame.

The buck stops with the coach, not because the coach is the mastermind of all that is good and evil, but because his designated part in the bureaucratic structure is the person who gets sacked when public pressure reaches a threshold where his superiors must be seen to act. 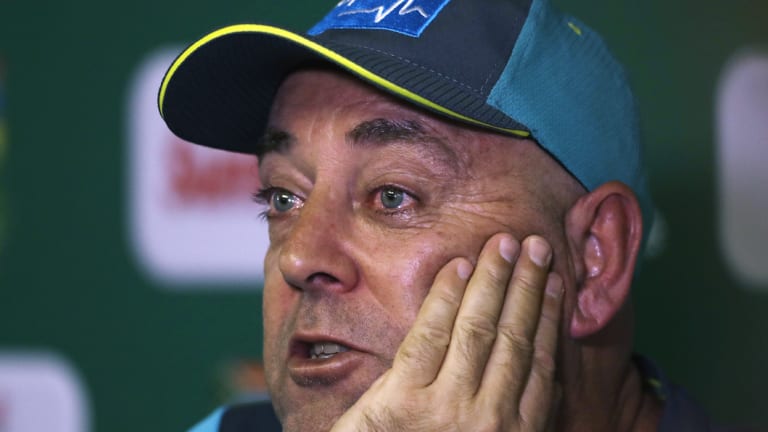 Looked at in this light, the debate around professional sporting coaches becomes clearer. Whether the coach is guru or mastermind or the person who picks up the balls at the end of practice, his or her public role is to feed the neuroses of a constituency who are either too confused or too emotionally divided to identify where real responsibility lies. When the outcry for change reaches a certain point, and it is impossible to sack all the players (because they really are indispensable), the easy solution is to sack the coach. It provides the appearance of action and keeps everyone else in their jobs.

The outcry is not just from the public, either. Organisations like Rugby Australia have corporate sponsors who want to be associated with success. As a matter of governance, sporting chiefs have to be seen doing something to protect their positive brand linkage with these partners. It’s a terrible prospect, but somebody is thinking that Cheika’s sacking would be good for Qantas.

Being sacked, then, is one of the coach’s prime functions, even more crucial than coaching. We in the media fall victim to this as much as everyone else: sacking the coach has become our solution of convenience.

Coaches themselves also aggravate this problem. By obscuring their methods, by their attitude of paranoid secretiveness, they lead us and the public to overestimate their influence – and therefore to line them up when things go bad. When you don’t really understand the ins and outs of a sporting body, it’s easiest to assume that a fish rots from the head. Easier still to assume that the head is the coach.

Accountability, as we see routinely in royal commissions into our once-respected public institutions, is largely a matter of manipulating symbols: a question of language. So it is with sporting coaches. Cheika is no doubt thinking the same as the heads of the banks or, the erstwhile Cricket Australia chairman David Peever or, indeed, Darren Lehmann during those few days between denial and acceptance: that he personally has done nothing wrong. And there is the disconnect: he might well have done nothing wrong, but in his appointment to that role, he has already accepted that he eventually fulfils his function by satisfying the clamour for a beheading.

Coaches’ influence is increasingly, almost manically, overestimated. In the structure of Australian rugby, Cheika is said to have more power than most. But what kind of puppeteer is a coach really? As Cheika so amply dramatises during Wallabies games, the coach is powerless over events, one of us, the fan in chief. There is a catharsis in his removal, but we might as well be sacking ourselves. Change for change’s sake feels cleansing. But the ultimate effect is as illusory as the power we thought he commanded.