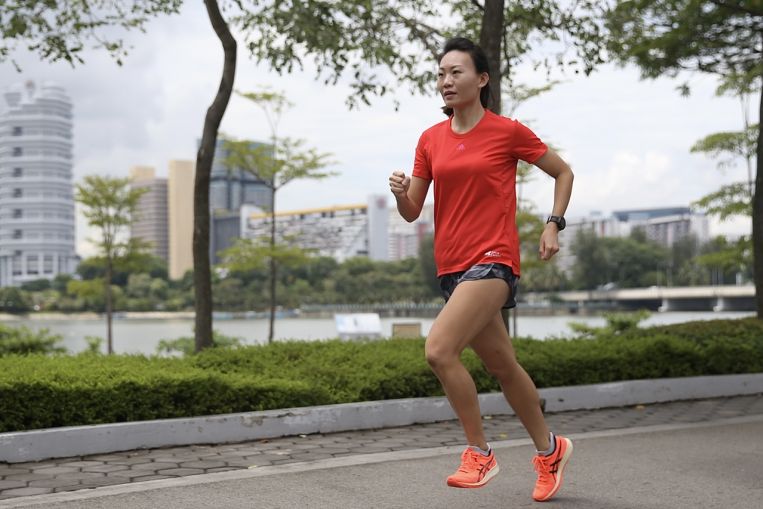 SINGAPORE – It has been nearly two years since national marathoner Jasmine Goh competed at an elite level and she will finally get to dust off her racing shoe on Sunday (Nov 14).

She is part of the 17 strong elite field in the 2021 Great Eastern Women’s Run, the first running event to conduct a high-level in-person race during the pandemic.

The first competitive mass participation sporting event held here since the circuit breaker in April last year was the MetaSprint series aquathlon in March this year.

Goh, whose last race was the Standard Chartered Singapore Marathon in December 2019, was happy the elite race was converted to a physical one as she has missed in-person races.

The 42-year-old explained: “Racing physically with others is very different. Hanging out with all the ladies pre- and post-race adds another dimension to racing, it’s the camaraderie and the bond that we have with each other that is often only seen at a physical race.”

Neo Jie Shi, who took part at the 2016 Olympics, is also looking forward to racing alongside others as she found it difficult to stay motivated during the pandemic.

The 36-year-old human resources and administrative manager said: “When working from home first started last year, I found myself putting in more hours at work and running irregularly. Without physical races, there was no motivation to set a goal and train consistently for it.”

That has changed with the Great Eastern event but while she has a targeted time in mind, she is trying not to focus too much on it. “More than time or placing, I want to just go out there, push my limits and have fun along the way. My main goal is to complete the race feeling proud that I have given my best, whatever the results may be.”

The half-marathon route starts and ends at the Singapore Sports Hub, taking the runners along East Coast Park in a loop.

No roads have been closed for the event, and water points and medical points will be placed along the way, with seven marshals guiding the runners on bike.

To avoid the morning crowd, the race, which was originally set to be a virtual edition but was later converted to a physical race, will start at 5.30am.

All 17 invited participants must be fully vaccinated and produce a valid negative antigen rapid test result taken after 9am today.

They have to be masked at all times until they reach the start pen for the flag-off. They will be flagged off at the same time.

No spectators are allowed.

Asked about the strict protocols, Goh said: “The organisers have been keeping us in the loop throughout this period and all of us were kept updated with the necessary safe management measures… we have full trust in the organisers that this will be a safe and enjoyable race!”

The in-person nature of the event comes as Covid-19 restrictions in the sports sector continue to be eased.

On Monday, the Government announced that 10 fully vaccinated persons could play together in supervised settings under the vaccination-differentiated safe management measures (VDS) + antigen rapid test (ART) protocol at selected ActiveSG sports centres and People’s Association community clubs from Wednesday. This pilot would pave the way for team sports to return.