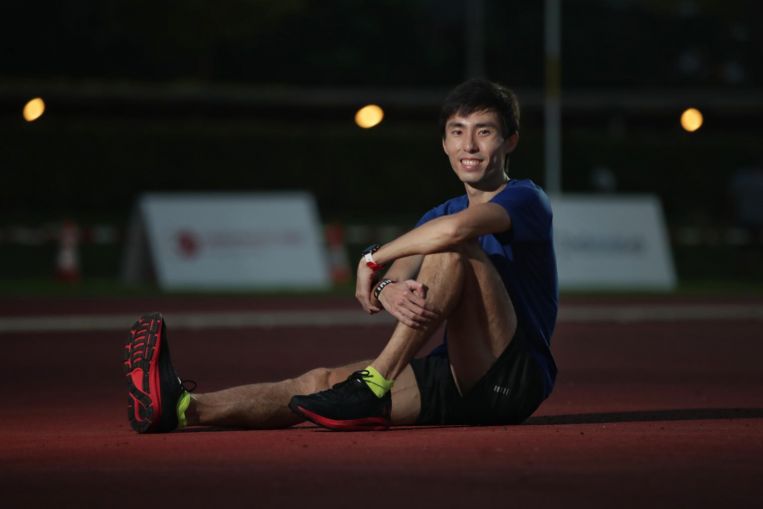 So comfortable was he on the Home of Athletics track at Kallang that he easily cleared the qualifying mark for the year-end SEA Games in Vietnam with his 4min 5.19sec performance.

His time also betters the gold medal winning time of 4:06:63 clocked by Vietnam’s Duong Van Thai at the 2019 SEA Games in the Philippines.

However, it is uncertain if Soh, who won the marathon gold at the 2015 and 2017 editions of the SEA Games, will get the nod for the 2021 edition if he is nominated by Singapore Athletics. The Singapore National Olympic Council’s selection committee meets in August.

Ahead of the 2019 Games, he was not selected as the SNOC’s selection committee said then that Soh’s “attitude and behaviour” in the two years prior fell short of what it expected of national athletes.

The SNOC and Soh had previously clashed on a number of occasions, including before the 2017 SEA Games when he was issued a formal warning by SNOC over a breach of regulations regarding the promotion of his personal sponsors on social media during the Games. He had also reportedly upset Singapore Athletics sponsor 2XU after cutting holes in his race vest during the marathon final.

Soh’s non-selection had sparked a debate over whether a potential medallist should be barred from representing the country because of issues pertaining to conduct.

Soh, who had not competed on the track since June 2019, told The Straits Times on Saturday that he would be “happy to race” at the Vietnam SEA Games if selected. He is also aiming to qualify for the 5,000m and 10,000m, which were his pet events before he switched to the marathon in late 2014.

When asked how he would feel if he were not selected again, he said: “I wouldn’t say I would be disappointed, but I would be looking for some answers. Because I don’t think you can keep an athlete out of the SEA Games indefinitely, especially when he has qualified hard and fast.”

The SNOC’s website states that selection for the Vietnam Games will also be based on non-performance related considerations such as “attitude and behaviour… whether in relation to sporting matters or otherwise”, general conduct and character and past disciplinary records.

Singapore Athletics president Lien Choong Luen noted that nominations are not due until July, instead pointing to others who have hit qualifying benchmarks. High jumper Michelle Sng, who won gold at the 2017 SEA Games, also met the qualifying mark for this year’s Games, clearing 1.78m.

“We are really happy they have met these marks, and it shows they are progressing well,” said Lien. “In the case of Rui Yong, to get such a good time in an event he doesn’t race regularly hopefully means he will also do well in his pet events. We have time (before nominations are due) and we can have a conversation around what our overall strategy is.”

Soh, 29, said he decided to switch his focus to the track for the first half of the year because marathon racing opportunities are limited during the pandemic.

But he eventually aims to return to the marathon. He will be competing at the Chicago Marathon in October, when he hopes to qualify for the Asian Games and Commonwealth Games, which both take place in 2022. The benchmark for the Asiad is 2:23:42 – the same as Soh’s national record – and the Commonwealth Games’ qualifying mark is 2:22:39.

“I’m a marathon runner, that’s my identity,” he said. “I love doing these other (events) too but eventually, if I’m going to reach a higher level of success, it’s in the marathon.”

Soh’s plan has been boosted by a four-year endorsement deal with apparel brand Under Armour to be a part of its global athlete programme, signed earlier this year. While he declined to reveal financial terms, it is understood to be worth a six-figure sum.

A major pull factor, he said, was the chance to train with Dark Sky Distance, Under Armour’s professional running team based in Arizona.