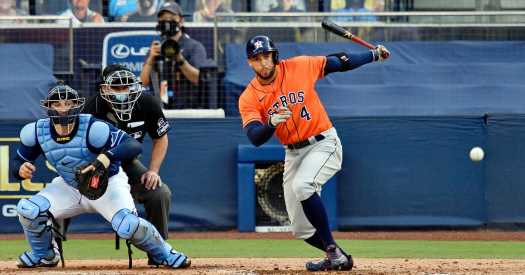 Astros Battle Back to Force a Game 7 Against the Rays

Charlie Morton threw the final pitch for the 2017 Houston Astros, perhaps the most notorious World Series champions in major league history. Morton never batted in Houston that season, so he never got a sign from a teammate banging on a trash can. But those who did, he knows, were dangerous hitters even without the illicit help, and they are proving it again in the American League Championship Series.

“For me it just goes without saying: If you assumed that the Astros weren’t going to be a good team, if they weren’t going to put together good at-bats, it’s just ignorant — it was just a wrong mentality to have,” Morton said Friday night, after his Rays fell to Houston, 7-4, to set up Game 7 on Saturday in San Diego. “I’m not surprised by what they’ve done; I’m not surprised by what they did in the wild card or the division series — because they’re good. They’re really good.”

It was easy to forget that with only a cursory look at the first three games of this series. The Rays won them all, pushing the Astros — who went 29-31 in the brief regular season — to the brink of elimination. But every game was close, the Astros consistently hit the ball hard for outs, and the Rays capitalized on a sudden bout of throwing woes by Houston second baseman Jose Altuve.

In the last three games, the Astros’ luck flipped. On Friday they became just the second team to force a Game 7 after losing the first three games of a best-of-seven series. And now it falls to Morton, who won Game 7 of the A.L.C.S. and the World Series for Houston in 2017, to keep the Rays from joining the 2004 Yankees with a dubious distinction.

Those Yankees, who famously lost to the Boston Red Sox in the A.L.C.S., are the only team to ever drop a series after leading by three games to none. Morton, who grew up rooting for the Yankees in Redding, Conn., will start for the Rays on Saturday, hoping to steer them to another winner-take-all victory. They did it a week ago in their division series with the Yankees.

“There has to be the realization that the series is tied, and this is similar to where we just were with the Yankees,” Morton said. “So I think the quicker we can get off of this loss we just had, the quicker the better, and just use it as motivation. The guys over there, they’re not messing around. I think we realize that. We’re going to have to come out tomorrow and fight the whole game.”

Morton, a 13-year veteran, has by far the longest major league tenure of anyone on the Rays. He left Houston after the 2018 season to sign with Tampa Bay for two years and $30 million, giving him the highest annual salary on the team.

It was a typically wise investment by a savvy organization; Morton, 36, is 18-8 for the Rays with a 3.33 earned run average. He has been even better in the last two postseasons, winning all four of his starts with a similar line every time: five innings, three to five hits, zero or one earned run allowed.

“He’s the been-there, done-that guy,” Rays Manager Kevin Cash said. “We’ve relied on Charlie quite a bit in his two years with us. Not sure if there will be a game bigger than this one to rely on him, but we’re confident that his poise and his experience will allow us to get off to a good start and see if we can get some runs on the board for him early.” 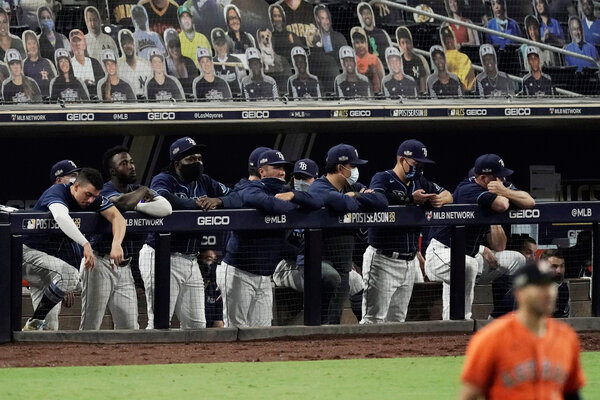 The Rays could not do that for Blake Snell in Game 6, looking nearly helpless against the sharp curveball of Houston’s Framber Valdez. They led by 1-0 after four innings, but when Snell allowed a walk and a single to start the fifth, Cash removed Snell for Diego Castillo.

Valdez was throwing so well, Cash said, that he figured it would be a low-scoring game. That heightened his urgency to call for Castillo — who had six spotless playoff outings — at the first sign of trouble. Snell, the 2018 A.L. Cy Young Award winner, was dismayed.

“Even with the walk and the ground ball, I still felt very, very, very confident that I was going to get through that lineup,” said Snell, adding that he wished he had pitched longer to give Castillo more time to warm up.

“If he has the time that he needs, he’s going to be lights-out,” Snell said. “So it’s just frustrating. I thought: ‘Give me a chance to get out of that.’ I really feel like with how I was pitching and the way that I was going through that game, I felt like that would have been what was best for us, in my mind. But Cash is usually — he’s always right.”

For most of this postseason, every one of Cash’s moves has indeed seemed to work. Before Game 6, Rays relievers had stranded 21 inherited runners, the most ever by a team to begin a postseason. But the streak ended quickly in the fifth, with a sacrifice bunt by Martin Maldonado off Castillo and a two-run single by George Springer.

Altuve doubled home Springer, and Carlos Correa singled in Altuve. It was 7-1 by the seventh-inning stretch, and while two late homers by Manuel Margot got the Rays closer, they still reached the precipice of ignominy.

The Rays, of course, would rather focus on the opportunity Game 7 presents, not the three-game losing streak that forced it.

“People are in this situation all the time,” Rays catcher Mike Zunino said. “If we got to this point in any other way, I don’t think that would be a talking point. So I think we’re re-focused, we’re ready to go tomorrow. The clubhouse is picking up energy already.”

In Morton, the Rays will have their best option at the start of the game. But the Astros’ starter, Lance McCullers Jr., can also draw encouragement from a Game 7 memory: After Morton started Houston’s clinching shutout of the Yankees in the 2017 A.L.C.S., McCullers relieved him and finished with a four-inning save.

The Astros were an uplifting story then, a team of personable, passionate players seeking the first World Series title for a city battered by Hurricane Harvey. Their sign-stealing scandal tarnished the achievement, but this week’s comeback, at least, has added a new twist in a saga that keeps evolving.

“This team has battled back, big-time,” Manager Dusty Baker said. “You’ve got to love this team — or, some people hate this team. But you’ve at least got to respect this team.”