Home » Sport » Ashleigh Barty, Back on the Court, Is Top Seeded at Home 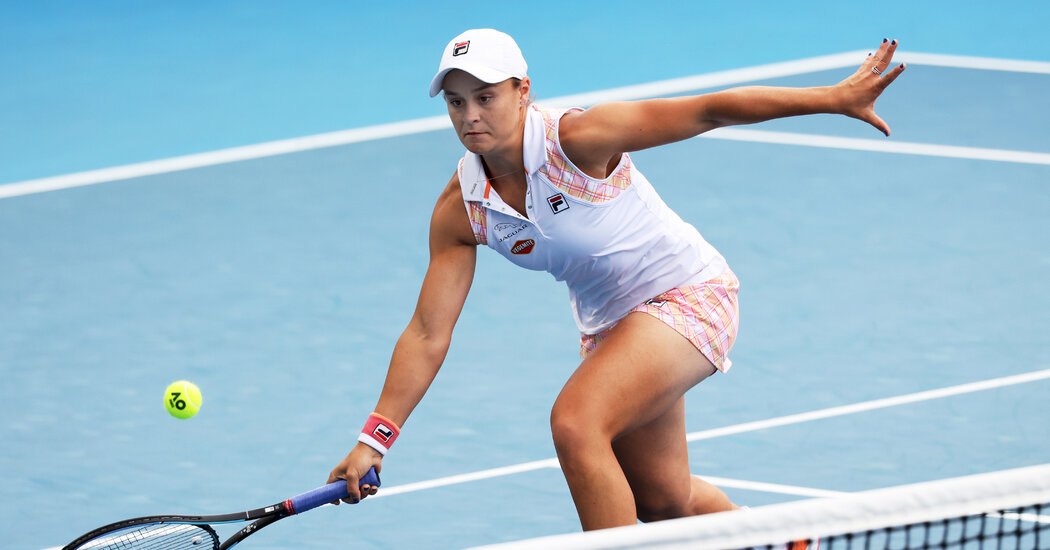 Ashleigh Barty, Back on the Court, Is Top Seeded at Home

Top-ranked Ashleigh Barty once more sits atop the Australian Open women’s singles draw that was made Friday afternoon in Melbourne, and gives her country its best chance to win its home Grand Slam.

Barty has held the No. 1 ranking without interruption since September 2019. But that streak, made possible by the WTA Tour keeping 2019 ranking points intact during a season of upheaval, does not quite reveal the reality of her last 12 months.

Before this week, Barty had not played a tour match in nearly a year. At last year’s Australian Open, she was seeded No. 1 and lost in a semifinal to the eventual champion, Sofia Kenin. Then, when the coronavirus pandemic disrupted sports, she stayed home in Queensland and remained there even as some tournaments were held in other parts of the world.

Barty has looked strong in a warm-up tournament this week at Melbourne Park, reaching the final of the Yarra Valley Classic after a withdrawal from Serena Williams. Still, it is yet to be seen how she will perform during the Grand Slam tournament, which is scheduled to begin Monday, given her limited match preparation.

Barty’s path in the women’s singles draw is largely favorable. She opens against 77th-ranked Danka Kovinic. Should Barty reach the semifinals, she could get a rematch against Kenin, who is seeded fourth this year. Kenin, who also reached the finals of the French Open in October, has said she is uneasy about defending a Grand Slam title for the first time.

“Obviously very nervous, but I’m going to do my best and we’re going to see how it goes,” Kenin said this week.

Kenin received a seemingly comfortable opening match against the 130th-ranked wild-card Maddison Inglis, but could face trouble in the second round, where she would have to face frequent giant-killer Kaia Kanepi or the 2018 U.S. Open semifinalist Anastasija Sevastova.

The 2019 Australian Open champion, Naomi Osaka, sits in the bottom half of the draw seeded third, where she landed one of the most brutal opening challenges: Anastasia Pavlyuchenkova, a talented Russian veteran who has reached the quarterfinals each of the last two years in Melbourne.

Tenth-seeded Serena Williams, who is seeking her 24th Grand Slam title, could await whoever advances from Osaka’s quarter of the draw. Williams opens against the combative Laura Siegemund, but her toughest test might come from the enigmatic player who looms in the fourth round: seventh-seeded Aryna Sabalenka. Despite the pandemic-decimated schedule, Sabalenka has won four WTA titles in the last 12 months, including the final two tournaments of last season and the first of this year. But Sabalenka has not played well at Grand Slam events, only once advancing to even the fourth round in 12 main draw appearances.

Whoever advances from Williams’s and Sabalenka’s section very likely has a tough battle on her hands in the quarterfinals as well, with both second-seeded Simona Halep and 15th-seeded Iga Swiatek looming. Swiatek won the French Open in October.

On the men’s side of the tournament, the already dim hopes among American players got even dimmer after the draw.

With the highest-ranked American man, John Isner, choosing to stay home, 27th-seeded Taylor Fritz is the lone seed from the United States in men’s singles. He could face the next-highest ranked American man, his friend Reilly Opelka, in the second round. But whoever comes out of that part of the draw would most likely run into the buzz saw of Novak Djokovic in the third round.

The top-seeded Djokovic, who has won eight Australian Open titles including the last two, opens his tournament against the Frenchman Jeremy Chardy, and could face another young American, 2019 quarterfinalist Frances Tiafoe, in the second round.

One of Djokovic’s toughest potential tests looms in the fourth round, where he could face the 17th-seeded Stan Wawrinka. Wawrinka is one of only three players to have beaten Djokovic in Melbourne in the last 10 years. He did so in the 2014 quarterfinals en route to winning his first Grand Slam title.

Djokovic could face third-seeded Dominic Thiem in the semifinals in what would be a rematch of last year’s final. Second-seeded Rafael Nadal, in his first try at breaking the Grand Slam men’s singles titles record after tying the absent Roger Federer at last year’s French Open, opens his tournament against the 56th-ranked Serbian player, Laslo Djere.

Two of Nadal’s most intriguing possible early opponents play each other in the first round: 21st-seeded Alex de Minaur, who is the highest-ranked Australian man, and Tennys Sandgren, the Tennessean who had seven match points against Federer in last year’s quarterfinals but could not convert any of them.

Nadal could face the fourth-seeded Daniil Medvedev, who is on a 12-match win streak after winning the ATP Finals and Paris Indoors Masters last fall, in the semifinals.

The draws on Friday were delayed one day because of problems with the coronavirus. A quarantine worker at one of the hotels where players were staying tested positive, prompting tournament officials to halt activities on Thursday. Instead of a splashy, prime-time ceremony to reveal the first-round pairings, the draws were done in a back room and streamed online.

Man, 23, who killed his girlfriend's baby is found guilty of murder
World News